England Shows Strengths and Weaknesses in Draw with the USA 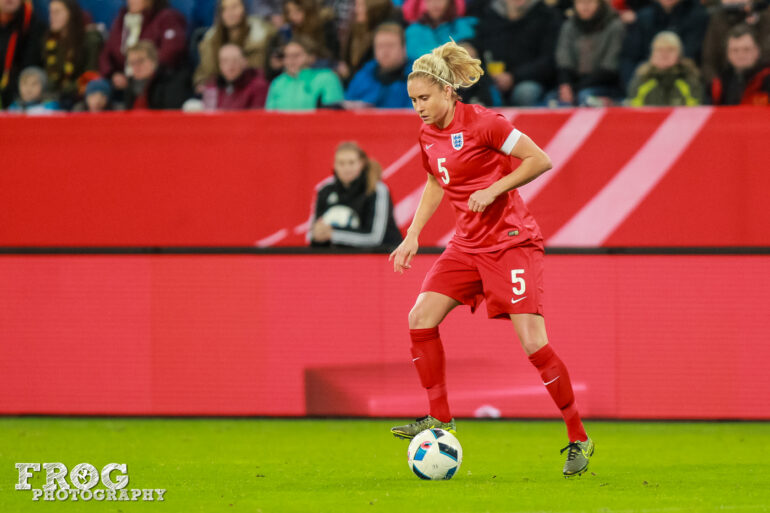 England played out an exciting, confusing, thought-provoking, and all-round tense 2–2 draw with hosts the United States in their second SheBelieves Cup game.

It leaves Phil Neville’s side with a good chance of tournament success if they beat Japan in their final game on Tuesday night and his team showed both the positives and negatives which have been glaring at either end of the pitch for a while now.

Neville experimented to an extent, making four changes to the team that beat Brazil but it was a change to one player who has started both which was the main eye-catcher.

Lucy Bronze was deployed in midfield from the start after a brief cameo there against Brazil and it was an experiment which certainly provided mixed results, but more on that later.

But England were almost left as red-faced as their shirts inside 90 seconds when Abbie McManus had to clear a corner off the line after Karen Bardsley failed to make a connection with Megan Rapinoe’s in-swinging corner.

Rapinoe, though, would make the difference after half an hour when she chested down a Rachel Daly header and promptly smacked one into the top corner, leaving Karen Bardsley rooted to her six-yard box as if cemented to the spot.

England, though, responded when Adrianna Franch had an uncomfortable moment less than two minutes after falling behind; the debutant picking up a back pass which would prove costly when Lionesses captain Steph Houghton curled home her 12th goal for her country from Toni Duggan’s layoff.

From then on it turned into something of a strange match, one which showed certain qualities for both sides that are conducive to winning, or at least challenging, for a major tournament, but also exposed several qualities that may go a long way to stopping either nation lifting the trophy in July.

For England, it was the same old story. There was little wrong with the performance as a whole. No individual had a terrible night, some got minutes under their belts and Nikita Parris continued her fine form with a cool finish in the second half to put the Lionesses in front for the first time, but after that it went a little downhill for Neville’s side.

The second goal would have thrilled Phil Neville because it combined everything he was trying to achieve going forward on the night. Bronze drove a ball through the middle which was superbly flicked on by Fran Kirby into the path of Parris, with the Manchester City forward doing the rest.

But it was also a glimpse into what is holding England back — their greatest strength on the night exposing their greatest weaknesses. Kirby, brilliant in the second half against Brazil, had a quiet night and relies on getting on the ball and it just didn’t happen, not enough anyway.

In a very structured 4-2-3-1, England resorted to old habits in going long toward Ellen White on too many occasions and bypassing the very player who is integral to Neville’s system. Defensively, Kirby as No. 10 also doesn’t help the Lionesses.

Walsh had ups and downs throughout the match and certainly looked like a player who had played every minute of every game for club and country recently, while Bronze’s energy and drive would have been what Neville wanted to see but her passing was that of a right back being asked to play midfield.

The bigger issue was England’s midfield two constantly getting overran and left a lot of space for the U.S.’ midfield three, particularly in the first half. It would be unfair to say either side were bad, both had their moments and Neville will have been pleased to see Parris get on the score sheet, happy with some of Walsh’s calm passing between the lines, and probably quite happy with Rachel Daly’s quietly composed performance at right back.

What will have thrilled him less was one big fat elephant in the room that keeps cropping up time after time under Neville. Set pieces, corners, and more specifically, England’s complete inability to cope with them.

If the Clare Polkinghorne free header at Craven Cottage wasn’t a warning or Sweden’s scrambled second goal in Rotherham wasn’t a warning, then Megan Rapinoe’s first-minute corner that nearly beat everyone should have been.

It wasn’t. The second goal saw another corner not cleared, panic ensued, and Daly making a great clearance on the line before Tobin Heath bundled it home via Abbie McManus’s arm. Not long after, Julie Ertz headed a free kick against the post after finding herself completely unmarked in the England penalty area and it’s quite simply something England has to cut out and it’s worrying that there’s no clear improvement on what is now classed as a long-standing issue.

There was a lot to be proud of for the players. It’s good to see England taking chances and there’s certainly glimmers of what Neville is trying to do, but they were few and far between against a U.S. side not exactly looking like the world champions of four years ago.

Japan, despite their so-called weakened squad, has lit up the tournament in their two games so far and will likely prove England’s toughest test of the tournament. Neville has stated he selected his teams for each game before the camp but with certain players looking more than a little weary, it will be interesting to see who is used with many players still not having any minutes to their name after two games.

A win, and Neville goes home with a shiny trophy; anything else and it will be another mixed tournament with questions pending ahead of the April friendlies.