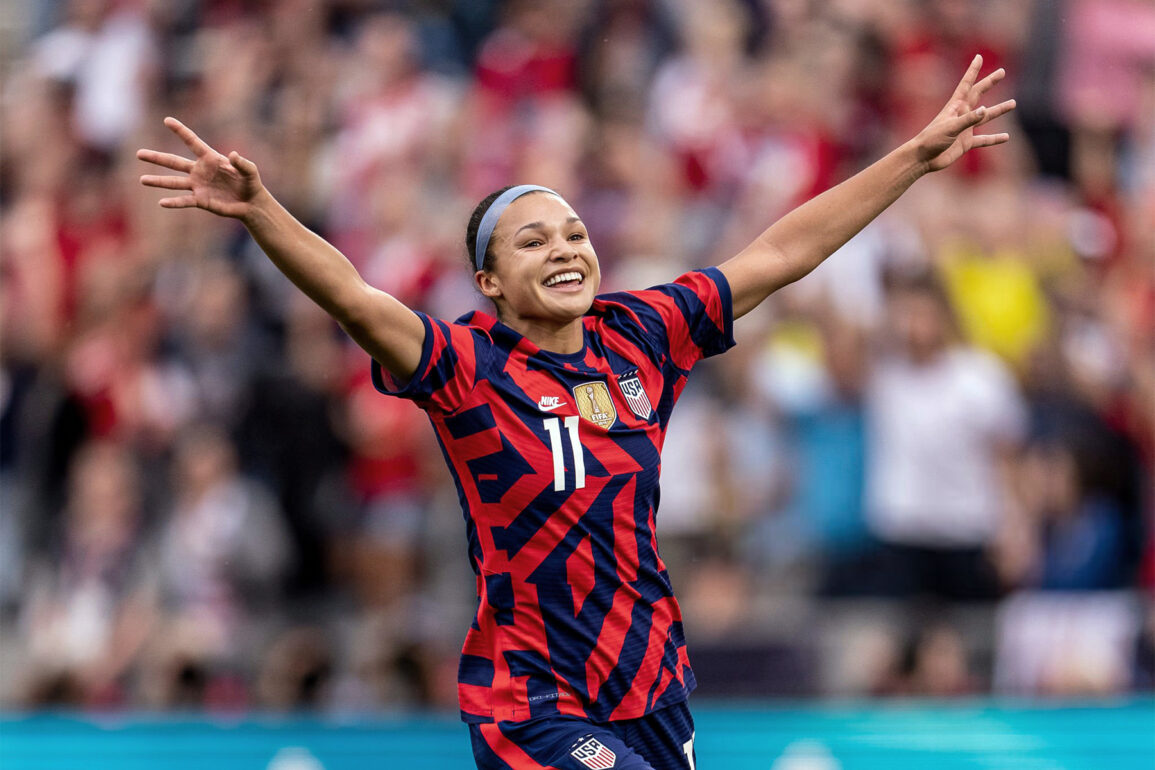 Sophia Smith says she is in a “happy place” as her own personal good form continued with a tenth goal of 2022 for the U.S. in a narrow 1–2 defeat to England at Wembley on Friday night.

The Portland Thorns star, who has enjoyed a superb domestic season in the National Women’s Soccer League, was a constant threat to the Lionesses back line and equalized after Lauren Hemp’s early goal when she hammered home an effort from the edge of the box after a high press from teammate Lindsey Horan.

Despite defeat, Smith continued to show at 22 years of age her ability to be one of the top players in the world, and is pleased with how things are going for her at the moment ahead of a trip to Spain on Tuesday.

“I think just confidence,” she said, when asked about her more consistent form throughout 2022. “I think I’ve really grown into the league, found my place in Portland and within the team, so I think for sure it’s a confidence thing.

“I feel every time I step on the field I can be myself and play free and just not like put a lot of pressure on myself. I’m in a happy place and yeah, that’s the biggest thing.”

Smith laughed when asked if she was on a “revenge tour” against those who wanted to see more from her at the back end of last year, saying, “I’m just continuing to do what I do and I’m trying not to pay attention to any of that stuff because everyone is going to have opinions. I’m in a good place like I said and I think that’s just allowed me to be myself.”

Finishing as the second top scorer in the NWSL regular season, just one behind U.S. Women’s National teammate Alex Morgan, it’s no surprise Smith proved to be the USA’s biggest goal threat at Wembley, stating her intent with an effort to test Mary Earps inside two minutes.

Smith largely played the striker role she has become familiar with at the Thorns, but drifted out wide to cause England’s full backs plenty of problems with her pace and movement, but she was happy to get a chance to play as the striker for the national team in the absence of Morgan.

“Yeah, I mean I was excited,” she smiled. “I was playing it all year for Portland so that helped a lot coming into it coming into this environment and doing the same. Any challenges are exciting for me, so I love to switch things up a little.”

It’s not inconceivable Smith could have had an assist to add to her goal, after she was judged to have been just offside in the buildup to what looked like a second equalizer, this time from Trinity Rodman.

It was the end of a flowing U.S. move that included Megan Rapinoe’s deft touch inside the box, but after a lengthy VAR check, Smith was ruled to have been just offside, though no camera angle appeared completely conclusive.

Despite the disappointment, Smith was really pleased by some of the U.S.’s link-up play heading into Tuesday’s match against Spain in Pamplona.

“It’s always exciting when we get to connect and put goals together. It sucks that the goal got called offside, but we just want to be able to continue to build like that and find each other, so it was an exciting thing for us regardless of the call.”

Smith also praised her team’s high press throughout the match that ultimately led to her goal, after former Thorns teammate Horan won the ball back off Georgia Stanway on the edge of the England box, allowing Smith to score the equalizing goal.

“For sure. We are all about high press, that’s one of our biggest strengths. As much as we can do it, we want to, and that’s how we got a goal out of it. We just want to continue doing that and put them under pressure and see what came of it.”

Smith and her team did have to adapt though, having less possession than usual, at just 31.3%, the team’s lowest since 2016.

It meant Smith and Co. up front had more defensive work to do than usual to stop a ball-playing England team filled with momentum off the back of their European Championship success, and Smith believes it will be a valuable test for the team and her personally.

I mean, yeah, we are definitely used to having more of the possession, but we knew this is a great team,” she admitted. “They possess, they’re good on the ball, so we needed to have a lot of energy defensively and make it as hard as possible for them. In terms of my game, I just had to work hard defensively, put a lot of effort in and just do what I could even without the ball.”