U.S. Battles Past Scotland to Ensure Unbeaten 2018 Thanks to Alex Morgan’s Goal 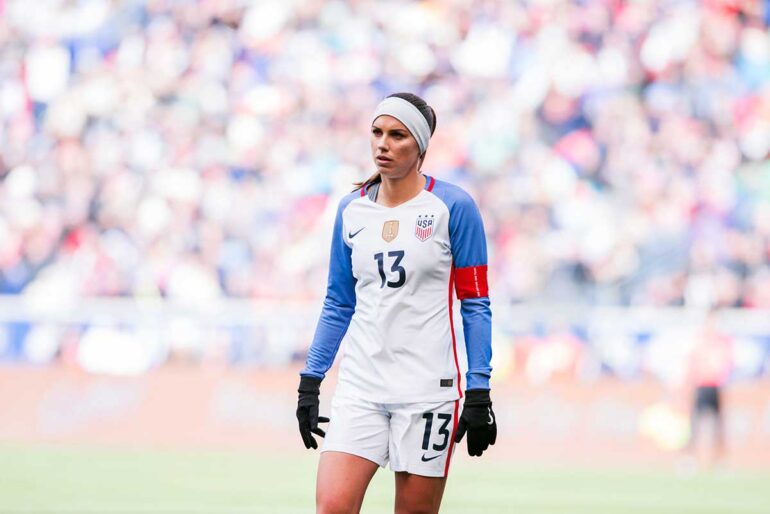 The United States ensured an unbeaten 2018 with a hard-fought 1-0 win in Paisley against Shelley Kerr’s Scotland with Alex Morgan’s first-half volley the difference on a night where the side ranked 19th in the world pushed the world No. 1 all the way.

Morgan got free during a rare lapse in concentration for the hosts five minutes before halftime, volleying a first-time effort past Lee Alexander from Mal Pugh’s cross.

But the world champions didn’t have it all their own way on a night in which Scotland had enough chances to bother Jill Ellis’s side, but the World Cup favorites held tight to ensure an 18-0-2 record for the year.

It was a nervy start for the visitors on their first trip to Scotland since the 2012 Olympics. Caroline Weir’s whipped free kick should have been converted but Claire Emslie couldn’t bundle the ball past Ashlyn Harris.

The U.S. took a while to get into their rhythm but had their first chance from a lightning counterattack. Carli Lloyd and Crystal Dunn were both involved before Morgan pulled the ball back for Pugh who sliced her effort wide.

Morgan had to be alert at the other end to clear Erin Cuthbert’s corner off the line after Harris failed to clear her lines before the Orlando Pride forward scored her 98th international goal and continued her good form for her country with the game winner.

Pugh’s accurate cross from the right combined with Morgan escaping the attention of Chloe Arthur left the red-hot striker with the freedom of the six-yard box to leave Alexander with no chance.

The U.S. asserted their control a little more after the break; Ertz was denied by a good save from halftime substitute Shannon Lynn before Carli Lloyd had the ultimate chance to gift wrap the game from the penalty spot.

Kirsty Smith was adjudged to have felled Pugh inside the box, but replays showed it looked soft and Scotland’s complaints were rewarded when Lloyd stepped up and smashed her effort off the crossbar.

Bar that, it was arguably Scotland who had the biggest chance to change the score when Christie Murray lobbed a lovely ball over the top to fellow substitute Lana Clelland, the Fiorentina striker volleying straight at Harris who pushed it behind.

Caroline Weir’s stoppage-time free kick brought hope but the Man City midfielder fired straight at the wall, allowing the U.S. to close out the match in the corner flag and hold on to see out their unbeaten year.