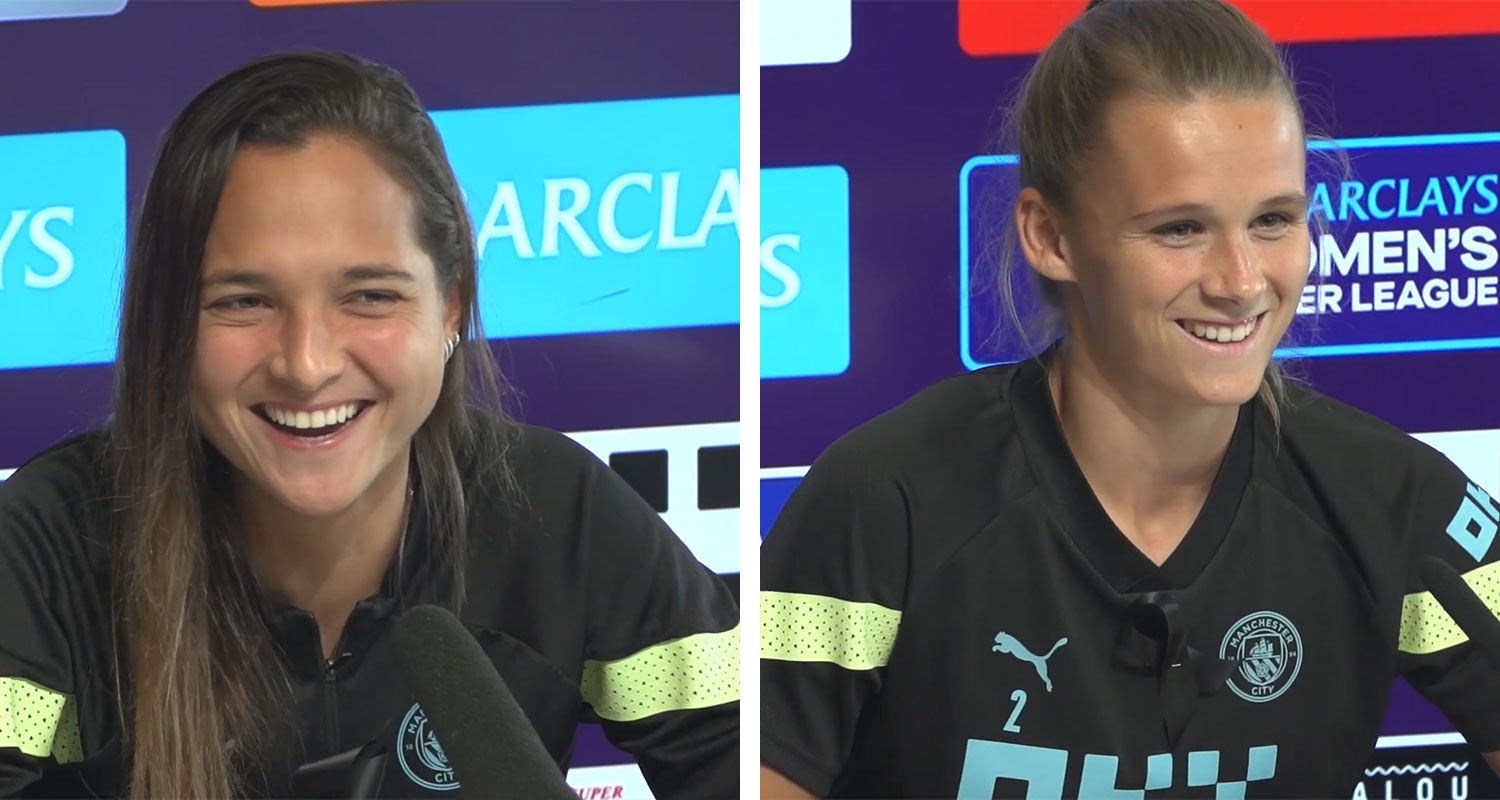 Manchester City has endured their biggest turnover arguably in their eight years of existence since relaunching their women’s team and jumping into the Women’s Super League back in 2014.

Not just in terms of personnel but also in squad nationality and in playing style. While the departures have been largely British stars such as Keira Walsh, Lucy Bronze, Caroline Weir, and Georgia Stanway, plus the retiring trio of Karen Bardsley, Jill Scott, and Ellen White, their replacements have been anything but.

Players have arrived from every corner of the globe: Asia, Europe, South America, and Oceania now make up Gareth Taylor’s playing squad heading into Sunday’s opener against Aston Villa, but the camaraderie has clearly started to build, as was evident when Netherlands international Kerstin Casparij and Venezuela international Deyna Castellanos sat down to meet the media on Friday afternoon.

As Casparij, like most foreign imports, joked about the weather being better than expected since arriving from FC Twente, Castellanos was happy to play along, having arrived from the generally warmer, sunnier climate of Madrid.

“It has not been such a big difference for me coming from the Netherlands,” laughed the full back. “I was always told the weather was not very nice, but we’ve been lucky so far.

“Really?” responded Casparij, before a dry “No” came back from the former Atlético Madrid star.

“It’s been good though,” added the forward. “I have been enjoying the city a lot, I like it so far.”

Despite being similar in age, their career paths to this date have been very different.

Castellanos is an icon back home in Venzuela, has received a whole host of individual awards, as well as playing for — and being linked with — Europe’s top clubs. Casparij, meanwhile, only a year younger, has come through the ranks back home in the Netherlands, winning back-to-back titles with FC Twente. Both have their own individual reasons for coming together at Manchester City.

“Firstly, I was out of my contract, so it was an option for me to move now,” admitted Casparij, now 22. “I was looking round to see what options there were. I was having a good time at Twente, winning the title twice in a row, but when Manchester City came around I had a few conversations with Gaz [Taylor, head coach] and Gavin [Makel, Head of Football] and I felt very confident and very excited about moving here.

“I felt like with the way I want to play and the style of play here, it just clicked, in my heart it felt like a good choice. I felt, ‘Why not?’ I should just do it.”

Castellanos has already had experience at a top European league after her spell with Atlético Madrid, but praised the “competitiveness” of the Barclays Women’s Super League ahead of her potential debut this weekend, and admitted it has helped having former Atlético teammate, Laia Aleixandri, follow her to Manchester.

“There is going to be a challenge every single weekend, in the league and in the cups,” she said. “Trying to get through every weekend with a win for us will be very hard, but it’s something we hope to accomplish, to try and reach our goals.

“I was speaking with Gavin probably one week before Laia and when I found out Laia wanted to come to England, it was nice. We were roommates in Atlético, I was like, ‘Are you coming with me?’ and she was like, ‘What are you talking about?’

“It was great news, Laia has been one of my closest friends in Atlético, so coming with her here was exciting and you feel good to have a person you’ve known for quite a long time, you’ve played with her, and you can call her your friend. It’s very positive coming to a new team already knowing someone.”

Casparij jokes, “I could not have said it any better,” when questioned about the strength of the Women’s Super League, but is looking forward to getting started and continuing her own personal development after experiencing firsthand the Euros fever staying in nearby Worsley with her Netherlands team during the summer’s tournament.

“You could feel it every day, every week, when the Lionesses were playing especially, it was on the rise. I think we have sold 20,000 tickets for the [Manchester] derby and it’s in December. That speaks volumes.”

“Overall, it’s very exciting to play as a full back in this team,” Casparij said about her role in the team. “The style of our play gives me a lot of freedom to be very versatile. Training with Deyna and all the attackers here, it’s very exciting, it makes me work harder and get better. It’s been a blast.

Casparij also admitted she had spoken to a vast array of national team teammates who play or have played in the WSL, and joked with her new teammate about one of her hobbies she’s keen on continuing in England — photography.

“I’ve been around the city a bit. I don’t live in the city just yet, so when I do, I will get more opportunities to take photos. But yeah, I’ve taken a couple on my phone, I can’t wait to whip out my Polaroid.”

“I’ll be your model,” joked Castellanos.

“You’ll be my model? Yeah, definitely, we can do that,” responded Caspariij, laughing.

Castellanos will be part of a new-look City attack for the new season, with Mary Fowler and Yui Hasegawa also joining, adding to the likes of Khadija Shaw, Lauren Hemp, Chloe Kelly, and Julie Blakstad, compensating for the departures of Caroline Weir and Georgia Stanway, as well as the retirement of Ellen White.

Able to play as a number nine or slightly deeper in a creative role, Castellanos is looking forward to seeing how the attack looks once the season gets underway.

“It’s more competitive. Every day, every single person on the team has something to offer and that’s something I was looking forward to here at Manchester City. It can be difficult mixing so many styles and nationalities, but I think the goal and the way City plays is very clear, it will be about trying to show what we can do. We know our strengths and weaknesses.

“For me, right now, I’m more a number nine, that’s the role I have so far. I know I can probably play somewhere else, develop in another position. We’ll see what Gaz wants from me and I’ll try to help the team as much as I can and obviously my own goals personally.”