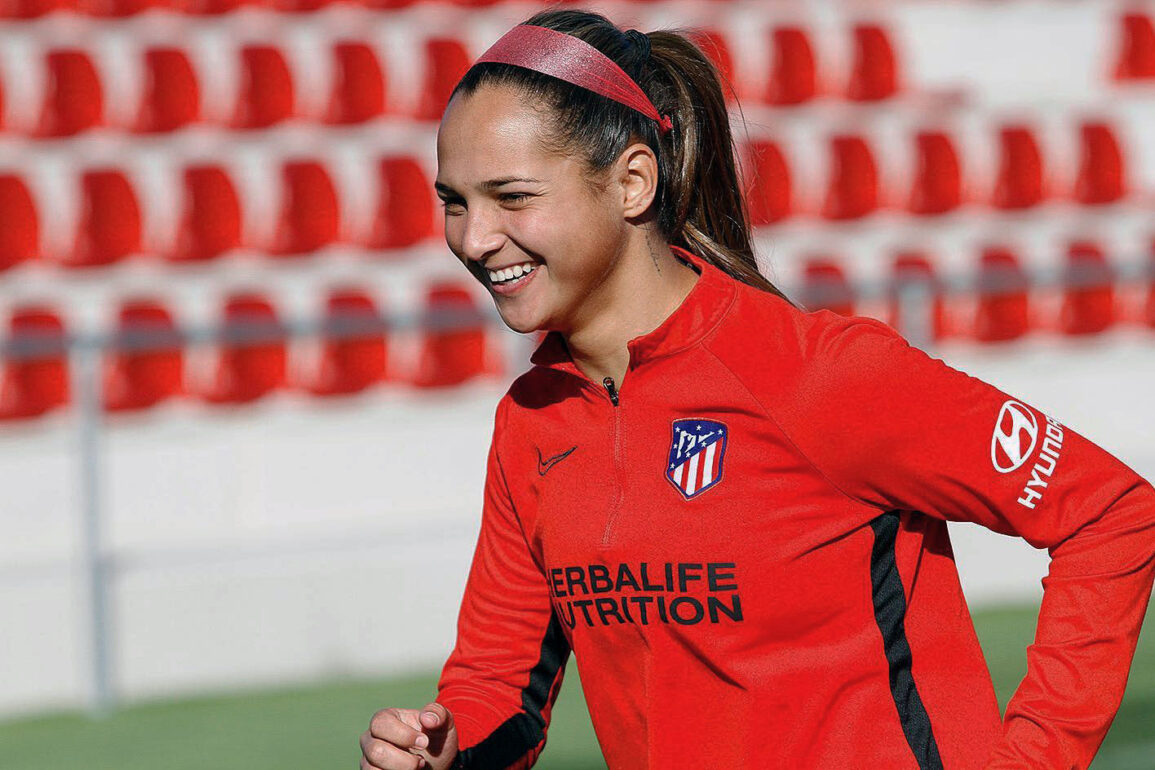 Richard Laverty·
MagazinePrimera DivisionSpain
·August 9, 2020·8 min read
Share
When it came to make a decision, she didn’t go with what would give her the most money, she chose the team that would put her in an uncomfortable situation.Guillermo Zamarripa, agent for Deyna Castellanos

Editor’s note — This article originally appeared in the digital issue of Our Game Magazine.

The past seven years have been a whirlwind, a crazy journey for even the most experienced to deal with, let alone someone who was still a teenager little more than a year ago.

But more than anything, Castellanos’ fledgling career, already filled with memorable moments, awards, and a big January move to Atlético Madrid, has made her an icon back home, a legend, a symbol of hope for a country not used to the limelight.

Why? Castellanos has only now made the step up to professional soccer after spending three years at Florida State University in the United States and has only played youth tournaments with her national team, yet to represent Venezuela in a senior World Cup.

Those who know her best talk of a young girl with ambition, drive, determination, and unflustered by the hype surrounding her.

“She comes from very humble beginnings, a humble family,” said Guillermo Zamarripa, her now agent and an advisor for several years. “She had to take a bus to soccer training, she played because her brother played. Her mum didn’t want Deyna to stay home alone so Deyna went along to watch and by the age of five she started playing.

“Her connection with her mum is very special. Deyna wouldn’t be who she is without her mum’s support. Like everyone else, Deyna was told soccer wasn’t for girls, especially in a country that didn’t really have a structure, it was a man’s sport, but her mum told her if she liked it, she could do it.”

Born in Maracay, roughly 76 miles outside of Caracas, Castellanos was spotted by her brother’s coach and years later would find herself representing her country at the 2014 Copa América at just 15 years of age. She also represented Venezuela at the 2014 Summer Youth Olympic Games, emerging as the competition’s top goal scorer with seven tallies.

A year later she went to the Under-17 FIFA World Cup in Costa Rica, where her six goals saw her finish joint top scorer alongside teammate Gabriela Garcia as Venezuela reached the semifinals.

For a country that needed hope, they had found it in Castellanos, but at just 16 years old, there was a long journey still ahead of her.

Zamarripa, who first met Castellanos after the U-17 World Cup in Costa Rica, says it took a “different mentality” for the teenager to succeed.

“You had this teenage kid fully aware of the impact she’s having on the country but also aware of the long journey ahead of her,” he said. “It’s a country in need of heroes and Deyna fulfilled that gap. The expectations are high but she knows she still has to work.”

Another sparkling couple of years saw her once again lead Venezuela to another U-17 World Cup semifinal at the 2016 U-17 World Cup in Jordan, this time winning the Bronze Ball and Bronze Shoe, and then starting her college career with Florida State under head coach Mark Krikorian.

“When we recruited her, she had a huge following already,” said Krikorian. “Different politicians have tried to get her to speak out and she’s had pressures she’s had to deal with that other college kids here haven’t had to deal with.

“The unrest in her country, the uncertainty of the leadership, the economic downfall Venezuela has been going through, how is a teenage girl supposed to get involved in that? Deyna’s been sensible enough to know what to say in the right situations. When things are tough, you look to someone for hope and she has provided a lot of people with a lot of hope.”

Back home, the Castellanos name and brand was growing day by day. The term “Queen Deyna” was now associated with her and is the URL for her website, while her social media channels were gaining hundreds of new followers every single day.

Carlos Celis, who works as a performance analyst for the Venezuela Football Federation on the women’s side, offers an insight into why Castellanos has continued to grow toward legend status in her home nation despite her relative inexperience.

“Venezuela has never been a well-developed country,” he admitted. “It’s one of the biggest countries in baseball and even though everyone loves soccer here, we have never been one of the top nations.

“Deyna changed all that because when she went to the Under-17 World Cup the first time, she scored in every game and Venezuela got to the semifinals, something which has never happened before, men or women, in any tournament. It brought a lot of attention to female soccer — people sat up and watched.”

Celis added, “People saw her as a role model. She was mature, she was different, and people started to notice that. When we went to the Youth Olympics, it was the first time our team got a medal in an Olympics. She’d had an awesome Olympics, an awesome World Cup, an awesome Copa América, people started to ask if we could play her in the men’s team because she was that good. It was like a snowball effect; every tournament we went to she was top scorer.”

In 2016, Venezuela hosted the South American U-17 Women’s Championship, which they promptly won thanks to Castellanos’s incredible 12 goals, including the only goal in the final against Brazil.

“We broke a continent record for the biggest attendance at a female soccer match,” said Celis. “40,000 people to watch an Under-17 game. Deyna scored against Brazil to win us the trophy, she put the icing on the cake, it couldn’t be better than that.”

But it did get better. Later that year at the U-17 World Cup in Jordan, a split-second decision would  bring Castellanos to the attention of the world and change her career.

Venezuela had lost their opening group game against Germany and in the second against Cameroon, a 93rd-minute equalizer looked to have ended Venezuela’s chances of progressing out of the group state. But as the game kicked off again in the 94th minute, Castellanos hit the ball from the halfway line and into the back of the net, saving her country and earning her worldwide plaudits and several major award nominations, including as a finalist for the 2017 FIFA Puskás Award, an award given to the best goal of the year.

“All hope was lost and then Deyna did that,” recalled Celis. “When you have a girl who can do that — wow, it went viral. She was nothing short of a hero.”

Her legend was such that the government built a monument of Castellanos in the state of Tachira, while Celis says more families are starting to call their newborn daughters Deyna as her iconic status across the nation grows.

Her goal and subsequent performances earned her a nomination in the FIFA Best awards, becoming the youngest nominee in history, alongside 2016 winner Carli Lloyd and eventual winner Lieke Martens.

Though Castellanos was also nominated for the FIFA Puskas award thanks to her spectacular goal, it was her nomination for Player of the Year that caused an uproar, in part due to the U.S. midfielder Megan Rapinoe being particularly outspoken about the decision.

“She was shocked and it created a lot of debate,” said Zamarripa. “She got that, but it wasn’t her fault. The people who nominated her were not her fans though, it’s people who know soccer. Managers, captains, and the media.”

Castellanos became a NCAA National Champion with Florida State in 2018 and closed out her college career with 48 goals and 21 assists in 82 games in 2019, and joined Spanish champions Atlético Madrid at the end of 2019.

“Her best days are still in front of her and it’s great she’s now at Atlético,” said Krikorian. “Her ability to read the play, her sense of where the goal is was different to 99 percent of the players. England had one of the special ones in Kelly Smith back in the day. She’ll have to adjust to the speed and physicality of now playing with women but it’s time for her to be tested in a new environment.”

Rumors suggested she would end up at Club Deportivo Tacón, the club that will become Real Madrid first women’s professional team, but her agent Guillermo Zamarripa says her decision proves what kind of character Castellanos has.

“She chose Atlético because Real couldn’t give her the competitiveness she was looking for,” he said. “That’s Atlético and Barcelona, Real is not Real Madrid just yet. When it came to make a decision, she didn’t go with what would give her the most money, she chose the team that would put her in an uncomfortable situation.”

He also admits conversations were had with FA Women’s Super League side Chelsea and manager Emma Hayes before the club signed Sam Kerr, but that big clubs in the National Women’s Soccer League, France, Italy, and elsewhere all wanted to sign her out of college.

Off the pitch, the Deyna brand is flying. As of this writing, she has 1.4 million Instagram followers and more than 200,000 followers on Twitter. Due to her iconic status, politicians in Venezuela are trying to get her involved in campaigns, while she has become an ambassador for both CONEMBOL and FIFA.

She has also begun a fledgling career in the media and graduated from Florida State with a degree in communications.

Castellanos was an analyst for Telemundo during the 2018 World Cup in Russia and again for last summer’s Women’s World Cup with NBC in France.

Her legend is now such that her agent has to arrange private security for her whenever she returns home to Venezuela.

“She cannot be there without private security, point blank,” he said. “When people know she’s in town, there are crowds. A few months ago, I went back with her to inaugurate some new women’s football facilities and you get into the airport and there are thousands of people just waiting for a picture or an autograph.

“Even right now in Madrid, after the first game there were hundreds of people waiting in the stands, I had the Atlético director on the line asking, ‘Who brings this kind of crowd to a game?’

“Every single day she gets messages from teenagers and kids in Venezuela asking for an autograph, a picture, a video, they idolize her. Deyna sees that as a huge responsibility and she knows it.”

[dropcap]I[/dropcap]f you need proof that Castellanos may be on the verge of replacing Brazilian legend Marta as the new face of women’s soccer, a quick visit to the FIFA World Football Museum in Zurich will confirm it.

“She is considered a legend, no doubt,” said Zamarripa. “Talk to people in Venezuela and people put her in the same category as Juan Arango. It goes beyond Venezuela. If you go to Zurich and you walk into the FIFA museum, there are legends for every country. You have Ronaldinho for Brazil and on the women’s side, Marta, but mainly men’s superstars. For Venezuela, there were no men, it was just Deyna. The face of Venezuelan soccer is this 20-year-old kid!

“It has always been Marta but Deyna is going to be the next generation,” added Celis. “She’s an incredibly important figure in our country, there’s nothing she cannot do.”