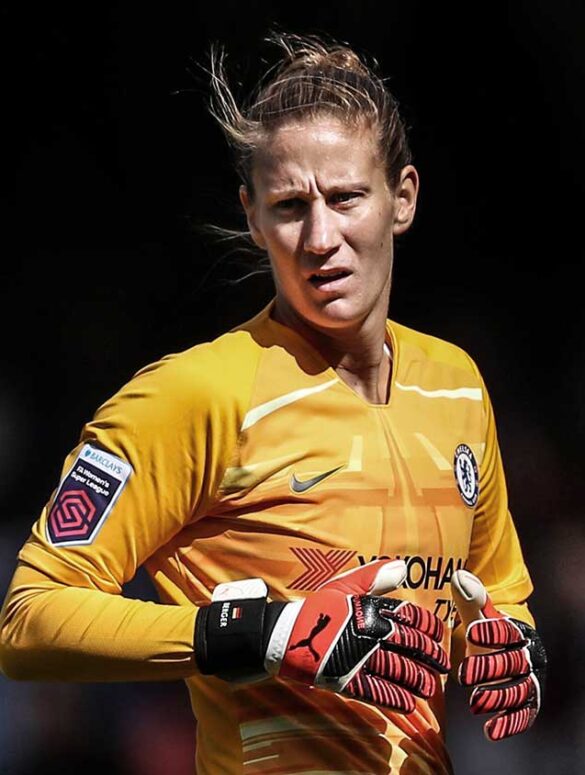 Man City vs. Chelsea Showed, Yet Again, Why Women’s Football Has Nothing to Prove

Richard Laverty·
CommentaryFA Women's Super League
·April 21, 2021·4 min read
Share
Even for the neutral, it wasn’t a match you simply watched, it was a match you felt.

The butterfly effect they call it. Generally, it’s the idea that what looks like a minor, irrelevant event in isolation can turn into something much bigger, something much more important, both good and bad.

You can apply such an effect to almost anything in life, but certainly in sport. Think of the 2019 World Cup semifinal, when England’s Ellen White saw a goal disallowed for the most minor of margins before captain Steph Houghton saw a late penalty saved against the nation who would ultimately go on and win the tournament.

Think back to 2017. Flashes of Paris Saint-Germain’s Katarzyna Kiedrzynek slotting a penalty kick just past the post in the Champions League final still live long in the memory when less than 60 seconds later Lyon was celebrating another European triumph.

On Wednesday night, that moment belonged to Chelsea’s Ann-Katrin Berger. Rarely has a draw ended in two teams looking so split emotionally.

The score line read 2–2, the reality read differently. The Blues celebrated while opponents Manchester City slumped disconsolately to the ground, safe in the knowledge that bar a miracle, their second FA Women’s Super League title was now out of reach.

Less than 10 minutes earlier, Berger had made a stunning save to deny Lauren Hemp what would not just have been the winner in another enthralling encounter between England’s top two sides, but a goal that would have completely flipped those full-time reactions.

Berger’s fingertips didn’t just seal her side a point, they did something much bigger: they likely clinched her side’s fourth FA WSL title. One split-second action, a screenshot in time, but a much bigger, likely longer-lasting effect.

It would be an insult to Berger’s extraordinary talents on the pitch to solely celebrate her individual success and rising stature due to what she has had to suffer through off the pitch in recent years. While no doubt an inspirational story in itself, the Germany international has safely established herself as one of the best in the world through talent and dedication in spite of the adversity thrown at her by life.

While eyes throughout the season have focused largely on Chelsea’s new “Kerrby” connection, Berger is one of the biggest reasons they will have traveled back to London in a celebratory mood, and also a large reason why they still have a shot at a first European title to boot.

The match itself was a 95-minute edge-of-the-seat, hide-behind-the-cushion emotional roller-coaster.

Even for the neutral, it wasn’t a match you simply watched, it was a match you felt. A match you breathed, inhaled — and exhaled in Emma Hayes’ case — a match that summed up the qualities of the nation’s top two.

From Hemp’s memorizing dribbles, Sam Kerr’s insane quality up front, and a rare Fran Kirby howler that almost turned the title race on its head, it had a little bit of everything.

It would as ever be easy to say the match was a great advert for the women’s game, but the reality is at the very top level it is now par for the course — it is expected, no longer a secret.

This was the fourth draw in a row between Man City and Chelsea at the City Academy, the third to finish 2–2. The other? A 3–3 title decider last season, though an impending lockdown nobody could foresee meant we didn’t know it at the time.

This match almost felt like compensation for losing out on the knowledge last season’s thriller effectively sealed Chelsea’s FA Wome’s Super League title, and how history may just have repeated itself.

It is only a week and a half ago since we celebrated the 10th anniversary of the FA Women’s Super League, and while the best games back in 2011 and 2012 may have been viewed as great adverts for the women’s game then, the game was still very much in its infancy to a wider audience. Not now.

The first 2–2 match? Chelsea cruised into a 2–0 lead against an injury-ravaged City side, only to be pegged back by a late stunner from then teenager Georgia Stanway.

The second time around it was City who led, 2–0, before Ji So-yun’s deflected free kick minutes from time sealed another 2–2 draw.

Last season was probably the pick of the bunch: long-range screamers, missed penalties, dazzling end-to-end action that wouldn’t have looked out of place on the Madison Square Garden hardwood.

Like any other sport, it’s a give-and-take situation. For every Manchester City 2–2 Chelsea, there’s a West Ham United 0–0 Aston Villa, which preceded the former by 24 hours.

But the dull affairs don’t demean the whole women’s game and don’t mean it has to prove its quality or its place in the world or, indeed, even in society.

Among the tension, the deep breaths, the screams and shouts, the heads in hands, it was hard not to break into the occasional smile, even astonished laughter, as City and Chelsea seesawed from one end of the pitch to another.

One second Hemp was bursting down the left, moments later Kerr was flying down the middle, but it definitely wasn’t a one-off, it was actually a remarkably and pleasantly familiar sight for those who regularly follow the women’s game, and in particular the FA WSL, which has been producing games of this quality for some time, and now having some of the best in the world on show on the pitch is only emphasizing the progress.

There was not just Kerr, Kirby, and Berger. There was penalty scorer Pernille Harder, U.S. World Cup winning trio Rose Lavelle, Abby Dahlkemper, and Sam Mewis, and an array of other top-class players, as well as two top coaches prowling the touchline. What do any of them have to prove to anyone? Even before Wednesday night, absolutely nothing.