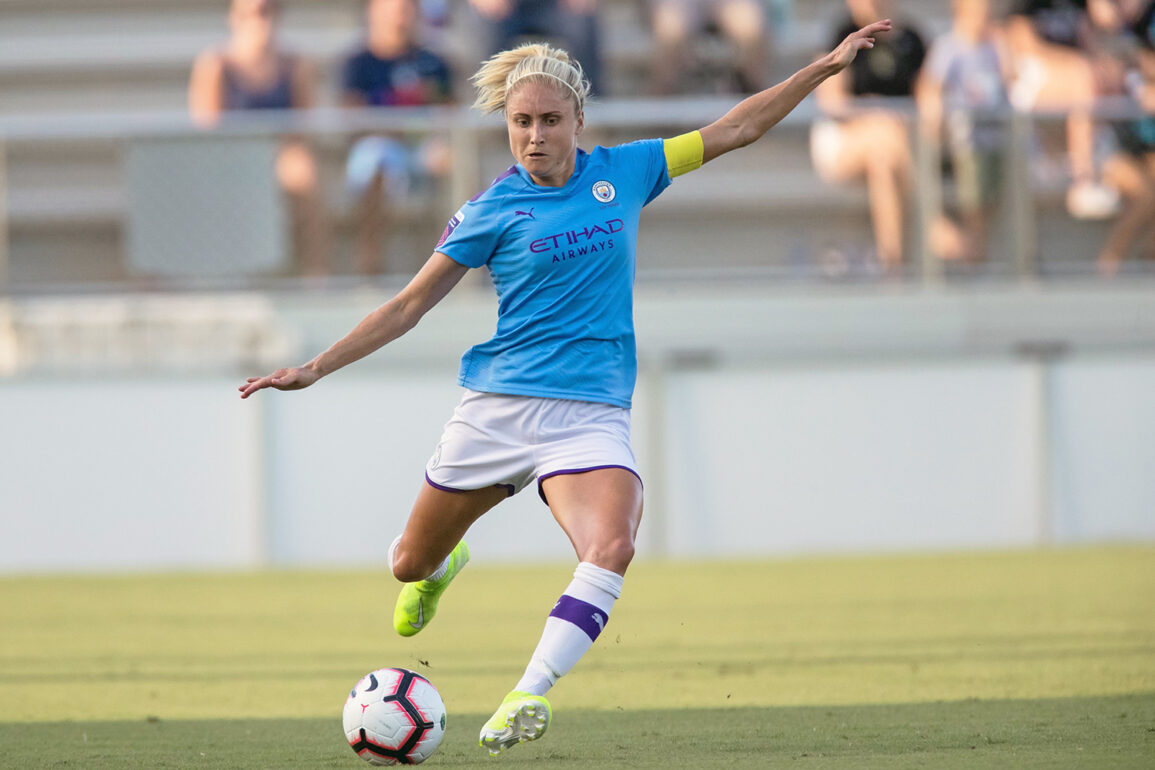 29th October, 2016. The venue is Widnes and its infamous 3G pitch. The occasion is Everton hosting Bristol City in an FA Women’s Super League 2 encounter, with promotion back to the FA WSL 1, as it was known at the time, on the line.

The Toffees had been relegated from the promised land back in 2014 and were struggling to make it back to the big time, despite a squad filled with players more than good enough to finish the job.

A win would almost certainly see them return to the FA WSL 1 ahead of rivals Bristol City, but a dramatic encounter sees Andy Spence’s side miss a 95th minute penalty, sealing promotion for their rivals at their own home on Merseyside.

The Bristol City manager celebrating on the pitch is none other than current Everton boss Willie Kirk. The player who scored two scintillating goals to rob the Toffees of promotion is Claire Emslie, also now of Everton.

Of the squad which ventured to Goodison Park on Saturday, only captain Danielle Turner, plus Gabby George and Megan Finnigan remain, but the changes go way beyond.

That chilly night at Widnes was almost five years ago, and Everton would ironically find their way back to the top division by default when Notts County suddenly folded the night before the 2017 Spring Series got under way.

They have made the very most of their fortune. When Kirk took over late in 2018, Everton were bottom of the newly re-branded FA WSL and staring at another potential relegation in the face.

On Saturday, they walked out to 5,998 fans at the club’s main stadium in the center of Liverpool. While Finnigan, George, and Turner are reminders of a bygone era the club would rather forget, they are now joined by international superstars.

Several of them were in the starting lineup at Goodison Park where fans returned to watch the opening day clash, with Nathalie Björn, Kenza Dali, Anna Anvegård, Toni Duggan, and Aurora Galli all starting.

Everton is now up there with one of the biggest spending clubs anywhere in the world, having spent close to a six-figure fee on France international striker Valérie Gauvin last summer, and even more on 18-year-old Swedish star Hanna Bennison from FC Rosengård last month.

So much do they want to get into the Champions League the club made another financial push to sign an established international last week, but the move didn’t come off.

Even with more financial input at the top level and an increased injection from title sponsors Barclays and TV money now flowing from Sky Sports, Everton is still one of the few putting forward big transfer fees not just for one player but for several.

Surprisingly, the fixture is the most one-sided in FA WSL history, with Manchester City having won all 10 previous encounters between the sides, with an aggregate score of 26–4.

A surprise on the surface, but City wasn’t around during Everton’s glory days of the first three FA WSL seasons, and when they did rock up in 2014, they signed two of the club’s key players in Jill Scott and Toni Duggan.

That statistic is now even more damning as City recorded their 11th straight win in dominant fashion, racing into a 3–0 halftime lead as the hosts failed to offer any resistance to the visitor’s duo on the wings of Olympic gold medalist Janine Beckie and former Toffee Hayley Raso.

This may well be the next chapter in an exciting new era for Everton, and it will still take time for a squad with several new players to challenge the established top sides in the country, but it was one which felt avoidable given Kirk’s side did a better job of competing with the side they want to call their rivals after switching to a back four at halftime.

As it was, Gareth Taylor‘s side had no issues recording an opening-day victory despite missing Ellie Roebuck, Chloe Kelly, Keira Walsh, and Lucy Bronze, while Lauren Hemp was left on the bench.

Kirk went with a back three and Rikke Sevecke as a wide midfielder, a decision City decided to instantly go after, with Steph Houghton and Alex Greenwood consistently picking out Beckie in the endless space down Everton’s right.

The Toffees looked good in attack and could have taken the lead had Karima Taieb, who was impressive in the absence of Roebuck, not denied Anvegård with a good save down low.

After Beckie had again escaped down the left, the winger played a brilliant reverse ball to Caroline Weir whose saved effort found Vicky Losada. the Spaniard promptly scoring the opener and her first FA WSL goal since July 2016.

Beckie had the freedom of Goodison and after Duggan lost out in a midfield duel, the Canadian found it all too easy to breeze past the Everton defense and find the corner from the edge of the box.

It was three minutes later when Raso provided Bunny Shaw with a tap-in on her FA WSL debut, and the opportunity for Kirk to make any meaningful chances to get back in the game went with it.

He did make changes at the break, bringing on Emslie and Bennison for her FA WSL debut, reverting to a back four in a move which did stop the onslaught of attacks down their wings.

The Toffees actually enjoyed the better chances as Benameur continued her impressive form from the Real Madrid Champions League tie on Wednesday, but there was time for a fourth when captain Houghton stepped up to score what has fast become a trademark free kick which left Sandy MacIver with no chance.

Left disappointed with his side’s performance, Kirk focused on his team’s work out of possession which cost them in a 12-minute spell that saw City score three times.

“The way the game started, we looked bright enough, but we never managed to look after the ball well enough in the opposition half. The way we’ve been training and playing, it’s been based around bravery out of possession and we were nowhere near that today, nowhere near nailing it.

“The players were very unhappy at halftime, they did my work for me and allowed me to stay calm. I’m not worried about the response because we’ve got some very big characters who were unhappy after that today.

“The back three didn’t work because the team didn’t function properly in every other area of the pitch. We knew we’d be up against a striker and two wingers, but we felt if we got everything else right we’d be okay and it was a risk worth taking. Our press worked about 50% of the time and that figure is nowhere near high enough if you gamble like we gambled.”

Taylor, on the other hand, was delighted to get a result, admitting he would have been happy with a point pre-match given both the amount of first team players missing and the lack of preseason friendlies his team have had.

“It was a really professional performance,” he said. “We were put under pressure in spells, Everton played some good football but we scored some really good goals. To come to a tough ground like this, the girls were excellent, particularly with the lack of preseason preparation.

“Everyone played their part today, from front to back. Bunny, Hayley and Janine, they’re a constant threat. It was great for Bunny to get her goal, it was a great goal. Real class from Vicky for her goal and Steph showed her quality with a great strike, too.

“It’s three points, that’s all it is. With where we’re at, I did think a point here today would be a good result. Everton are a good team with good players and even at 4–0 they were putting us under pressure, they didn’t give up, so it was pleasing to get a clean sheet.”

It gets no easier for either side, with City now facing a third game in a week against Real Madrid on Wednesday with a spot in the new Champions League group stage at stake, while Everton travels to champions Chelsea next weekend knowing they can’t be as generous at the back as they were at Goodison Park on Saturday.