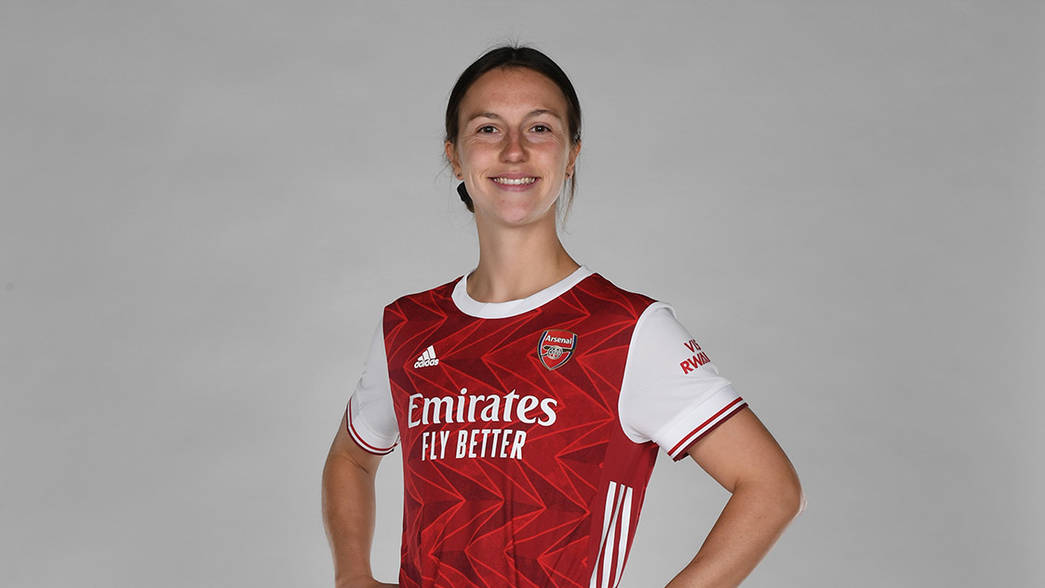 For the past year, Lotte Wubben-Moy has lived out her childhood dreams, the dreams which for many never become reality.

The 22-year-old has put in the hard yards to get to where she is now, and not just the hotel room of a Tokyo hotel where she is speaking confidently to the media ahead of her first major tournament as a senior international player.

Wubben-Moy, born to an English mum and Dutch dad, has done it her way, including three years at the University of North Carolina, one of the best college program in the United States, as well as representing her country at every age group, including as a youth team captain along the way.

In the past 12 months, those sacrifices and the traveling around the world has offered up its award to the young defender in the shape of a return to her childhood club Arsenal last summer and a long-awaited England debut in March earlier this year.

Like many teammates she’d grown up around, Wubben-Moy had endured only training games due to the COVID-19 pandemic, waiting eagerly for that first senior Lionesses cap to come her way.

Less than a year on and she is a full-fledged member of Team GB’s squad for the upcoming Tokyo Olympics, and more than that, she is an Olympian herself after a late rule change meant all nations can now call upon their four reserve players during the tournament.

Under head coach Hege Riise though, Wubben-Moy, along with Niamh Charles, Sandy MacIver, and Ella Toone, have left nothing like spare parts.

“To give context to the beginning of my answer, the way Team GB and the management here wanted it to come across to us as players was we were part of the team anyway,” she explained.

“Credit to the psychologists here and Hege actually because I already felt a part of the team. Take away stepping on the pitch and I still felt very much included and I know all the girls on the reserve list felt the same.”

The 22-year-old is candid and thoughtful throughout her first real media session as a senior member of an international squad, speaking openly about her memories of London 2012 when she had only just begun her teenage years and the team’s unified decision to take the knee before all their games during the competition.

Her self-assuredness, though, is no surprise to someone who first interviewed Lotte back in 2016 when she was a mere 17-year-old about to captain her country to the Under-17 World Cup in Jordan.

“When that news was released it was very welcome of course,” she smiled. “A proud moment for myself and to be involved with girls I’ve come through the age groups with for England is even more special.

The last time Team GB sent a women’s football squad to a games was London 2012, thought at the time to be a one-off to celebrate the English capital hosting the competition.

Thousands upon thousands crammed into stadiums, including Wembley, around the country to see Hope Powell’s side breeze through their group without so much as conceding, only to bow out to Canada in the semifinals.

When roughly 70,000 fans turned up to the national stadium to see Team GB face Brazil — Marta, Rosana, and Cristiane included — one of the faces in the crowd was a 13-year-old Wubben-Moy, three years before she would make her senior Arsenal debut alongside some of the names she was watching before her own eyes.

Steph Houghton, who Wubben-Moy could play alongside when Team GB kick off next week against Chile, scored the winner and her third goal in three games, a memory that is still clear in the defender’s mind.

“I remember going to that Brazil game and vividly remember Steph scoring and Casey Stoney, who was a role model for myself at the time, captaining the side, that was an extremely fond memory for myself.

“Some of the girls were reminiscing about that at dinner the other day and I sort of chipped in as the young one looking up to them, but I definitely feel a close resonance to 2012 and moving forward from that.”

Houghton will be one of three co-captains at the tournament and one of four players who were also part of that 2012 squad. Another co-captain, Scotland’s Kim Little, also represented Team GB nine years ago, as did Jill Scott and Ellen White.

Wales centurion Sophie Ingle is the third co-captain and while a unique and different approach from head coach Riise, Wubben-Moy described the decision to name all three as captains “so cool” when discussing the choices.

“Obviously it’s slightly unorthodox to have three captains, but to me the way the game is going, the progressiveness of us as a team, not just on the pitch but off the pitch, this speaks to us as a whole and unity as a whole we have as a team.

“We have so many leaders in this team. Blimey, I reckon we could have had 10 captains. You can only really look to the spearheads and naturally that is Steph, Sophie, and Kim. To have Kim here as one of my Team GB captains feels like I’m at home anyway, so it’s extremely special and I’m extremely proud of those girls and I know they will lead us out in true fashion when the time comes.”

That unity also stretches to the team’s decision to take the knee before their games, starting against Chile on Wednesday, before further group matches against hosts Japan and Canada, coached by former assistant head coach Bev Priestman.

Players in the FA Women’s Super League and FA Women’s Championship took the knee before every domestic game last season, and it appears there was little doubt Team GB would buck the trend.

“We’ve been having these conversations for a while now,” said Wubben-Moy. “When you look at the issues our whole nation is facing, the whole world is facing, it’s an issue you can’t really put aside, you can’t really decide when to talk about it and when to stop talking about it.

“When we looked at the breakdown of rule 50 and what that looked like for us, we were super sure we didn’t want to create havoc, we didn’t want to ruffle feathers, but we wanted to make a statement and we wanted it to be powerful. We are in an amazing position here as the first game, the first competition of the Olympics, that we can make a statement and that was in our minds when we took this decision to take the knee.”

The racist abuse aimed at Marcus Rashford, Jadon Sancho, and Bukayo Saka since England’s defeat in the men’s Euro 2020 final last week has only further emphasized the issue at hand, but Wubben-Moy says she and the team are proud of how the team showed their best side on and off the pitch.

“That hits hard for any English person, not just what they’ve done on the pitch, but off the pitch. I think they’ve led the way for us, not just as football players but as humans as well.

“They put on a great show for us on the pitch, they got really far and it’s a shame they weren’t able to go on and win the final, but hats off to them for standing strong, I’m in awe of them all really.”

Now though it’s Team GB’s turn to be in the spotlight. The squad heads to Sapporo where they will face Chile on Wednesday,  Japan the following Saturday, and Canada the following Tuesday hoping to go one step further than their male counterparts and bring back 22 gold medals to the UK next month.