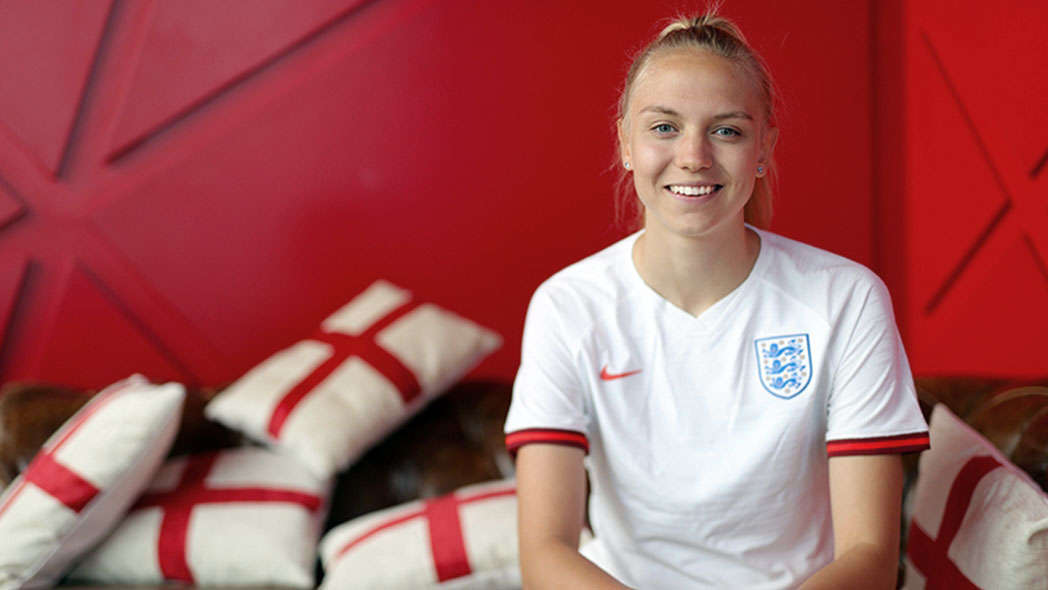 As the England media officer makes the point that Esme Morgan is about to partake in her first press conference, it’s usually a sign for the assembled media to expect a quiet, polite footballer who may well not give the greatest answers, understandably nervous about the pack of faces sat staring back at them.

But the 21-year-old is anything but. Across an engaging 18 minutes, the Manchester City defender is funny, intelligent, funny, reflective, funny, thoughtful and… did I mention funny?

As she accidentally knocks the microphone in front of her, she quips, “I’ll have to get used to this,” but her humor is more than just effect, it’s a reflection of where Morgan is at in her life and career right now having fought back from an injury that kept her out for almost a year and scuppered her hopes of being part of the Lionesses squad at Euro 2022.

Now back fit and back in the squad and hoping to earn her first senior cap, Morgan is understandably on top of the world as she recalls how she found out she would be part of the squad ahead of Friday’s match with world champions United States and next week’s clash with Czech Republic in Brighton.

“It was a real surprise!” she admitted. “I was just driving to go for dinner with Lauren at my uncle’s and Sarina Wiegman pops up on my phone! I just looked at her and said, ‘I can’t take this now, I might crash the car or something!’

“It was funny because I was parked in front of the drive and my uncle tried to pull in and was flashing me because I was blocking the drive; obviously I was on the phone to Sarina! I was trying to wave to him and I told him, ‘That was Sarina, I’m in the squad!’ It was amazing, I just didn’t expect it at all, so soon, but I feel I worked so hard over the last year, it feels like a reward for all the times I was at such a low point.

“It was no secret I started my rehab with the intention of going to the Euros, which in hindsight was ridiculous, that was never going to happen. But I’ve been so happy to be able to come into it and what a camp to be a part of with the game coming up at Wembley.”

For a moment, Morgan puts the cheerful, carefree persona to one side as she reflects on the injury hell that ended her Euros hope as well as her 2020–2021 campaign before it had even begun.

A born and bred Manchester City fan, as a teenager she fulfilled her dream of playing in the light blue shirt when she made her debut in 2017, and she’s progressively grown as a player ever since, via a loan spell at Everton.

Just as she had been called into camp for the first time a year ago, Morgan suffered a serious leg fracture in the Barclays Women’s Super League against Tottenham Hotspur, and in one moment everything came crashing down.

“When I was sat on the pitch having my leg braced up, I said to Lauren, ‘What about the camp?’ Because I’d just had the call-up and she was like, ‘You’ll be fine, you’ll be going!’

“I always had that in my mind, telling everyone I’d be back for the Euros, but that actually caused a lot of stress throughout my rehab because when it got closer to March and I was still walking in pain, I felt such a failure. I’d been telling everyone that I was going to make the Euros, and that was really stressful and such a low point. When I’d got over that bridge and accepted I wasn’t going to go and stopped putting pressure on myself, I could then just enjoy the Euros as a fan and watch the journey of the girls and it was such a joy seeing them and being able to work with Sky and talk about them and genuinely believe myself when I said it was coming home, because I knew how talented and together they were.

“The highlight for me was the game against Norway because I was sat with all the families and with every goal that went in people’s jaws just got closer and closer to the ground. It was just insane. I’ve got so many happy memories of watching the summer as a fan and now for me wanting to be part of something similar next summer.”

Morgan returns to her sense of humor when admitting Wiegman was one of the people she promised she’d be back by March, joking “she probably thought,’god, this girl has been lazy in her rehab,'” but also admitted she knew it would be good news when the head coach called her up because “I couldn’t think of any other reason she’d want to speak to me!”

On her return from injury and her call-up this month, Morgan added: “She said she’d called me in last year and she was waiting for me to be fit again. She said she’d watched my friendlies, the game against Real Madrid and Aston Villa and she’d been really pleased with me and just wants me to come in and be confident and prove myself that I’m worthy of the opportunity of being in the squad.”

There’s no guarantee under a coach who leaves little room for sentiment that Morgan will get her dream debut against the world’s number one team in front of a packed out Wembley on Friday, or even in the venue she sat with the families of her now teammates next week against Czech Republic.

But if she does, she says it would feel “ridiculous” given the journey she has been on both physically and mentally over the past 12 months.

“I’d probably be smiling from ear to ear the whole time. I do have some issues with that. In my first friendly back I was smiling for about five minutes, I hoped they didn’t ping the ball my way too early! But it was a quiet period early in the game so I eased into it and I got a few stern looks from Gaz [Taylor] which settled me down! I feel so proud and all the effort I put in last year will be worth it.”

Her uncle will be in the crowd at Wembley on Friday, as will her mum, dad, and brother, whether Morgan makes it onto the pitch or not, her family will be there to support both her and her teammates.

Asked about any potential nerves ahead of the games, Morgan said it’s easy to block that out when she has both friends and teammates alongside her on the pitch.

“I’m a bit weird, I never really got nervous at football,” she laughed. “I used to do athletics and it used to make me sick with nerves — it was awful. But I look left and right and I have so many girls who are friends on and off the pitch and I never really feel uncomfortable going into matches.

“I’m always someone who feels I can raise my game, I feel I play better in the big games, that’s probably something I need to work on in the not so big games!”

While sentiment may be in short supply, Morgan’s belief in a potential debut should and could come from the fact Wiegman has proven she will offer opportunities to her younger players if she requires them.

After several of them starred off the bench during the Euros, Morgan admits seeing the success of the likes of Alessia Russo, Ella Toone, and Chloe Kelly was a huge motivating factor for her to get back in the squad as soon as she could.

“Seeing the chances given to the young players at the Euros was a big driver for me to get back because she trusts the young players, she gives them chances. Bringing Ella and Alessia on in a major final after an hour in front of 90,000 people shows a lot of trust, but for the players also that fearlessness to come into the game and make their mark, it’s inspiring to think I can do that. There’s so much talent, the training and intensity is amazing, but it’s such a big driver for me.”

She’s also pretty aware of what she will be coming up against, having been a teammate of Rose Lavelle at Manchester City, as well as Sam Mewis and Abby Dahlkemper , both of whom aren’t in the U.S. squad for the match.

Morgan was breaking into the first team as a youngster when Carli Lloyd had a brief spell in Manchester in 2017, and Morgan recalled how it was Lloyd who gave her one of her first memories of what made the U.S. team so special and feared as the nation to have won the last two World Cups.

“It was probably the 2015 World Cup,” she said, when asked about her first memories of the U.S. side. “The first icon I became aware of was Carli Lloyd with her halfway-line goal.

“I loved playing with the Americans at City. They were so, so driven, so professional, so diligent in all aspects of the game. Their nutrition, their recovery, they were relentless and I learned a lot from them. They have that steely determination of no matter what they’re going to win, but I think this England team is starting to adopt that now. You saw it in the Euros, if ever they went down they were ready for the fightback. They were relentless.”