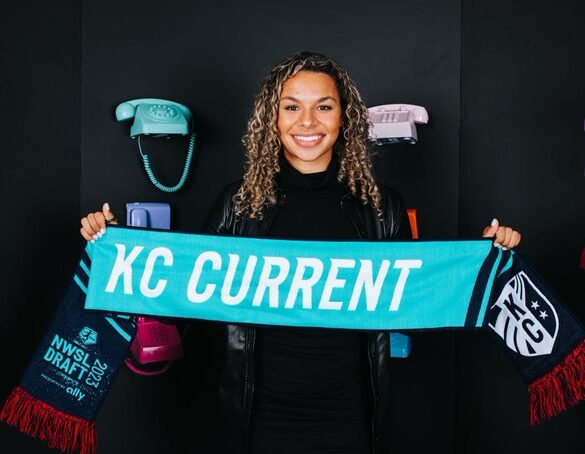 Ahead of the NWSL College Draft, Michelle Cooper Discusses the Opportunities Coming Her Way On and Off the Field

Michelle Cooper is one of the rising stars of U.S. Soccer. A star-studded spell at Duke University culminated in an array of individual awards for the striker, including the illustrious MAC Hermann Trophy, previously won by the likes of Catarina Macario, Crystal Dunn, Christine Sinclair, Christen Press, and many others.

On the international scene, Cooper represented her nation at the Under-20 World Cup, and at the U-20 CONCACAF Championships; her eight goals saw her win both the Golden Boot and Golden Ball as her reputation continued to increase throughout the year.

All that led to Thursday night’s NWSL Draft ahead of the 2023 domestic season, with Cooper all set to be the overall second pick behind 17-year-old Alyssa Thompson, her U.S. youth teammate who skipped college completely to become the youngest draftee in the league’s history with Angel City FC.

“I’m excited,” Cooper said to Our Game Magazine hours before the draft. “Of course, I’m nervous, it’s a big deal, my life is basically about to do a 180 right now, but I’m okay with it and I’m going what happens by the reins. So yeah, I’m excited.”

Cooper was speaking from the draft host city of Philadelphia, where she was with her mum, sister, agent, and she also admitted several of her Duke coaches would be arriving later in the evening in anticipation of Cooper being the second pick of the draft.

The youngster has been talked about so much in recent weeks and months given she is one of the top prospects in the U.S., and despite having some kind of certainty and safety in the knowledge she would be picked compared to dozens of other hopefuls who won’t be, she still admitted the feeling was “surreal” with just hours until the draft.

“It is, it is. That’s what I’ve been saying to my mom and my sister the past week. I didn’t even realize it was a week to the draft a week ago. It’s crazy to think that. I was just a young girl having a dream and now this is actually possible, it’s awesome.

“I said, ‘Wow, this is so surreal, we’re traveling in a couple of days,’ and I can’t believe my life is going to change from this day on.”

With the draft now done and dusted, there was one last twist in store for Cooper, who did indeed go as the second pick in the opening round, but not to the location potentially expected.

Initially, NJ/NY Gotham FC held the overall number two pick, but moments before using it, the club traded it to the Kansas City Current in exchange for U.S. veteran Lynn Williams.

In reality, Kansas may be the place to be right now. The Current had a strong campaign in 2022, reaching the NWSL Championship final. The franchise has invested in elite facilities and Cooper is walking into a new-look attack that includes Brazilian Debinha, Swedish international Mimmi Larsson, and fellow draftee Alexa Spaanstra.

“Anything could change at any moment. I’ve had a lot of good conversations and made a lot of good connections, getting to know coaches and people who play at other clubs, but yeah, anything can change so I’m keeping an open mind and getting excited for what happens.”

Now heading off to one of the most promising and developing clubs in the NWSL, Cooper will have both the facilities and personnel around her to thrive and fulfill the talent those within the U.S. know she holds.

Such is her talent there were rumors that while she would turn professional this year, it could be with a move to Europe, though the striker admitted after some consideration she decided to stay in the U.S.

“I was keeping an open mind at first, but I am really close to my family and being so far from them as of right now was something I realized I did not want, so ultimately I ended up entering the draft.”

And it’s not just a big 24 hours for her on the field either, but off it too, where she has signed a deal with New Balance, one of the world’s major sport brands ahead of her first steps into professional soccer.

It’s a sign of where the women’s game is at all around the world now that young players coming straight out of college are being looked at by major brands around the world, and Cooper is grateful for the opportunities given to her and agrees when I ask about whether or not the game is going to continue to grow in the U.S. and elsewhere.

“I think with the market for women’s soccer growing all the time it’s so exciting to have more people tune in, to buy into the women’s game, and knowing we have so many young players who are capable of being a part of history, of winning trophies, like we have in the past couple of years, it’s super exciting.”

So, how has she kept her feet on the ground? With major deals both on and off the field in the space of 24 hours, individual honors throughout the year, clubs all around the world fighting for her rights, surely it’s tough for any young player to deal with?

“I make sure to always stay humble and talk to my family about things and not get caught up and read posts and read comments — that’s never a good thing.

“I just spend a lot of time with my family, chatting about normal things going on in my life outside awards, recognition et cetera.”

And what of the post-draft celebrations?

“I guess you could say celebration! Definitely going to dinner with my close-knit support system that’s going to be here.”