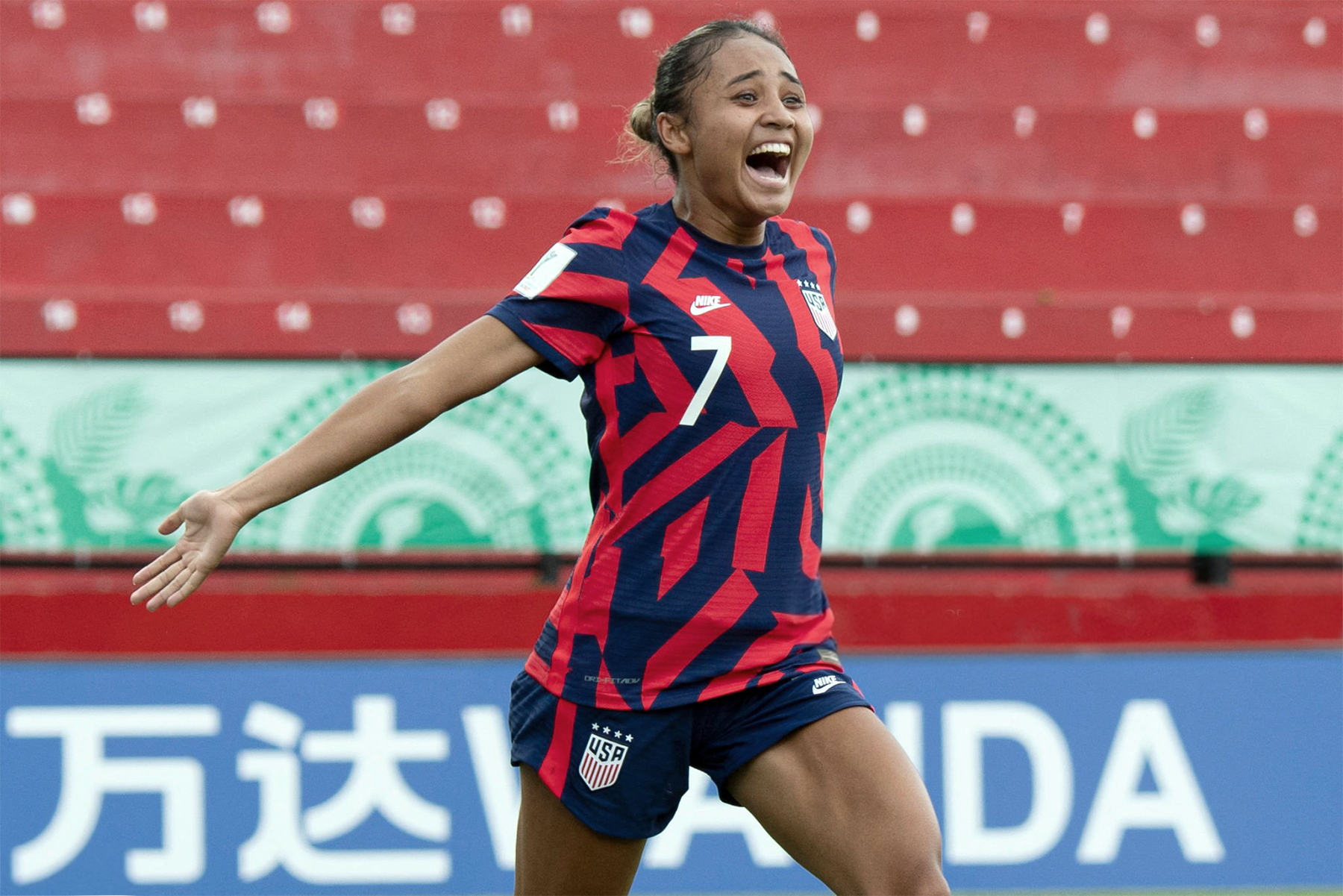 Alyssa Thompson celebrates during the U-20 World cup. (Ezequiel Becerra/AFP via Getty Images)

Seventeen-year-old Alyssa Thompson described making her senior U.S. debut at Wembley Stadium on Friday night as “super cool,” as she became one of the youngest women to represent the current double world champions.

A member of one of Total Futbol Academy boys’ teams where she plays with players looking to make the grade into Major League Soccer, Thompson was a first-time pick by head coach Vlatko Andonovski, and he had no issue throwing Thompson on for the final 10 minutes in front of more than 76,000 fans at Wembley, the biggest crowd the U.S. has played in front of in a friendly match, only beaten by the 1999 World Cup final.

“I was very nervous, but I knew my capabilities and what I could do so and the coaching staff and everyone believed in me, so I was prepared to go on, but I was still super nervous,” said Thompson in the mixed zone after the match.

Speaking about what the feeling was like when Andonovski told her she would be coming on, as she did alongside Ashley Sanchez and Becky Sauerbrunn, the forward added: “Well, first of all, I was like, ‘Gosh, okay.’ And then I was like, ‘Okay, just don’t get in your head too much and you can do it. Just remember what we’ve been talking about in practice.’ I know my team has my back, so I was just ready to go in.”

It was somewhat apt that Thompson was subbed in for 37-year-old Megan Rapinoe, who jibed after the game she was old enough to be Thompson’s real-life mom, and the 17-year-old was clearly touched to have replaced someone seen as one of the top players in the world over a period of time, and someone she looks up to.

“It’s honestly amazing,” she smiled. “I just think she’s an amazing player and person. She’s one of the people that has welcomed me on the team and has made sure that I’m feeling okay about everything, so I couldn’t have thought of a better sub, I guess. It’s been amazing and it’s just an honor to be able to sub in for her.

“During practice, I kind of learned a lot from Megan Rapinoe. In practice, we were switching off, so I was just learning a lot from what she was doing and the press that they had and just getting in the attack and one-v-one situations.

Thompson, like all of her teammates, has lived and breathed the fallout and reaction to Sally Yates’ report that came out this week outlining the depth of abuse within the National Women’s Soccer League.

More experienced players within the squad have spoken out this week, and Thompson admitted it was “cool” to see the solidarity with England before the match, adding “we’re all obviously fighting for a cause for the players.”

But the stories off the pitch didn’t detract from what was a special and historic night for the teenager. While she hasn’t had a text from her sister just yet, she did have family in the crowd at Wembley itself.

“My dad was here and my uncle, so it was really exciting to see them after the game. I was like looking for him and stuff. He was super excited so made me a little more excited.”

Was he tearing up a little bit?

Thompson had previously stated her goal was to get a call-up to the senior squad as her reputation continued to grow at the youth level, but she admitted she was surprised it arrived this soon, against the European champions, in front of a bumper crowd at the national stadium.

“Definitely not. I did not know it would come this soon. I was honestly shocked that I got the call-up. This is a once in a lifetime opportunity and I was so excited and speechless that I got this opportunity.”