Naomi Girma on the USWNT’s Loss against England at Wembley 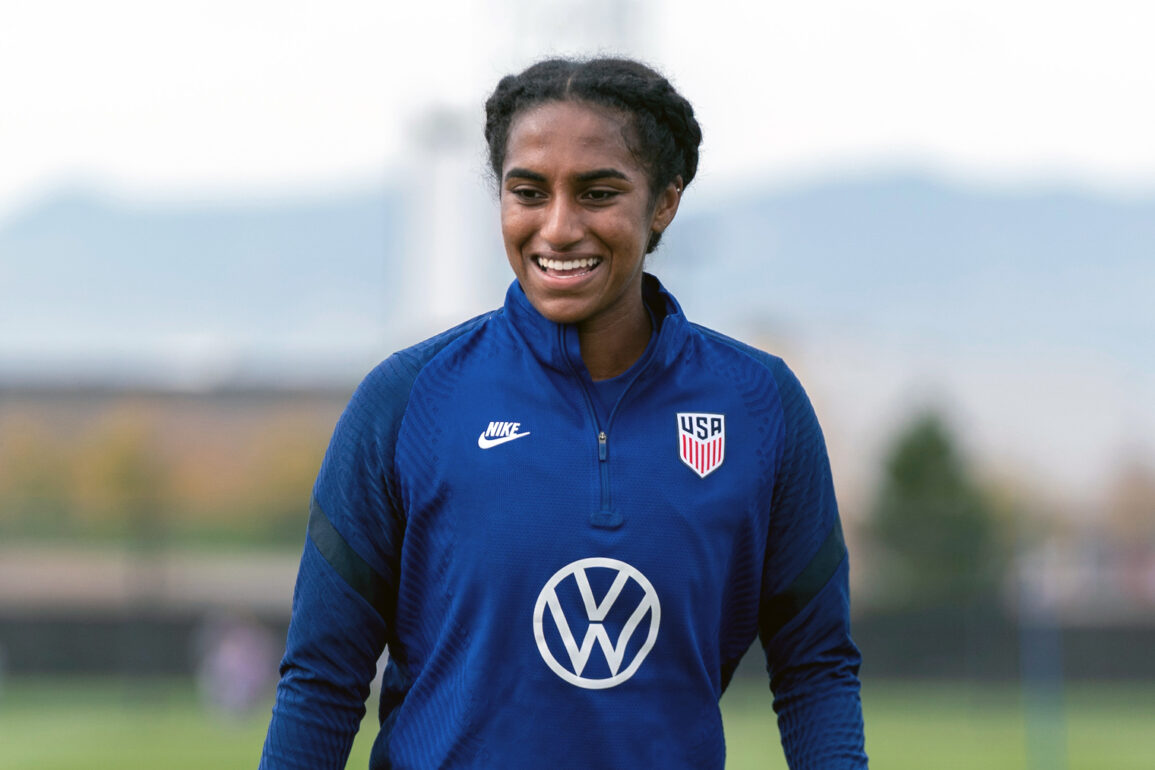 Naomi Girma training with the U-20 USWNT.

Naomi Girma believes Friday night’s defeat to England was a great test for her and her U.S. teammates in an enthralling match that saw the European and world champions go toe to toe in front of 76,893 at Wembley Stadium.

After Lauren Hemp put the Lionesses ahead early on, Sophia Smith equalized but ultimately Georgia Stanway’s penalty after a VAR check decided things, with all the goals coming during a fast and frenetic first 45 minutes.

Twenty-two-year-old Girma was one of the standout performers on the night for Vlatko Andonovski’s side and continued her good form after a promising first National Women’s Soccer League season with the San Diego Wave FC, and the center back enjoyed the test of going against England.

“I think there are always areas I think we feel like we can improve in, especially after a loss,” she said, post-match. “I think we feel like as a team this is a game we can win, so it’s great preparation for the World Cup and it’s something we want to feel and we want to go through the test and the battle. There is stuff we can clean up, all the way through the team, including at the back.”

There’s a common belief the U.S. is in somewhat of a transition at the moment, with young players such as Girma becoming more prominent in the long-term absence of players such as Julie Ertz and Sam Mewis, while Andonovski was also without the likes of Alex Morgan and Catarina Macario through injury, and Crystal Dunn only just returned from giving birth.

But on the night it was those young players, Girma along with forwards Sophia Smith and Trinity Rodman in particular, who looked the likeliest to spark a win for the U.S., and Girma praised various elements of the team’s performance despite a first defeat in 21 games, but also spoke about what they need to build on.

“I think just patience is a big one for us,” she said. “Knowing when to transition and knowing when to keep the ball. I think overall the mentality, the response when we went down was huge.

“The offside moment was disappointing but this team continuing to respond is big for us and that’s something we want to continue to the World Cup.”

Girma was part of a young center back partnership with Alana Cook, while another youngster in Emily Fox started at left back, but soon had to be replaced by Hailie Mace after picking up a knock.

With Andi Sullivan in front of them as the lone defensive midfielder against an all-action Lionesses midfield, Girma spoke about the challenges of trying to keep the Lionesses attack at bay.

“It was about having her [Sullivan] shift to the strong side and kind of communicating where the forwards are dropping off. If we can step in then making sure we’re stepping in with the forwards, that’s kind of what we were trying to do.”

The match came off the back of a tough week for the players amid the revelations of Sally Yates’ report into the long-standing culture of sexual abuse in the NWSL.

Many U.S. players have spoken passionately this week about the profound effect the report has had on everyone involved, and Girma added her voice post-match, pointing out the support younger players such as herself have had from the more experienced members of the squad.

“It’s been a hard week for NWSL, US Soccer, everyone. As a younger player you want to feel safe and protected and you want to continue the legacy the older players have kind of left.