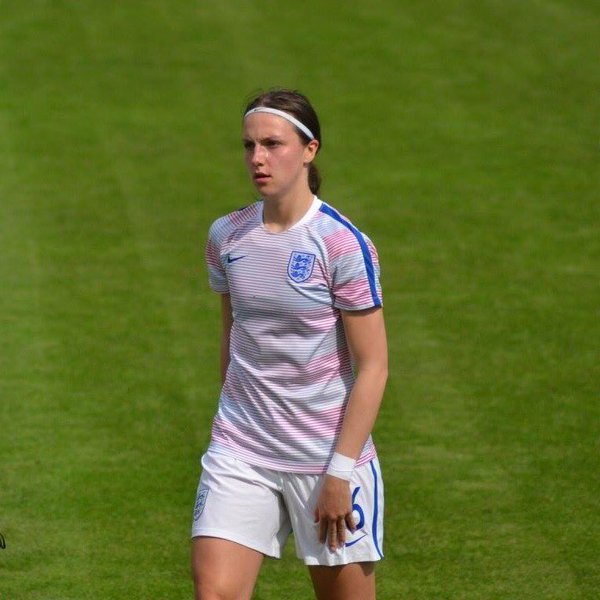 “Football improves your character; I wouldn’t be the person I am without football. I’m the captain here and the leadership qualities I’ve picked up have taught me a lot away from the game.”

She doesn’t turn 18 until January, but Arsenal’s Lotte Wubben-Moy is already living the dream. Next week, the teenager will captain her fellow countrymates out in Jordan when the U-17 Women’s World Cup kicks off.

England’s latest bunch of talented youngsters will face Brazil, Nigeria, and North Korea in the group stage with the hope of progressing as far into the tournament as possible.

It’s the first time the team has ever qualified for the tournament and Wubben-Moy accepts England won’t be looked at as one of the favorites.

“I think we’re a bit of a wild card because we’re not regulars at this level but teams won’t know what to expect from us,” said the center back.

She added: “I think we’ve got a shot and we can upset the party out there.”

Despite it being their first qualification, England were invited to take part in the tournament back in 2008 when players like Rachel Daly, Jordan Nobbs, Izzy Christiansen, and Danielle Carter were part of the squad.

With the pathway into the women’s game now very different, Wubben-Moy credits the FA for how they’ve pushed the sport over the past few years.

“I’d never have thought I would go to a World Cup so soon, there was always the feeling the boys would be able to do it but we never would,” she said.

“We have to credit the FA and the FA WSL for giving us that opportunity, I’ve come through at Arsenal and what we have now is amazing. The training we get as youngsters means we’ll be fighting for top spot in tournaments for years to come, I think we’re right on the cusp.”

Despite their first participation since 2008, there’s no reason this squad can’t emulate the Class of ’08s semifinal effort.

Star attacker Georgia Stanway is already flourishing in Manchester City’s side at 17 while striker Alessia Russo made her Chelsea debut earlier this season.

Wubben-Moy herself has already played for Arsenal’s first team and praised the quality of the squad flying out to Jordan.

“The competitiveness in our squad is amazing,” she said.

“We’ve got players right at the top of FA WSL 1 down to the FA Women’s Premier League and we push each other all the time. Whatever one does, someone else always does better and that’s our motto.”

The defender is also hoping the experience of going away with her friends and teammates will have a long-term effect on her as a person as well as just a footballer.

“Football improves your character; I wouldn’t be the person I am without football. I’m the captain here and the leadership qualities I’ve picked up have taught me a lot away from the game.”

“I love football, I can’t really say much else. I want to get my hands on that trophy, that’s my only aim right now.”