England Stumbles in Final Game of 2018; Sweden Walks Away with a 2-0 Win 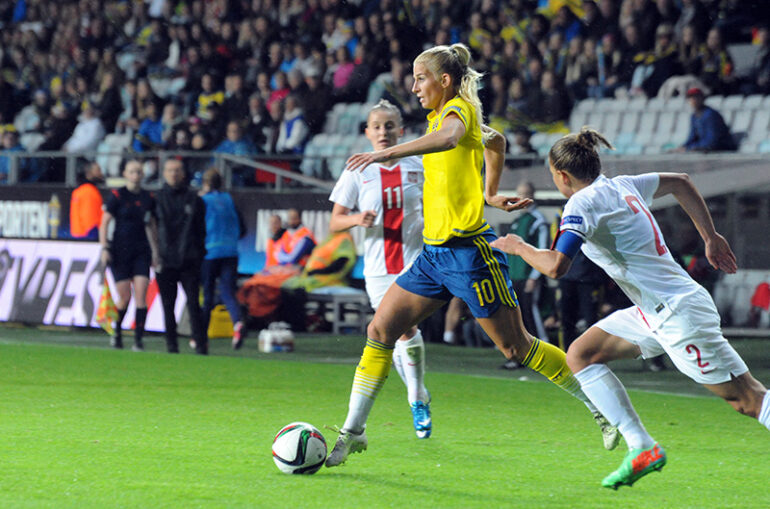 Four years ago, England trudged off the pitch after a 3-0 loss at home to Germany in front of a 45,000-strong crowd at Wembley, leaving Mark Sampson’s plans for the 2015 World Cup in tatters after a largely positive first 12 months in charge.

The parallels to Phil Neville’s current situation don’t end in a home defeat to close out the two head coach’s first years in charge. Neville, like Sampson, started his time in charge in La Manga and both experienced some hefty victories, frustrating matches, and after Neville’s side fell in a 2-0 defeat against Sweden on Sunday, both ended the year with two defeats.

History would suggest there’s no panic needed despite a tepid, frustrating performance where yet again England failed to create meaningful chances, but in the World Cup following the 3-0 loss to Germany, England ended it by beating their rivals for the first time to win a bronze medal in Canada.

Nine months on from kicking off his tenure in Ohio with a resounding 4-1 win against France, the aptly named New York stadium in Rotherham was the host for the final Lionesses match of the year before the next camp in January.

The cold, wind, and drizzle brought back memories of the last meeting between the two teams in La Manga at the start of 2017 when a 0-0 draw did nothing for either side leading up to the European Championships.

Neville, as predicated, made 11 changes to the team which faced Austria in Vienna on Thursday, supposedly reverting to the so-called strongest 11 but the two performances in isolation wouldn’t have suggested it, though opposition strength should be taken into account.

After a prematch ceremony which saw Steph Houghton honored on the day she received her 100th cap; the center back was joined on the pitch by dad Len, mum Amanda, nan Doreen, brother Stuart, and husband Stephen, a hug and a kiss for each of them on an emotional day for the captain.

A minute’s silence on Remembrance Sunday followed and Sweden almost had the lead as soon as the referee started the game.

Perhaps in retrospect it was a sign of things to come when former teammate Kosovare Asllani turned Houghton inside of 18 seconds and flashed a low effort wide of Carly Telford’s far post.

England just never got going and post-match Neville criticized a “slow start” and said England did everything at a pace not of the required standard.

“The best team won,” accepted Neville. “Straight from kickoff we didn’t start the game well. We were slow in everything we did, from taking goal kicks, free kicks, throw-ins. Everything seemed to take an age and we’d spoke about playing with real speed but we never got any rhythm in the play because we never allowed ourselves to.”

It got worse before it got better as a front three of Nikita Parris, Rachel Daly, and Beth Mead failed to penetrate a solid back three put out by Sweden head coach Peter Gerhardsson.

Nobbs, placed in a higher role as Neville praised her for being in the “form of her life”, had to ironically drop deep to find the ball and often found herself surrounded by three or four Sweden players at a time.

Izzy Christiansen and Jill Scott were deployed in the deeper roles, the former playing several incisive passes from deep but Scott struggled and was often a yard behind Sweden’s midfield.

Lucy Bronze didn’t get forward as much as people are used to, especially in the first half and there was even a moment in the second half where Nobbs had to usher her forward when the midfielder received the ball.

The majority of England’s play in the first half went down the left with Mead and Alex Greenwood, but Mead was hooked at halftime after a below-par performance, though she was far from alone.

Sweden were ahead after 20 minutes and it was a goal Telford could do little about when former Chelsea forward Sofia Jakobsson cut in from the right and looped an effort into the net to put Sweden up, 1-0, though Neville will have been less than impressed with the ease Jakobsson managed to get herself in position to shoot.

England was reduced to half chances and Hedvig Lindahl’s only major save of note came when she pushed away a first-time curling effort from Nobbs, before Mead misjudged a header from her Arsenal teammate’s cross later.

After just more than half an hour it was 2-0 when Anna Anvegård prodded home from a corner which England, just like against Australia last month, failed to clear, leaving Neville frustrated.

“We shouldn’t have caught out, we work hard enough at it,” he said. “The players take responsibility for the positions they’re in but it’s not something I’m overly worried about. I don’t like conceding goals full stop, I’m decided in both [goals] just as equally and it’s something we need to work on.”

Neville said he didn’t talk tactics at halftime, preferring to focus on the basics rather than tactics or systems.

Toni Duggan was introduced at the break and briefly England looked like they’d been read the riot act at the break, but it would have taken a repeat of the All Blacks comeback in the other ball-shaped sport to turn the match around.

There was a spark, but an all too brief one and still Lindahl was rarely troubled, bar pushing away one Duggan curler onto the head of Parris who couldn’t convert.

Bronze turned into the Lucy Bronze familiar to women’s football fans around the world when she darted into the box and put a dangerous ball across for Christiansen who, stumbling, could only lift her effort over the bar.

The crowd made their feelings known when Petra Pavlikova waved away Parris’s appeals for a penalty after slight upper body contact with Eriksson, the most drama for slight contact outside of the White House press room this past week.

Sweden sub Fridolina Rolfö tested Telford with an effort from range as England huffed and puffed, looking for a way back in.

But the issues remained. The issues that were glaring under Sampson, were glaring for Neville against the United States, against Wales at home, and against both Brazil and Australia: England struggles to score against the top teams.

Not because their strikers are necessarily poor, the chances just aren’t created enough for them to be put away.

It’s early days and Neville, a manager not only new to the women’s game but new to management full stop, will need time to fully implement his style of play.

There were some mitigating circumstances with no natural defensive midfielder available and Neville’s determination to give every player in his squad a start, even if it meant leaving Christiansen and Scott as the midfield two.

There are players still to return. England misses the balance Demi Stokes offers both offensively and defensively while Ellen White’s best year in some time for form has coincided with a period of injury that has seen her remain unavailable for England for a few games now.

Walsh, and maybe more importantly Moore, are also still to return but Neville now has to go away with much to ponder before England’s next game, which the head coach confirmed won’t be until the 2019 SheBelieves Cup when the Lionesses are set to face the U.S., Japan, and Brazil.

It’s a year in which Neville will, as he accepts, be judged harsher; firstly he is now comfortable in the role and the small matter of a World Cup looming on the horizon.

His first year has taken him from Southampton to Sarajevo, Nottingham to Newport, oh, and… Pavlodar. 2019 will kickoff for real back in the U.S., with Lyon still the required final destination, but Neville believes perhaps this result might just be what his team needs heading into a break.

“It’s been a really smooth 12 months but there’s this euphoria around this team, and rightly so, because they’ve earned the attention and expectation but what I addressed at the end is along the way we’ll get bumps, and this feels like a bump.

“This is a jolt and we’ve said to each other there’s a long way to go. You can beat Kazakhstan and Bosnia and Wales and Brazil and you can get a little bit carried away, that’s at myself first and my players second, so today is what we needed.”