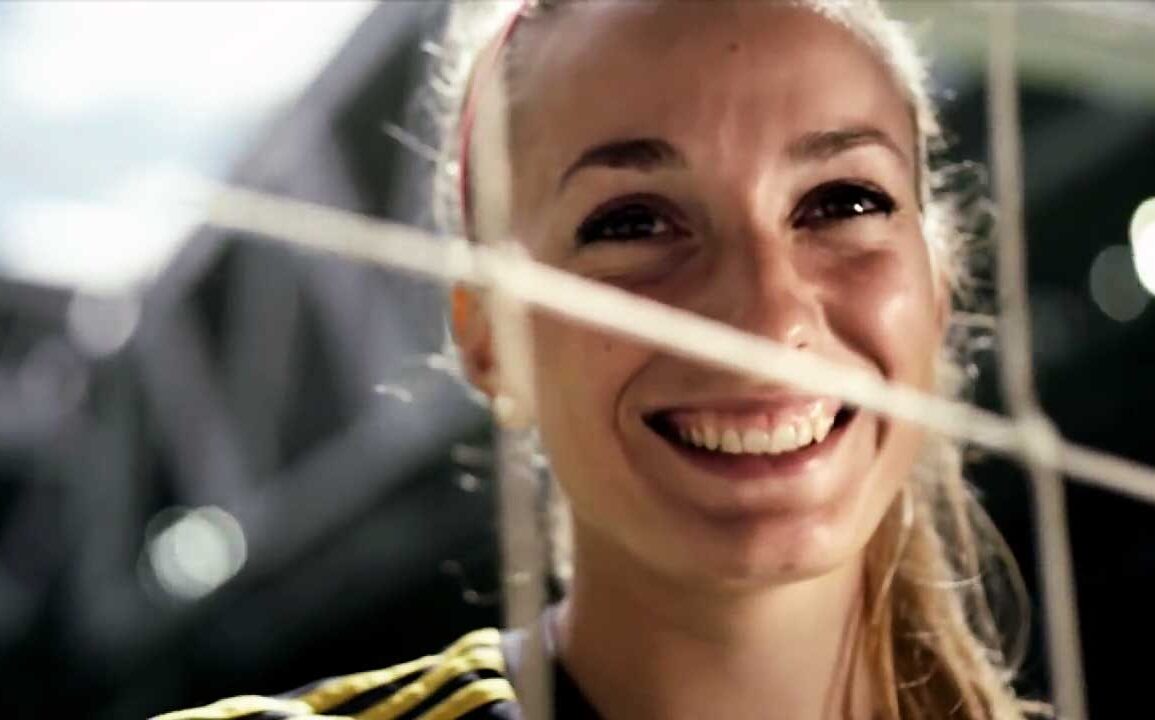 [dropcap]K[/dropcap]osovare Asllani has just returned from having coffee in Manchester City Centre when we meet at the Linköping team hotel 24 hours before their UEFA Women’s Champions League quarterfinal with Nick Cushing’s side.

It might be unusual for a player to sit and have a drink with the opposition the day before a game, but Asllani left Manchester in just August of last year and this is her first chance to catch up with old friends.

“I’m happy to be back here, it feels like yesterday,” she said. “I’ve been for coffee with some of the players, it’s been a while.

“I got on with the team, I got on with everyone. You want to win everything as a team but for me it’s about building relationships and being a good person. I wouldn’t go out now and have a coffee with people if we didn’t get on and I still have a huge respect for Nick and the club, I have only good things to say about them.”

But come Wednesday night it will be down to business when the 28-year-old walks out at the City Football Academy for the first time since last year, this time on the other side of the tunnel to her former teammates.

Asllani is back with the club she began her career with but is realistic about the Swedish champions’ chances of upsetting her former club.

“I think we have players who will cause City problems but we have to be realistic. It’s a young team who have lost players, but it’s a hungry team; we need to have typical Swedish discipline to beat City because they have a great team with experienced players. They are the favorites and we are the underdogs.”

Another complication for Linköping — and possibly Manchester City — is the different schedules both teams are on coming into the game.

The FA Women’s Super Leauge (FA WSL) champions are currently in the middle of the busiest period in the club’s history and will face an FA Cup tie against Sunderland in between the two ties against Linköping.

For Asllani and her teammates, however, the season is only just beginning. Bar a few domestic cup matches, the team haven’t kicked a ball in anger since the end of 2017 and lost several key players such as Jonna Andersson, Kristine Minde, and Cláudia Neto in the process.

While City may be match sharp, Linköping will be a lot fresher, but Asllani believes their opponents hold the upper hand.

“I think it’s an advantage to be in season whether you have a lot of games or not,” she said. “The more you play the better you get. We’re not in season and even though City say they’ve had a lot of games, that’s what you want. You want to play games — I’d rather play games every day than train!”

Asllani is also playing under a new manager with 36-year-old Marcus Walfridson now at the helm and more changes have taken place lately with the addition of 29-year-old former Liverpool and England striker Natasha Dowie.

Dowie was the first player to score against Manchester City on the opening day of the 2014 FA WSL 1 season and knows some of the City players as well as Asllani.

But have the pair been offering their new boss tips on their opponents?

“Yeah, of course,” Asllani laughed. “The coach is new so the first time I had a conversation with him he asked me and I told him. He’s scouted them a lot and we know everything we need to, we just need to follow our game plan if we’re to have a chance.”

Born to Kosovar parents but growing up in Sweden in the town of Kristianstad, Asllani spent the early years of her career with Marcus Walfridson before a brief spell in the United States with Chicago Red Stars in the Women’s Professional Soccer league.

Asllani’s big break came with a move to Paris Saint-Germain where she was regularly compared with her Swedish compatriot Zlatan Ibrahimović. Both star names of their respective club and national teams as well as both coming from Balkan backgrounds, Asllani quickly made a name for herself.

When she joined Manchester City in 2016, the move brought with it a lot of attention given the rare nature of a player leaving a top European club for England at a time when the FA WSL was still very much a work in progress.

Despite not always being a regular starter and her spell in Manchester lasting only 18 months, Asllani won all three domestic trophies, as well as playing and scoring in last season’s Champions League semifinal against Lyon.

“That’s what I wanted to do,” she admitted. “City had all the resources to succeed and the first thing I said when I signed was I wanted to win in England. I’m happy with my time here because when I look at my medals when I’m 40, retired with a family, I will be proud of that.

“I had a good time at City and I’m proud of what I achieved. I won’t remember every single game but I’ll remember the medals.” 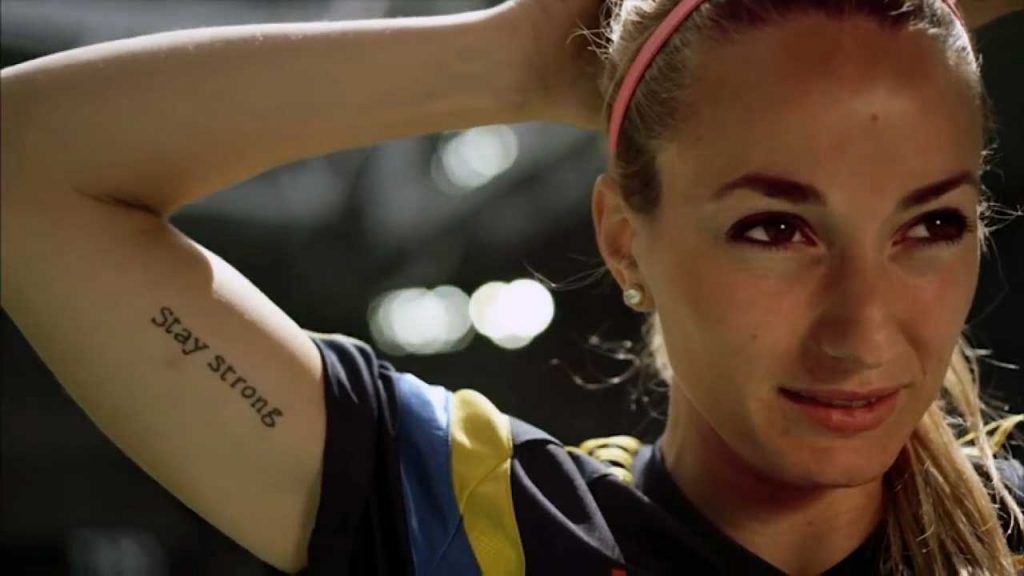 Now Asllani and her teammates are tasked with trying to bring Champions League glory back to Sweden. Even if they surpass City over the course of the next week, back-to-back champions Lyon will likely face them in the semifinal.

A Swedish side hasn’t won the competition since Umeå beat Frankfurt back in 2004, but had a team in the final as recently as 2014 in the form of Tyresö FF.

Despite a relatively rich heritage in the competition, Asllani accepts Sweden has been overtaken by other countries.

“We are representing Sweden but sometimes we have to be realistic. In Sweden the football is so organized, we used to have all the best players but now France, Germany, and England are putting more resources into their teams and we stopped.”

She added, “If we want to be the best, we have to put more in. The clubs are organized and everything is done properly but the economy isn’t there. Linköping is the only team left that are standing by themselves. City have support from a men’s club, Lyon do, Wolfsburg do, Barcelona do. We are standing with our own economy, our own resources with no help.”

But with less than 24 hours to go until the game, Asllani can have no time now for worrying about what the future holds for Swedish clubs in Europe as she prepares to face her former teammates for the first time.

Yet, clearly it’s an occasion she’s looking forward to.

“It will be different, it’s going to be,” she said. “Time flies so fast it felt like this game was so far away but now it’s here. It will be special but at the same time I’ll walk out as a Linköping player and give my all for the team.”

So why leave? After collecting all three domestic medals in just 18 months, Asllani was becoming part of a team fast introducing themselves as one of the top clubs in Europe.

But the midfielder felt she wasn’t being used in the correct position and wanted some form of continuity in her role on the field.

“The biggest reason [I left] was because I wanted to play in the same position. I play center midfield for Sweden and I see myself as a central player but at City I played a lot as a winger. I’m not a winger normally and I don’t feel I reach my potential as a winger. Playing central is so much better for me and I enjoy it so much more, I feel I play my best there.”

[dropcap]A[/dropcap]sllani also admits outside factors played a part in deciding where she should go once leaving Manchester and one night last May convinced her returning home was the best choice for her.

“What happened at the Manchester Arena affected me a lot,” she said.

On May 22, 2017, 22 concert-goers died after a terror attack at an Ariana Grande concert just days before Man City played Chelsea in a crucial Spring Series match.

She added, “It affected me as well because I saw the same thing twice when living in Paris. I was there when it happened and then it happened here, too. I lived pretty close to where it happened and I just started to think about life in a different way. I’d been outside Sweden seven years but when that happens, you ask yourself what’s important in your life — your family — my niece and nephew, and my friends. Mentally, I had to go back to Sweden and just try to be closer to the ones that I love.

“I had the same feelings in Paris when it happened. You reflect a lot and it’s not like you have ten lives, you have to do what makes you happy. I’m happy with that and I can look back at where I’ve played and what I’ve achieved when I get older.”