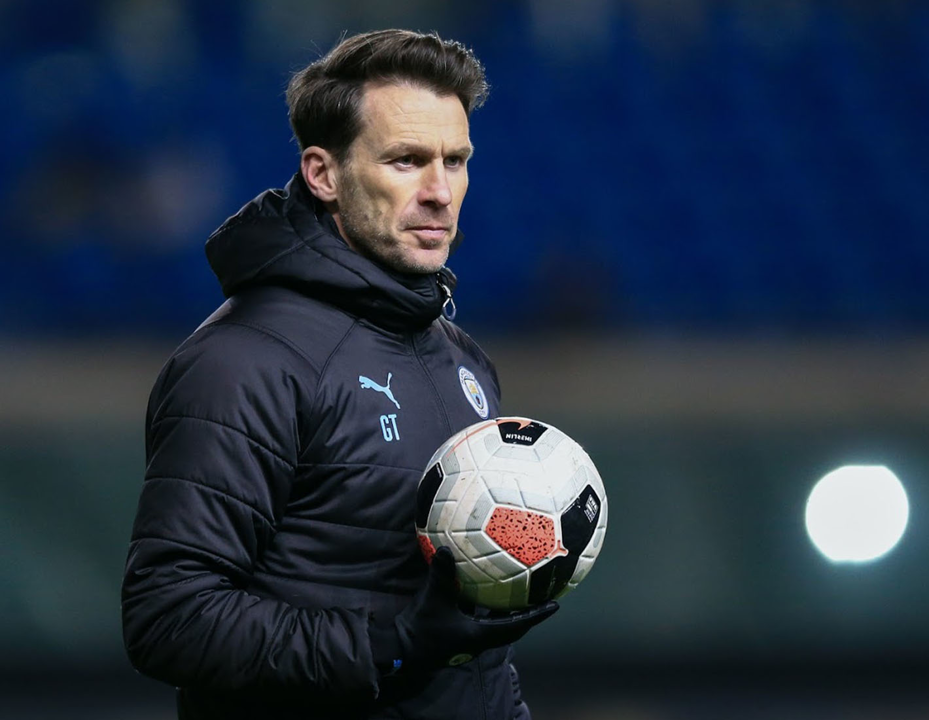 New Manchester City Women head coach Gareth Taylor says he’s “honored” to be given the chance to replace the outgoing Nick Cushing after his appointment was confirmed on Thursday morning.

The former Manchester City player and Wales international moved across from coaching the Under-18s team on the men’s academy side of the club, but despite the difficulties surrounding the current situation and the FA Women’s Super League season being curtailed, Taylor is looking forward to getting started and believes he has the right “insight” for the job, despite it being his first in the women’s game.

“I feel I’ve got a really good insight, the best insight possible to be the head coach,” said Taylor on a virtual press conference on Friday afternoon. “I’m very honored. I think it was a thorough process with Gavin [Makel, Head of Football and Omar [Berrada, Chief Operating Officer], and many of the other staff. I personally feel I’m ready. It’s a big step up with big responsibility and I’m really excited about getting started and the future.”

Taylor said he has already had a call with his new players and will be speaking to them again on a full staff call later on Friday as he and his staff, which includes interim head coach Alan Mahon, prepare for an uncertain few months as the wait now begins to find out when the 2020/21 FA WSL season will get under way.

Taylor may face the same skepticism as other managers coming into the women’s game for the first time when it comes to their knowledge of the sport and indeed their own team, but the 47-year-old admitted he’d done plenty of research even before taking the job to make sure he’s up to scratch on the work that needs to be done over the summer.

“It’s given me an opportunity to get up to speed,” he said. “It was always something I took an interest in. If you understand the life of a coach, we watch any game. Youth team, first team, no matter what. I’ve been watching a hell of a lot of our previous games, probably every England game over the last two years and focusing on our international players and their national games. Even games which haven’t involved our players. I’ve really enjoyed the process and been crazy mad writing notes.”

A large part of the offseason, especially one which could now be longer than usual, is ordinarily dominated by the transfer window, with the bigger clubs such as Man City always bringing in plenty of interest as to who they sign and sell over the summer.

The club has been linked publicly with a move for Olympique Lyon superstar Dzsenifer Marozsán and a return to Manchester for fullback Lucy Bronze, and Taylor said he has been thoroughly involved with the recruitment process without commenting on any names which might arrive.

“There’s not really a set answer for it,” said Taylor. “With this situation and certain demands from potential other leagues around Europe, it restricts you a little bit in those recruitment ideas you have. Gavin and Alan have done a tremendous amount of work behind the scenes, I’ve come in late to the party but I’m fully aware of the areas and the potential people we’ve identified to improve the squad and that will continue on for the next couple of months.

“I’m in those meetings regularly now,” he added. “While the process for my appointment was ongoing I was having discussions on potential players and more recently discussing players on a regular basis. We want to improve across the board, we’ve been successful, but to be successful at a higher level or over a longer period you’re always going to need to make improvements and need a full squad, so I’ve been very involved in that. There’s been a lot of meetings over potential targets and I’ve really enjoyed that process. Starting a new job is never easy but this has been one of the easier transitions in terms of adapting to something new, just through those previous relationships with staff and players and having a close-up view of how the women’s game has evolved.”

Head of Football Makel, who joined the man he has appointed for the future on Friday’s call, also offered an insight into the current work going on behind the scenes as we head into the summer.

“It’s a bit of a strange market we’re operating in,” he said. “But as a club, recruitment is on a continuous basis so it doesn’t necessarily change our plans on who we want to talk with and the areas we’re looking to strengthen. Our ambitions are well documented and we’ll try to find the right people we feel will take us on an even better journey. Obviously once we have something to announce, we’ll announce.”

Makel also offered an update on the current situation regarding how the FA WSL will end after the FA WSL and FA Women’s Championship board took the decision to end the season at the start of the week, but a decision on how it will doesn’t appear to be coming in the immediate future.

“We don’t know. There was a board meeting which took place this week and the recommendations go ahead to the FA board, but we haven’t necessarily been given a timeline as to when to expect a decision on that. It’s not an easy one, but it’s all being considered across the game. We’ll see what happens and we’re comfortable with whatever decision is made.

“The last 10 weeks has been extremely challenging, none more so than for the players who want to see their teammates, play in front of the fans, and get back on the pitch.”

On the managerial front, Makel admitted it wasn’t a straight forward decision to appoint Taylor and said the club did look far and wide for a replacement for Cushing, who moved to MLS side New York City FC as an assistant manager back in February, but after discussions he admitted it became clear that Taylor was the right man for the job moving forward.

“It was about finding the right person to take us on the next stage of our journey,” he said. “Gareth is well embedded in our values and the way we play but it’s everything else, his exceptional leadership skills, the way he has developed players, that made me think more about this decision. He understands the fan base, the local community and soon it became a no-brainer. We looked everywhere, we looked outside, we had to go through that process but Gareth became top of the list as soon as we started to whittle it down.

“We did our due diligence on a host of people. Some we found it wasn’t the right time given where they were in their own career, there was interest from elsewhere too. This is the first time we’ve gone through this process, but Gareth became by far and away the leading candidate.”

Taylor said a conversation with Makel even before the United Kingdom went into lockdown earlier this year persuaded him that it might be the right step for the next phase of his career, and while he intends to use his academy skills to continue City’s tradition of utilizing young players, he offered a brief glimpse that suggested he may also look more toward experienced players when entering the transfer market.

“I’m just so grateful,” he said. “My coaching style and philosophy is important to me. We want to win but we want to win with style and a bit of class. I have some fundamental morals that I hold dear to me but if I’m the same coach in five years I’ll be disappointed in myself.”

On the club’s tradition of developing young players, he added, “We have to look to the future, but there’s a balance. We have to monitor the talent we have coming through and there’s some great things happening at the academy and the Regional Talent Centre. I always think there’s a balance if you want to progress, you can’t just rely solely on the young players. It’s stood the test of time but we’ll always have an eye on the talent available but we’ll couple it with the work in the academy.”