Nikita Parris on Maturing as a Player, Working on the “Process,” and Becoming the Best 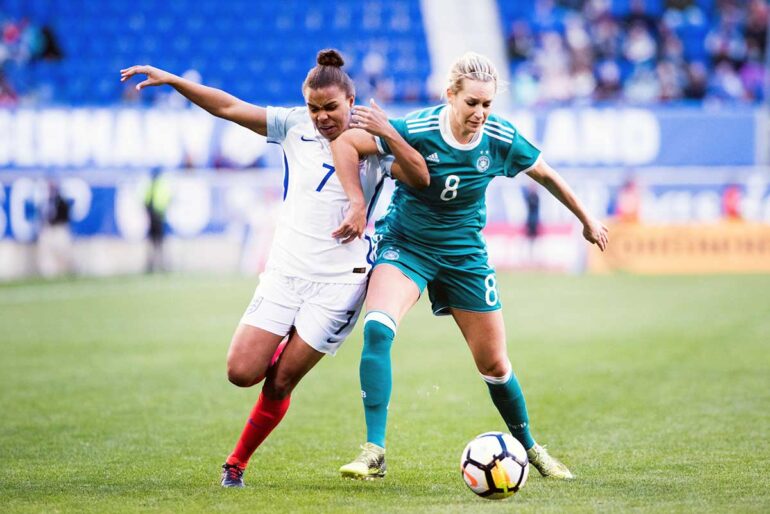 Very few players can claim to have had a 2018 quite like Nikita Parris. The flying Manchester City winger scored 11 goals from January on in all competitions for her club while her record of eight goals in 22 appearances for her country is impressive to say the least.

Despite her brilliance and continuous improvement on the pitch, questions and criticisms over her temperament and antics on the pitch have circled over the 24-year-old since she hit the big-time.

But Parris says she has “matured” as a player and adds her passion comes from a sheer will to win football matches.

“I think I’ve grown as a player and a person,” said the Liverpool-born winger. “I’d say I’ve matured. On the odd occasion you might still find me shouting or screaming at a referee because I do get increasingly frustrated but I have tried to control my temper.

“My passion will always remain because I love football, I love fighting for my club and country and ultimately I want to win. All I think about when stepping onto the pitch is putting in a performance that ensures my team wins.”

Parris also credits her manager at Manchester City, Nick Cushing, with pushing her development and raising for the bar for her since she initially joined the club in 2015.

After working with Mo Marley and Andy Spence at Everton, Parris joined Man City on loan initially but did enough during her season at the City Academy to persuade the club to make the move permanent at the start of City’s soon-to-be unbeaten campaign.

“When you come up against experienced players you grow because you have to,” she said. “It’s a much quicker environment, you have to move the ball quicker, make that decision quicker, and I think that’s what has come into my game.

“I make decisions earlier now and you’re seeing for both Man City and England I’m scoring more goals because I’m more comfortable in those positions now. As well as maturity I’ve worked hard on my composure. You can’t overthink, you have to make sure in those moments you take your chance. When I was younger my whole thought process was just about scoring and I didn’t think about the process leading up to scoring. I was so fixated on scoring I forgot all about the process, I’d slash at it or overthink it.”

She added, “Nick has worked tirelessly with me both on and off the pitch, going through videos with me to make sure my game keeps improving.”

As well as working with Spence, Marley and Cushing, Parris has also worked with former England head coach Mark Sampson and now been a regular under current head coach Phil Neville.

Parris made her England debut under Sampson exactly two years to the day she is speaking ahead of Friday’s qualifier against Russia, the opposition of Sampson’s last game in charge in September.

Two years on from her debut against Serbia, Parris believes the team’s ethos hasn’t changed but credits Neville with pushing the squad forward.

“He’s introduced a winning mentality,” the winger stated. “He’s used to winning because of the background he’s had with Manchester United. As a player, you want to win trophies and look back at them at the end of your career. The values and beliefs have remained the same, togetherness has always been our mantra and that hasn’t changed.”

Under the scope of off-field issues when the teams last met at the start of the qualification campaign, Parris scored the opener as England dismantled their opponents, 6-0, at Tranmere’s Prenton Park, but Parris isn’t expecting such an easy encounter this time around.

“It will be a different atmosphere and it will be a 3G pitch but we’re concentrating on three points and that’s what we’re aiming to come back with.

“It’s the first time I’ve been to Moscow,” she added. “I’ve been to Russia with Man City and that was a good time for us so hopefully Friday will be too.”

England have already progressed from third to second in the world rankings during Neville’s six months in charge and Parris believes the extra competition for places in the squad is pushing the current players on to become better.

As well as the extra pressure coming from an expanded player pool, Parris believes having a core of players from her own club at Man City is helping matters for her and her team mates.

“The core of this squad is almost half Man City, half Chelsea. It helps because you play together and you know each other.”

She added, “We want to be the best and the best for a long time and having a strong league will ensure that. Beth [Mead] has come in lately and we’ve got players like Georgia [Stanway] and Lauren [Hemp] knocking at the door. Moving forward, we’ll work on going one step further, from third to second to first. They’re the steps we’ll take to winning in France next year.”

Parris also had a word for former Manchester City teammate Lucy Bronze, the right back turned up on Monday afternoon fresh off the back of winning the UEFA Champions League with Lyon at the first time of asking.

“I wasn’t envious of Lucy, I was absolutely delighted for her, I was buzzing,” she said, smiling. “Lucy’s worked so hard, she’s the best right back in the world for me. She wanted that Champions League so much when she went to Lyon and I’m so happy for her that she got it.”