England Fight from Behind to Overcome Brazil in SheBelieves Cup Opener 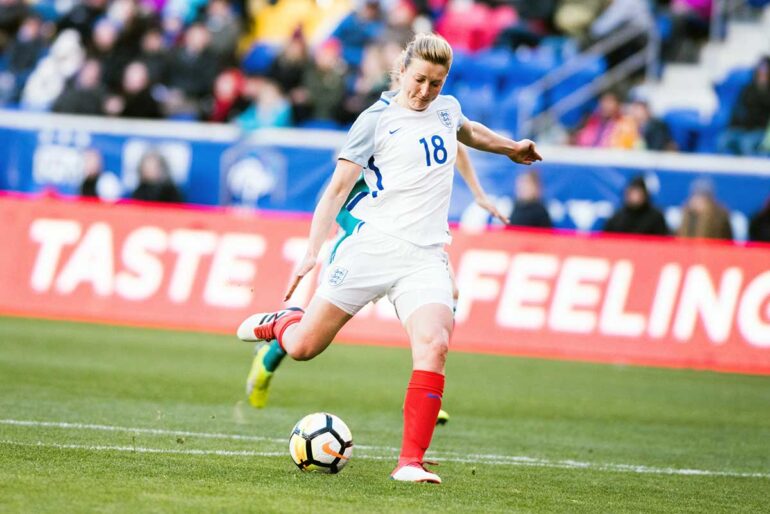 For 45 minutes it looked as if England had simply finished the match against Sweden in November and kicked off against Brazil, such was the sloppiness and sheer lack of cutting edge in the first 45 minutes of their SheBelieves Cup match.

Any worries Brazil may have been even less thrilled by the freezing Philadelphia conditions than they were in England late last year were soon put to bed as Vadão’s side controlled the first half.

England, sticking with the now tried and tested 4-2-3-1, lined up pretty much as would have been expected given the players available and showed inside the first couple of minutes how effective it can be.

When Nikita Parris slipped in the overlapping Lucy Bronze, who pulled it back to Fran Kirby, it looked like another day in which England would torment the Brazil defense but it never really materialized, at least not in the opening 45 minutes.

Instead Brazil, conducted by the ever-graceful Marta, took charge. They defended fairly resolutely and countered at a blistering pace, able to keep the ball much easier and utilize it better than their European counterparts.

England simply couldn’t keep the ball under duress from the Brazil press. Neville’s side wanted too much time on the ball, a notion which would cost them eventually when Steph Houghton was robbed in possession by Marta, the Orlando Pride attacker then turning the England captain and going down under Bronze’s challenge.

Despite Bronze winning the ball, referee Katja Koreleva pointed to the spot and it was Andressa Alves who stepped up to send Carly Telford the wrong way to make it 1-0.

England looked lethargic, sloppy, and disconnected, a trait not uncommon during Neville’s time in charge so far but the second half was a completely different Lionesses side.

While it wasn’t perfect and there are some clear issues with balance that still remain between combining attack and defense, England showed glimmers of how effective they can be going forward under Neville.

Just four minutes after the break, England for the first time created an attack which didn’t rely on going wide to Parris or Karen Carney.

Kirby, who had been quiet in the first half, looked like a player unleashed as she slid through a neat pass to Ellen White — who had also been quiet — and the Birmingham striker took a touch before hammering a left-footed effort past Aline.

England equalizes. 1-1 in the 2019 SheBelieves opener. With the goal, Ellen White becomes the all-time leader in #SheBelievesCup goals. pic.twitter.com/fqn1Uc7C2t

All of a sudden everything was going through Kirby, who continued to show signs of why Neville has used her in the No. 10 role. Finding constant pockets between Brazil’s midfield and defense, Vadão’s side didn’t quite know what to do as she was regularly able to feed balls into the channel for Parris and White.

It was a simpler pass out to the right from Kirby which led to England’s winner. Substitute Beth Mead hit a ball across goal which flew in the top corner, though whether it was a cross or a shot, only she knows.

Beth Mead. And England is up, 2-1. pic.twitter.com/FdXPI7iVpb

Neville moved Bronze into the midfield to use her energy and drive going forward as Rachel Daly came on to play at right back and England looked to shore up at the back and take three points into the final two games.

There were once again a few wasted chances and some nerviness at the back as Brazil looked for an equalizer but in truth Telford didn’t have a save to make all game. Neville will look at the lack of cover at right back when Bronze rampaged forward as it was a continuous alley of opportunity for Brazil and if Geyse had squared for Debinha at 2-1 it would possibly have been a different outcome than an England win.

The passing under pressure still needs some work, as does the transition for England between attacking and defending. Neville is without some potentially key players to his system for the whole tournament so we may not see the finished product until the April and May friendlies but the second half will have calmed some jitters in the squad ahead of arguably tougher tests against the United States and Japan.

It wasn’t vintage and wasn’t the best we’ve seen of England under Neville, but it was a much-needed second-half turnaround off the back of a disappointing defeat to Sweden in November. Replay that second half against the U.S. and Japan and it will show just how close England can run some of the World Cup favorites.