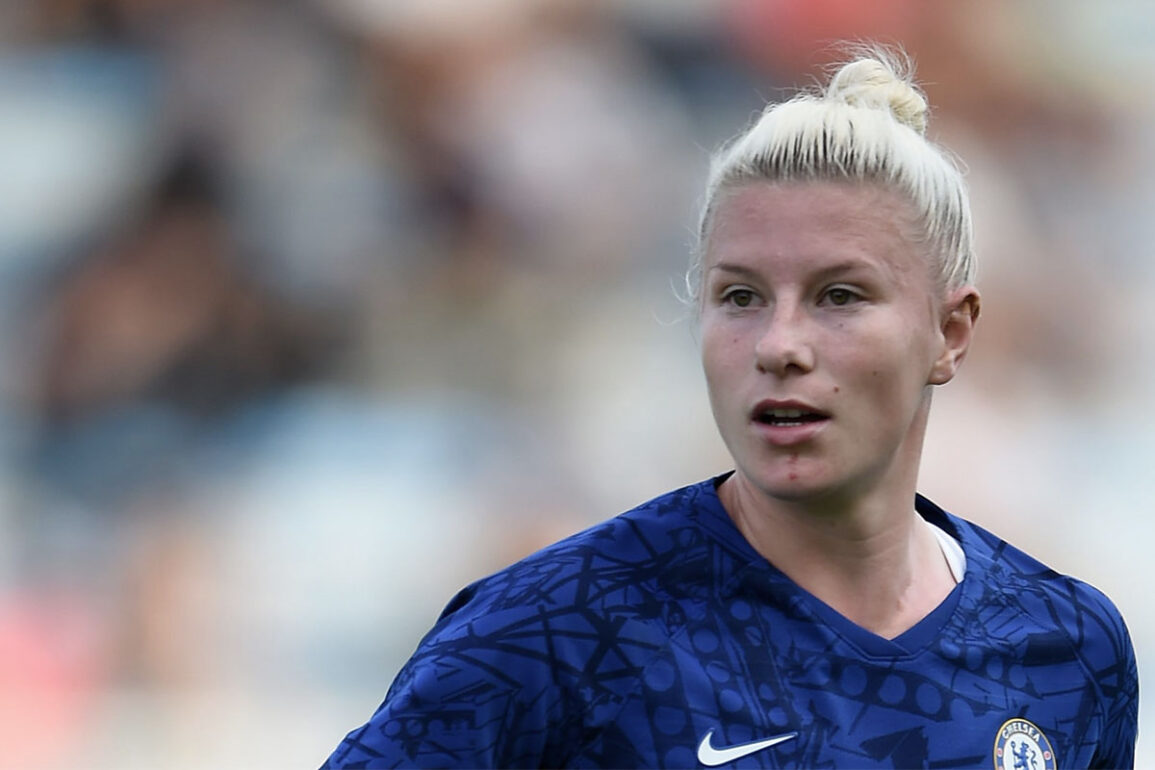 For all the talk of Sam Kerr‘s arrival and the battle for supremacy against another top international striker in Arsenal’s Vivianne Miedema, it remained no surprise that it was Beth England who played the star role in Saturday’s Continental Cup final.

While Kerr has enjoyed a career of international stardom and comes to England off the back of three consecutive National Women’s Soccer League Golden Boots and Miedema is breaking – or close to breaking – every domestic and international goal scoring record going, England’s journey has been more modest, but no less difficult.

The Barnsley-born forward spent years fighting away as a part-time athlete at Doncaster Rovers Belles, juggling football with both studying and working off the pitch.

After joining the then FA Women’s Super League champions in 2016, there was far from an instant impact in her first 18 months before being loaned out to Liverpool for the 2017–2018 season.

At the time, those who left Chelsea on loan rarely came back, and England has admitted previously her confidence was more than knocked by the belief her manager Emma Hayes no longer wanted her.

But after a loan spell that saw her score 10 goals in 16 games, England returned to Chelsea and has gone from strength to strength ever since.

This season has seen her reach the highest ceiling yet. If it wasn’t her curling effort on the opening day at Stamford Bridge, her looping effort in a 4–1 thumping of yesterday’s opponents or a stunner against Manchester City last week, then it was certainly her brace that sealed Chelsea’s first Continental Cup on Saturday night.

The “England for England” campaign is no longer an on-running pun, but a reality after the 25-year-old made senior international her debut last year and scored against both Brazil and Czech Republic.

It has been far from a simple journey for England, but she’s got plenty of Yorkshire spirit and has both fought and earned her way to the top of the game.

“How long have you got?!” she laughed, when asked to reflect on her journey after the game. “Honestly, I’ve said numerous times, everyone’s journey is different. I can’t say mine has been easy, it has just been a long old roll.

“It’s just putting myself out there, trying to prove myself. I have always been a grafter, my parents brought me up to never give up and be a worker and thankfully, I am getting results for that and Emma is starting to, especially this season, really show her faith in me leading that front line as a nine.”

To the youngster who got loaned out at a point where she hadn’t yet been able to make an impact at the club, it’s no surprise to hear the now 25-year-old didn’t necessarily believe she could reach the point she now has.

Her exploits in an intense cup final may mean she misses out on the opportunity to start against the United States on Thursday in the SheBelieves Cup, but just to be in this position brings a smile to England’s face because she admits she didn’t always believe she could do it.

“I think at times probably no,” she said. “A lot of people that know me know my confidence was always [something] I did battle with and I have had a lot of people help to try and boost that and thankfully, I am in a position now where I am much more grown up, I would say mentally as a well as physically.

“I’m used to the game and how it is changing and just the faith Emma is putting in me to lead that front line is a testament to that in itself and I am thankful to be at this club and play for this team.”

Emma Hayes herself spoke post-match of how far England has come since returning to the club in 2018 after a year with Liverpool, a whirlwind 18 months now ensuring she is the club’s go-to No. 9 to lead the line alongside Kerr.

While at the time there was no guarantee England would ever return to the club, Hayes admits she didn’t know for sure if her striker would cut it at the very top.

“I love the story because she had to earn it,” said Hayes. “There was absolutely no way I was going to give it to her easily, no way, she will tell you that I’m sure. There’s nothing more joyful when a player who you don’t really know if they are going to be able to cut it at the top level gets their head down and put everything into their career.

“The talent was always there but now you are starting to see the fruits of hard work and perseverance and I really think England have got a player that can add something to them going to the next stage. We were saying during the week she seems to be scoring the hardest goals and missing the easy ones, well she can say the reverse to me today because it is probably the easiest finish she is going to have. She’s really a credit to herself and her family.”

Despite England giving Chelsea an early lead to continue her good form, it looked as though the main story may lie elsewhere until the 92nd minute.

Leah Williamson, an Arsenal fan through and through, equalizing in the 84th minute shifted both the momentum and the narrative as it looked like Joe Montemurro’s side would go on and make the best of their dominance, with a homegrown star being the one to get them back in the game.

But in retrospect, it was perhaps always obvious England would have the final say as she tapped home from no more than a yard after Maren Mjelde sent a low ball across goal in stoppage time.

“It’s funny because after that happened [Arsenal scored], Erin Cuthbert literally pulled me and said, “Just bring it, I know you have got something else in you,” and she kept saying it in the shower then, she knew something was coming.

“I think the girls, even after such a late equalizer, we had that belief and we couldn’t have lasted probably another 30 minutes with all the pressure Arsenal were putting on us so we knew it was now or never.”

England now flies off with the rest of her teammates for a demanding schedule in the U.S. as the Lionesses look to defend the SheBelieves Cup.

England may line up for England for a World Cup semifinal rematch against the world champions on Thursday night in Orlando, but head coach Phil Neville could also go for the fresher Ellen White who wasn’t involved in the final.

But with an eye to Euro 2021 with his squad selection, it would be a good time to test the in-form and confident striker against the best team in the world, but it would be no mere token gesture, rather more a deserved recognition for her outstanding recent form.

England, though, is just looking forward to getting more game time under her belt with the Lionesses just five caps into her international career, while Neville admits she is now right up there alongside White when it comes to his striker options.

“I’m really excited,” said England. “It’s my first proper tournament out there for the national team. I’d be buzzing if we could bring the trophy back because I think the performances at the back end of last season weren’t a credit to how well I know this England team can play, so fingers crossed we go out there as a team and absolutely smash it and bring the trophy back home again.”

Meanwhile, Neville last week spoke of the long-term assurances he gave England after not selecting her for last summer’s World Cup in France.

“I think what you see in Beth England, she was really unlucky probably before the World Cup, she probably just started to hit her form probably too late,” said the Lionesses head coach. “We said to her before the World Cup, when she came into the camps before the tournament, that she will be getting opportunities after Christmas, and what we’ve seen is a girl that’s just rapidly improved every single time that I’ve seen her and she’s playing in a team full of confidence.

“But in a team full of probably experienced international footballers looks to me the standout one, and every time I see her play she’s added another bit of quality to her game. Without doubt, her and Ellen White are the best two center forwards in England on form and rightly so deserves her place in the squad and, do you know what, she will be getting an opportunity in SheBelieves to play.”

UPDATED, 03/01/2020 @ 1:29 pm ET: An earlier version of this story gave Erin Cuthbert the assist on Beth England’s second goal of the match instead of Maren Mjelde. We apologize for the error.