Austria Success is No Surprise to Laura Feiersinger 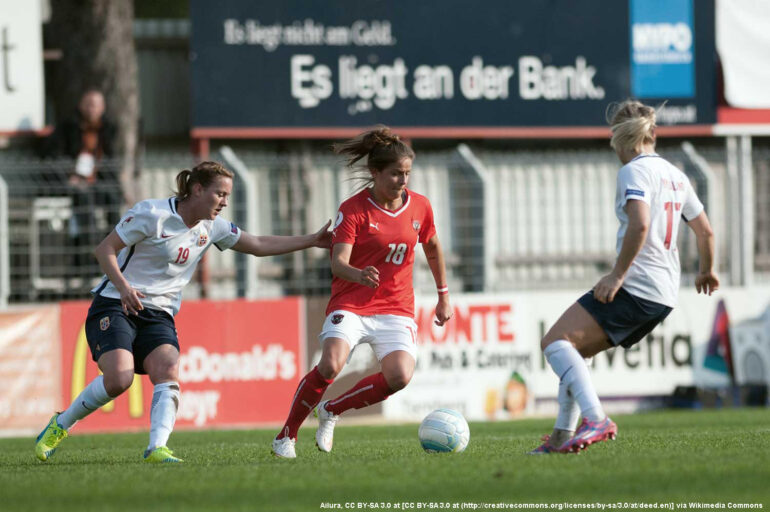 Austria wasn’t on many people’s list as the potential winner of group C. However, after the country’s impressive 3-0 win against Iceland, it’s become clear that Europe is seeing the rise of a young team that could go even further.

Iceland coach Freyr Alexandersson was disappointed about his team’s performance against Austria, but full of admiration for the opponents.

“Well done, well-played. Great mental strength, well coached,” he said. “I’m very impressed and have been for the whole tournament. I am looking forward to see that Austrian team grow even further.”

One-and-a-half weeks into the tournament, journalists talk about the Netherland’s Lieke Martens, Jackie Groenen, and Shanice van de Sanden, Denmark’s Pernille Harder, and England’ Jodie Taylor as being the best players yet. We might even add Austrians Nicole Billa, Nina Burger, or Laura Feiersinger to that list.

Fourteen of Austria’s 23 players play in Germany’s Frauen-Bundesliga, which gives them regular games at a very high level. One of those players is 24-year-old midfielder Laura Feiersinger, who plays for two-time German Cup finalists, SC Sand.

“It’s great to hear that Iceland’s coach says such nice things about us,” she said. “We are working very hard for a couple of years now and [that] we have managed to play like this now is really wonderful. We are a young team, so there is a perspective.”

As the Austrian success is unexpected for most of us, it’s no surprise to a few experts.

“Well, some people who have watched us more frequently, have thought we could go this far, but we lost two matches against the Netherlands and England, which resulted in some negative reviews, but I think that now other teams won’t underestimate us anymore,” said Feiersinger.

With England advancing as Group D winners, the Austrians will play a quarterfinal against Spain.

“Spain has a lot of possession. I haven’t seen them so much here. A year ago we played a friendly against them, but since then they have gotten further, so we expect a very strong opponent, but that is the knockout phase and everything is possible then.”

And the Spanish team, losers of its final group-stage match against Scotland, would do well to take them very seriously.