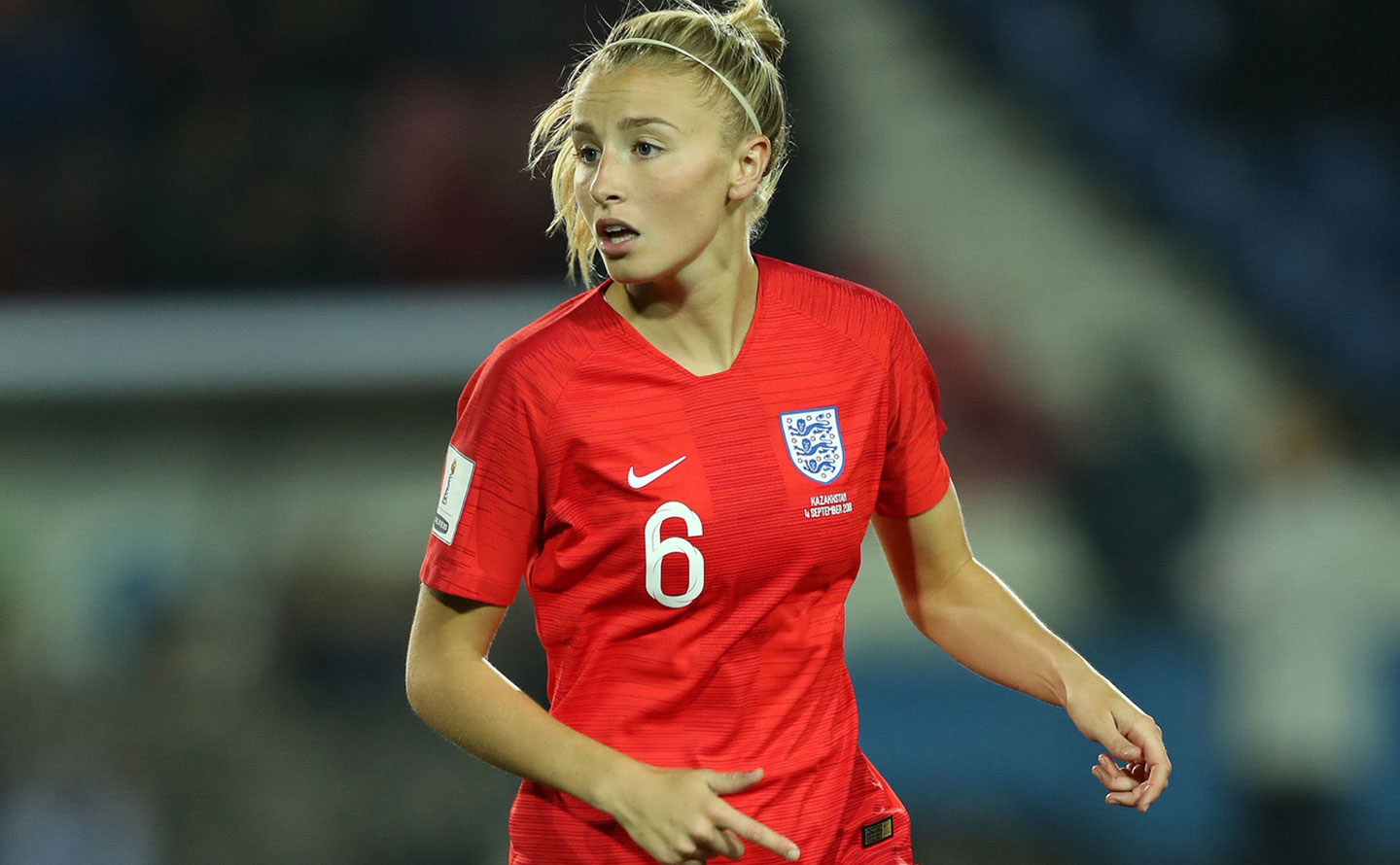 Richard Laverty·
EnglandEuros
·July 30, 2022·8 min read
Share
Tomorrow is not the end of a journey, but the start of one.Leah Williamson

England head coach Sarina Wiegman was in a typical Sarina Wiegman-like mood as she addressed the media for the final time ahead of Sunday’s Euro 2022 final against Germany.

Brushing off questions regarding anything unrelated to the match, it is a stance Wiegman has taken throughout the tournament to keep both herself and her team fully focused on the task ahead, an approach that has worked perfectly so far.

As ever, Wiegman refused to elaborate on her team selection for the game after naming an unchanged lineup in all five matches so far, but admitted “everyone is fit” and that she will make “hard choices,” with all 23 players once again fit and available to be involved.

Whatever happens, Sunday will be a landmark occasion for the Lionesses. Win, and it is a first major trophy for a senior England women’s side, and a first on either side of the sport since 1966.

Lose, and it will still be a first final in 13 years, since a team that included Jill Scott went down 6–2 to the same opposition, and Wiegman is aware of what’s at stake in front of a sold-out Wembley.

“Well, a couple of years ago I didn’t think about that,” Wiegman said of the record crowds England has experienced this tournament. “It’s really nice, but you don’t think about that when you start playing or coaching, you just love football and your work.

“It’s really nice to have this occasion, but it’s just a game we go and play. Yes, it’s a final, but we approach it like any other game.”

Wiegman joked after the semifinal win against Sweden she would go to her “bunker” for a few days to avoid all the talk around the final, but admitted things have remained quite “calm” around camp, something she has consistently tried to remain the same throughout the tournament.

“We went back to the Lensbury, we did the recovery, the training sessions, the things we have to do to prepare for tomorrow. It’s been pretty calm, yes.”

Start of a Journey

Sat alongside Wiegman for the final pre-match press conference of the tournament was captain Leah Williamson, who also exerted the manner of calmness that has been evident from Wiegman, in all 23 players, throughout Euro 2022.

The final will mark 10 years to the day Williamson was a mere teenage spectator as Team GB took on Brazil at Wembley in the 2012 Olympic Games, and the defender is well aware of the occasion, but also the impact the day could have on the future of the sport.

“None of us have been in this position before,” said Williamson. “It will be a new one for all of us. In a tournament you grow game by game, the opportunity for growth in this tournament has given me confidence I’ll be ready for tomorrow whatever emotions come my way.

“What we’ve seen already is that this hasn’t just been a change for women’s football, but for society in general, how we are looked upon. Tomorrow is not the end of a journey, but the start of one.”

The Arsenal star continued: “I’ve only ever been involved in this workplace, in football, but I think in most workplaces across the world, women still have a few more battles to face and to try overcome.

“I think that for every success that we make, for every change of judgement or perception or opening the eyes of somebody who views women as somebody with the potential to be equal to her male counterpart, I think that makes change in society.

“I think that’s a powerful message that we have the power to, in a typically male-dominated environment, these strides that we take forward can impact everybody on that wider scale.”

Williamson is also aware of getting too ahead of herself. While one nation will be crowned champions by this time tomorrow, one will be left with another “what if,” a feeling much more familiar to the Lionesses than potential nine-time champions Germany.

Asked about Sir Bobby Moore, the only other England captain to win a senior tournament, having a statue outside the stadium they will grace tomorrow, Williamson said it would be dangerous to look further ahead than the game itself.

“It would be silly to think any further ahead than the 90 minutes. Tomorrow is a day of opportunity, that’s the main thing, the stakes are so much higher. But this is what we live for and why I play football.

“It’s a nice feeling knowing tomorrow, regardless of what happens, we return home. We looked each other in the eyes and agreed that sacrifice would be worth it. It’s tough not seeing family, but tomorrow is one final push to achieve what we want to achieve. The sacrifice of not seeing your family for six weeks will be worth it tomorrow.”

Neither team has had it easy to get here, even if there’s a common feeling among both camps and around Europe that the two best teams in the tournament have reached the final.

England was five minutes from elimination against Spain and had heart-in-mouth moments against Sweden, while Germany had to dig deep to get past both Austria and France.

Wiegman, though, believes the tests the team has faced not just in the tournament, but in her time in charge all round, has made her squad and staff even stronger.

“It’s good to get all these experiences,” said Wiegman, looking for a second straight European title. “What we tried to do was prepare for on and off the pitch and if you prepare well, some of those circumstances will occur and we know how we can react.

“The team has done really well, we grew throughout the season and even more so in this tournament. We’ve had lots of tests and I think we did pretty well. The group stage looked easy, but it’s never easy. The Spain game was tight and close, Sweden looked a little easier, but we had hard moments and moments we dominated, and here we are now.”

Wiegman, however, as has always been the case, gave little else away. Admitting her team had practiced penalties was about as open as she got, swatting away talk of Germany’s history with England and whether there is more pressure on her side ahead of the game.

“I don’t have my thoughts on that [pressure]. My thoughts are on the game, our team and how we want to approach the game. We’ve analyzed Germany, we make a plan with the technical staff, then we train. That’s mainly what my focus is on.

“I’m not stupid. I know it’s big, it’s incredible and I enjoy that. You see it, you’re aware of it, but then you come back to what your job is and that’s Germany.”

On the history between the two sides, largely in the men’s game, Wiegman added: “I think there is some rivalry, but whoever we would play against, there would be some rivalry, because we want to win that final. Netherlands and Germany has some rivalry too. Germany has a very good squad, we will just approach it, again, as every other game.”

Williamson, too, wouldn’t be drawn into a discussion on the nation’s football history.

“I think it’s a good narrative for you guys, it’s a fairy tale fixture with the history behind it. For us, we wouldn’t expect to get to a tournament final and not play the best team and the two best teams are in the final. They’re playing their best football and we are playing our best football.”

Earlier in the day, Germany head coach Martina Voss-Tecklenburg insisted most of the pressure was on England, with the capacity crowd largely behind the Lionesses, and both were only too happy to turn the tables on their opposition.

“I’d be surprised if she didn’t say that,” said Williamson. “She’s going into the game with the same goal as us. 90 minutes of football will tell all, that’s what we’re focused on and probably what they will be too.”

“The pressure is on both [teams],” Wiegman added. “We both want to win the final, we both have a very good squad. It will be a good game, it will be exciting, with two teams who both want to win.”

However, neither are daft enough to think this will be a walk in the park despite how many fans are roaring them on tomorrow.

Germany has conceded just once throughout the tournament, the same as England, but in more unfortunate circumstances as a Kadidiatou Diani effort came back off the post and went in off goalkeeper Merle Frohms in the semifinal.

They have been arguably the most organized, with the brilliant Lena Oberdorf in midfield and Alex Popp scoring in every attack as the team’s number nine.

“At some point it might get a little physical,” said Wiegman on what she expects from the game. “They can play very direct, straightforward, physical. That’s what we expect, we did see some things we might want to exploit, but we’ll see that tomorrow.

“That’s the nature of any German team,” added Williamson. “They’re consistent, regardless of the players they have. I think our game is so strong, the way we play to combat that. It will be a good game, two different approaches potentially, but we have the fight in us, it just comes out of us a little differently. It’s something to be aware of, but not something we can’t match.”

Williamson has become one of the best speakers when it comes to what tomorrow may mean, and indeed what the whole tournament on home soil has meant, with records broken in the stands and on TVs at home, with 9.3 million people tuning in to watch the semifinal win over Sweden.

The final is expected to smash the record for a European Championship final, men or women, and Williamson hasn’t forgotten those who made this possible, and once again reflected on that day 10 years ago she was in the stadium as a supporter.

“It’s been unachieveable for so long. It’s Wembley, 90,000 people, hopefully 90,000 England fans. People didn’t have the opportunity before, so many have an interest and now have the opportunity to watch it because it’s been made available. Not so long ago that wasn’t possible and that’s one of the nicest things.

“That day was another amazing opportunity for me my parents facilitated, to put women’s football in front of my face and convince me it was the norm. It was incredible, the falloff is what we hope doesn’t happen tomorrow, like it did after the Olympics. We hope everyone who has got on board with us stays with us, we can’t let that happen again, the interest can’t go away.”

While every player on the losing team will be heartbroken, Williamson aims at least to enjoy an occasion that will likely never happen again — a final on home soil in front of 90,000 of their own fans in the nation’s national stadium.

Admitting she hasn’t always been able to soak up big occasions in the past, the defender said this time she and the team will aim to enjoy it, no matter how it ends.

“There’s been times in my career I’ve done it, even when I’ve won I’ve felt like I’ve lost because I haven’t enjoyed that moment. The environment we’ve created has allowed us to enjoy it and soak it all up with the fans.

“I’ve always said why shouldn’t we enjoy it? We’ve worked so hard, but there’s that focus and composure which is more necessary before a final. The only way you can learn that is from experience and from getting it wrong in the past.”