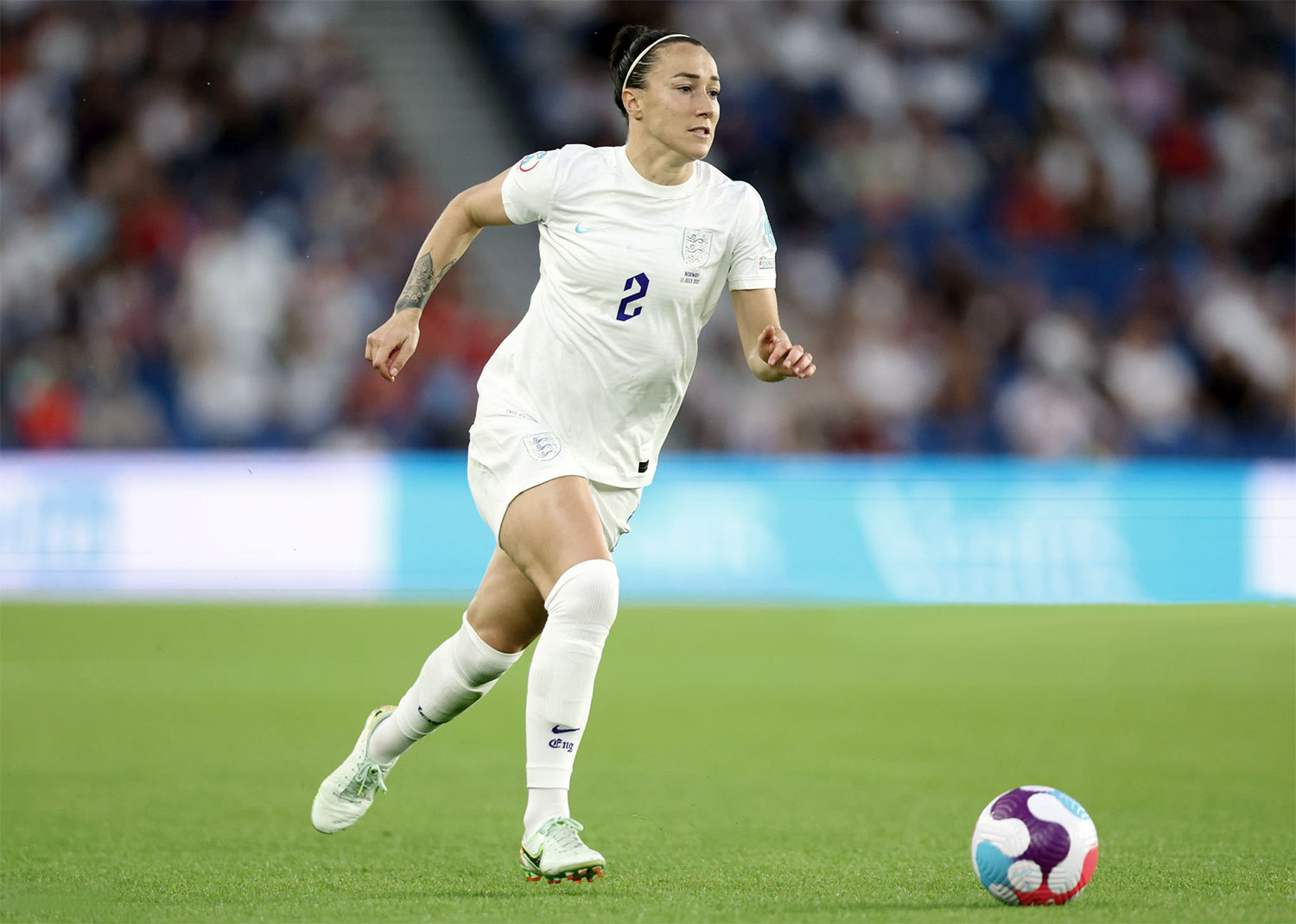 Lucy Bronze Aiming to Cast Aside Past Semifinal Heartbreaks

Richard Laverty·
EnglandEuros
·July 23, 2022·7 min read
Share
But I think that World Cup [2019] probably taught me more than anything else has, that even when you’re at your best, things can always go wrong.Lucy Bronze

“I think the majority of the players watched the game last night,” said Lucy Bronze, speaking to the media on Saturday afternoon, of the Sweden versus Belgium game the evening before.

Linda Sembrant’s stoppage time winner ensured it will be World Cup bronze medalists and Olympic silver medalists Sweden who stand in the way of the Lionesses and a first major final, on home soil nonetheless, on Tuesday night at Sheffield United’s Bramall Lane.

“We’ve watched as many games as we can throughout the tournament anyway. I think Sweden probably haven’t looked their strongest but we all know that they’re the highest ranked team left.

“It’s a team we’ve come up against a lot in tournaments and I think anything can happen on the day. They showed what winning teams do and that’s find a way to win, find a way to score a goal and get through. We know to expect everything, we’re expecting Sweden to come out all guns blazing and have their best performance against us, because they’ve got just as much to play for as we do.”

One advantage for England is Bronze and her teammates have had 48 hours extra to recover from their grueling extra-time victory against Spain on Wednesday night.

They’re also facing a Sweden side currently affected by COVID-19, with Hanna Glas, Jonna Andersson, and Emma Kullberg all missing the Belgium game, although Glas has now tested negative and returned to training.

While that’s not to say England is guaranteed of success on Tuesday and beyond, things have gone smoothly for the Lionesses so far, and Bronze and other senior players who experienced heartbreak at this stage of the last three major tournaments may be forgiven for thinking they deserve that bit of good fortune this time around.

Whether it be Laura Bassett’s own goal, Fara Williams’ underhit backpass, or Steph Houghton’s missed penalty, the semifinals haven’t been kind to England over the past seven years, with Bronze playing in all three aforementioned matches.

“I think in previous semifinals we’ve had other things to deal with,” she recalled. “Whether that was players missing games through injuries or suspensions or what have you, it kind of shook the team a little bit. I know that all three I’ve played in we’ve had to make changes going in that I don’t think managers would have wanted to have made.

“Touch wood, at the minute everything is going the way it should and obviously everybody finished the game fine. I know Keira [Walsh] came off with a cramp, we’ve only finished with one yellow card for a small bit of time wasting. Those kind of things seem to be going our way this tournament, which is probably a little bit different.”

While the 2015 freak own goal may rank highest on the list of Lionesses heartbreaks over the past three tournaments, it is still the most recent in 2019 that sticks with the future FC Barcelona right-back.

With England a late penalty away from taking both defending and future world champions United States to extra time and an extra half an hour to reach a first final, Bronze herself was in the form of her life, winning everything domestically in France with Lyon, as well as an array of individual awards.

“2019 was one of my best years,” said Bronze. “Not only in an England shirt, but just in general. Every time I was on the pitch, I felt like I couldn’t do much wrong. To kind of be on that high and to be at the top of my game, to be one of the best players in the world and have that dream of winning the World Cup.

“I was playing in France, which was a country that I was living in at the time, playing in the stadium I lived right next door to. It was kind of what dreams are made of. It probably hit me a lot harder than others because I guess when you’re in the best form of your life, that’s when you just feel like this is your time kind of thing.”

Regarding how she has taken those experiences forward, Bronze added: “But I think that World Cup probably taught me more than anything else has, that even when you’re at your best, things can always go wrong. It’s probably why I’m a lot more cool, calm, and collected now, because I’ve been at those very high heights and still been knocked down. It’s something I learned a lot from. I try and share with the girls and the players I’m playing with now.”

While that first semifinal heartbreak seven years ago was a tournament that saw Bronze burst onto the international scene with goals in both England’s second round and quarterfinal wins, time moves quickly in football and after turning 30 last year, Bronze is now one of the most experienced players in the squad.

With an array of young players in Sarina Wiegman’s squad, nine of who are experiencing their first tournament in England, Bronze admitted she has taken on a differing role within camp now she is one of the older players in the squad, especially ahead of what will be one of the biggest games of some players careers.

“I think I’ve very much taken that role up in the team,” she said. “The one who is kind of cool, calm, and collected in situations, whether it’s conceding goals, winning goals, winning games, apart from when Georgia [Stanway] scored the other night probably!

“I think I’ve been in the situation many times in semifinals, in big moments and in big competitions, probably the most in this team. I’m well aware of that. But equally, I know that you’ve got to enjoy these moments because you never know when the next one’s going to come. But I’ve definitely taken up the role of the cool person in the team, somehow.”

The task now is to breach the semifinal curse that has haunted them over the past seven years, and ensure Wembley will be covered in white next Sunday, whoever it is who may await them in the final.

While there is undoubtedly two tough tests to come should England hope to lift their first major trophy in front of their own fans, Bronze believes at least reaching their first target of the final four means they can now focus solely on what’s ahead this week.

“We can really compartmentalize the next stages. There’s still two more games, but I think even if we do well in this next game, we win this next game and that’s a huge step, a big step that this England team hasn’t taken very often, obviously since 2009 and I think Jill [Scott] is probably the only one who can remember that far back!

“I think we just have to focus on that game, we know it’s obviously a big deal if the host nation can win the tournament and be in the final, but we already know that reaching the semifinal and what we’ve done in the run-up to this tournament has had a huge impact already on the nation and on women’s football in this country. We already deemed what we’re doing has been quite successful in inspiring the nation, but as footballers we’re very much focused on the games that are ahead.”

Bronze also knows whatever happens, Tuesday will be a tough test, with Sweden’s side filled with tons of star players from around the European domestic game, and plenty of strength in depth, a trait they share with England.

After coming up against future club teammate Mariona Caldentey against Spain, Bronze will likely face up to another future teammate on Tuesday in the shape of Fridolina Rolfö, a player who garnered criticism from Arsenal head coach Jonas Eidevall for her performance against Belgium.

But despite that, Bronze knows what to expect from the forward and is fully expecting another tough individual battle on Tuesday night.

“I think she’s a great player,” Bronze said. “I know that people are saying she’s not maybe firing at her best at the tournament so Far, but I think a lot of people are forgetting she’s been playing left back largely at Barcelona and while she was playing left back I think she scored or assisted over 15 goals throughout the season.

“I do know my stats and I do know a lot about her, probably more than some of the people watching the tournament. I think maybe it’s been a little bit harder to adapt back into that left wing position for her. She’s going to be a threat in both attack and defense, which is not always the nicest — wingers to play against when they actually know how to defend properly. She’s a player I’ve played against many times, when we were at Lyon and Wolfsburg, we kind of had a little battle a few times. I’m excited to play against her and then also play with her in a couple of weeks time as well.”

For a player who has been named the best in the world in the past and has won every major domestic honor in both England and France, as well as multiple Champions League medals, Bronze’s trophy cabinet is only missing a title with the national team.

While she’s looking forward to a new challenge and no doubt more success with a dominant Barcelona side in Spain, Bronze admitted her biggest motivation now is success with her country.

“I think a lot of people ask what my motivation still is when I’m playing because obviously I’ve won a lot of trophies both in a team and individually. England’s always been my biggest focus and my entire career I’ve wanted to lift a trophy for England. It’s a huge opportunity I know to tick that box off and that’s very much on my list of things to tick off, lifting the trophy for England.”