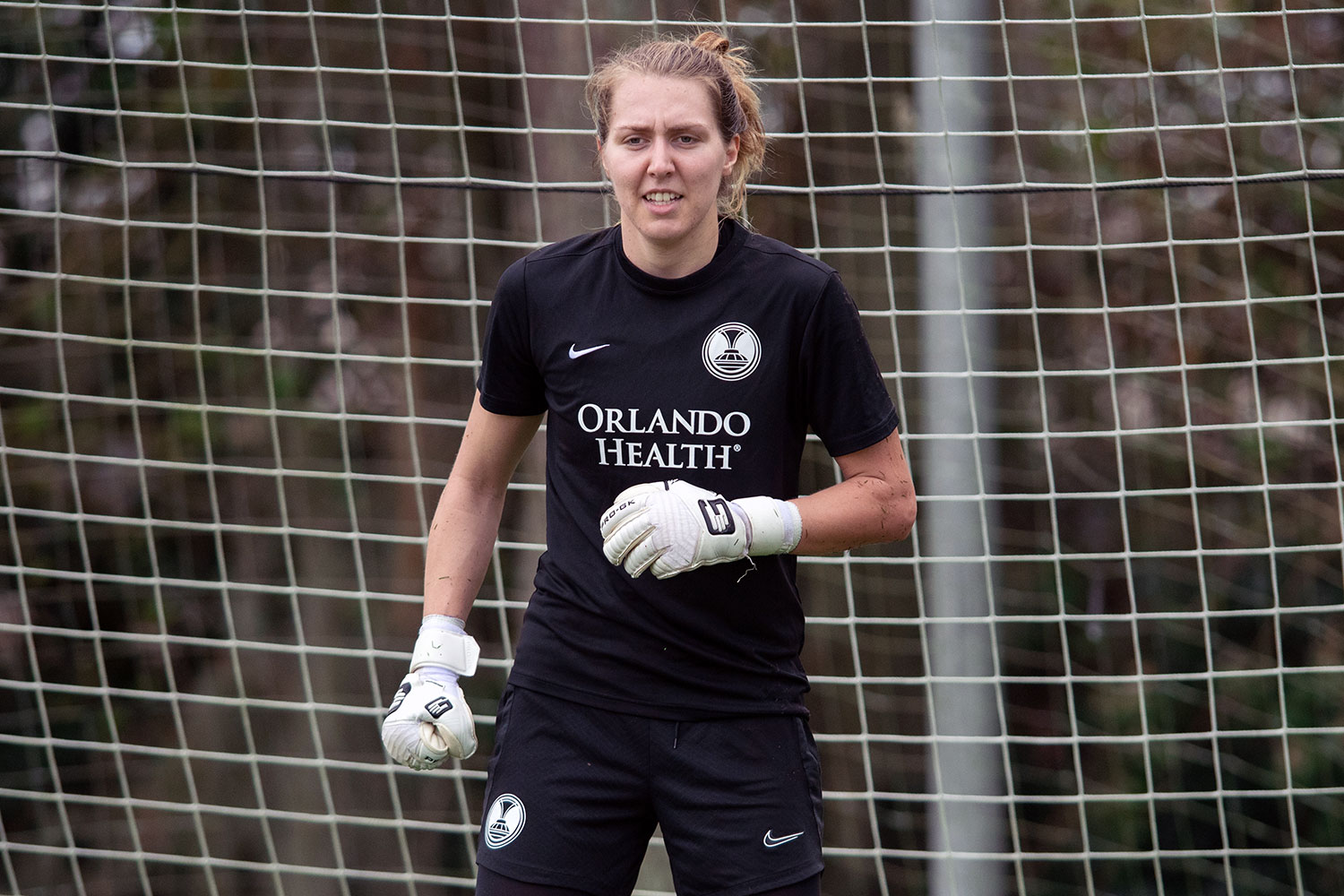 Richard Laverty·
NWSLNWSL Challenge CupOrlando Pride
·March 18, 2022·7 min read
Share
“I’m not just coming to enjoy the lifestyle and sit on the beach. I want to compete with Erin and the other goalkeepers, but enjoying football is big for me because it’s not going to last forever.”Anna Moorhouse
There’s unlikely too many people at Orlando Pride who have heard of the English northwest town goalkeeper Anna Moorhouse calls home.

Seven miles outside Manchester, Oldham to Orlando is certainly not a journey too many have made over the years, whether for work or otherwise, but the state of Florida is where the former Arsenal, Doncaster Rovers Belles, and more recently, Bordeaux, shot-stopper finds herself heading into a new National Women’s Soccer League campaign.

It will be the 26-year-old’s first taste of the NWSL when the Pride kicks-off their Challenge Cup campaign this weekend, but she won’t forget her rather more humble beginnings.

“I definitely appreciate the steps I’ve been on,” she said from Orlando’s team base, just a week after arriving in one of America’s most well-known locations. “I guess not many people here have been to Oldham. People ask where I’m from and I go, ‘Oldham,’ and then I have to go, ‘It’s near Manchester,’ then they get it. I’m never going to forget where I come from.”

Moorhouse’s dry wit is evident throughout our interview as the goalkeeper comes to the back end of a whirlwind couple of months since deciding to leave Bordeaux in January.

After leaving Arsenal to join up with her former head coach Pedro Losa in France, Moorhouse enjoyed a solid first season before a combination of injury and a change of coach meant opportunities, and enjoyment, were few and far between.

Moorhouse admits perhaps it was meant to be that Orlando came calling at an opportune moment in which she was considering doing something different, though moving across the world for someone who describes herself as “shy” shows she was very much ready for a new challenge.

“I was just getting a bit frustrated with the style of play we’d changed to,” she said. “It wasn’t really what I wanted and then the opportunity came up to come here.

“It was something I’d always wanted to try. The experience in France was really good, I think it brought out another side to my game and it brought me out of my shell a little bit. I wasn’t necessarily unhappy, but I wanted to try it and I felt this was the right time to come, at the start of a new season.”

Did fate intervene to get her out of a difficult position?

“I feel like if I hadn’t have gotten that injury and still been playing regularly then I wouldn’t have been looking for a new challenge or to move to a different league,” Moorhouse added, “because I would have just stayed in France.

“There were good challenges there and I wouldn’t necessarily have looked for that other challenge, but everything kind of just happened together and it worked out that way.

She had no time to dwell after finally gaining her visa after a month-long wait back home in England.

After arriving just last week, the goalkeeper has been straight into training with her new teammates, as well as a new life away from the pitch ahead of the Challenge Cup this weekend.

“I’ve kind of just been waiting for this really,” she admitted. “I waited a month and then when my visa arrived it was like ‘Get on a plane, let’s go.’ It was kind of crazy, the turnaround from just chilling at home in England to getting on a plane. I got my visa on the Tuesday and flew out on the Wednesday.

“The team had a game on the Saturday, so I trained Friday, I didn’t really feel like I’ve had a month off. It feels like I’ve gone straight into it. It’s difficult learning all the new names and how people play, but it’s been pretty good so far, I’m getting there.”

Out of the Comfort Zone

Not many English players fly the flag abroad, but Moorhouse is now part of a growing number, particularly in the United States, where she’s been joined during the offseason by fellow goalkeeper Carly Telford at San Diego Wave FC, three young college draftees, and last season Manchester City defender Gemma Bonner, to add to the long-term NWSL stars such as Rachel Daly and Jodie Taylor.

But Moorhouse isn’t new to the international scene having spent 18 months at Bordeaux where she helped the team qualify for the Champions League behind runaway leaders Paris Saint-Germain and Olympic Lyon last season.

With Losa at the helm and the lure of European football, Moorhouse took the initial step to push herself out of her comfort zone and move away from where she’d always called home.

“I felt like… not that I was done in England, but I’d been to quite a few teams and I felt like I wasn’t going to get into a team like Arsenal again and I really wanted to play Champions League.

“It wasn’t really a risk to go to France because I knew Pedro, I knew his style of play, and I knew I wanted the Champions League and that they were capable of it. In my first season, we challenged PSG and Lyon, we pushed them, two of the best teams in the world at that point.”

Moorhouse is also not unfamiliar to playing with the kind of global superstars she has been introduced to at Orlando, having played with some of the top names in Europe during her time at Arsenal, as well as Jamaica sensation Khadija Shaw with Bordeaux.

She will, though, have to deal with coming up against one of the greatest of all time in Marta every day in training, but Moorhouse admits that not only will the challenge make her more determined, as is her character, but her experiences from Arsenal have prepared her better for viewing them as teammates, as equals, rather than superstars.

“A little bit [surreal], when you think about it,” she laughed. “That’s Marta. That’s Sydney Leroux. These are players where I’ve grown up and they have been the top stars in their countries. I had it at Arsenal with Heather O’Reilly. I was younger then and was like, ‘Oh my god, that’s Heather O’Reilly, I’m going to get coffee with Heather O’Reilly!’

“I appreciate who they are and what they’ve done but for me now, they’re just another player in the most respectful way possible. You can’t be going, ‘Oh my god, that’s Marta’. It has to be more ‘She’s not scoring on me.’ It makes me a little bit more determined and I’ll take that into the league if I play, whoever it is. ‘You’re not scoring.’ that’s the kind of person I am, I want to kind of annoy you a little bit. But training has been great, Marta and the other big-name players don’t just bring what they bring on the pitch, it’s what they bring off the pitch too.”

Moorhouse can also take solace in that she is not the only new face, particularly in the goalkeeping department.
Working alongside experienced Canadian Erin McLeod, the pair have also been joined by former Brazil international Aline as their new goalkeeper coach after the 32-year-old ended her playing career in Spain.

“The training sessions we’ve had have been amazing,” she said. “It’s like something I’ve never really had before, a goalkeeper that has been so senior to me and it’s nice to learn from Erin and how she sees the game.

“Aline’s just come out of playing professionally and it’s just a culmination of all these different experiences. Different cultures too with Erin being Canadian, Aline Brazilian and me English.”

Moorhouse does have some familiar faces, and accents, on the roster too. Manchester United defender Amy Turner joined the Pride midway through last season and the pair have been joined over the winter by Wales international Angharad James, while former Premier League defender Seb Hines has arrived as a coach.

“They’ve come over here like me and it’s nice to hear that accent! It’s such a small world. One of the coaches here, his uncle is my little brother’s goalkeeper coach, which is weird. It’s so weird, how little the world is.”

Despite some familiarities and some big names to get used to, Moorhouse is certainly not coming to Orlando just for some sea and sun and a trip to the theme parks, admitting she’s not a “big fan” of Disney anyway, although she’s keen to check out The Wizarding World of Harry Potter.

At 26, Moorhouse is entering her peak years and about to get her first taste of one of the biggest leagues in the women’s game, and she is determined to make the most of her opportunity.

“When I went to France, I wanted to settle in, play as many games as possible, and just enjoy it, and it’s the same here.

“I’m not just coming to enjoy the lifestyle and sit on the beach. I want to compete with Erin and the other goalkeepers, but enjoying football is big for me because it’s not going to last forever.”

She has made provisions to make herself feel slightly more at home by bringing a few home comforts along to make the transition easier as she is thrust straight into the deep end ahead of the team’s Challenge Cup opener this weekend.

“I wouldn’t say I miss anything, except my family and my dogs. In France, I missed my mum’s cooking a lot, but here you have so many food options — don’t shout at me, mum, for that comment! I still miss my mum’s cooking.

“I planned for the tea and biscuits and actually brought a pack of biscuits and some Yorkshire tea over – so I was prepared for that.”
Does that mean a tea party round at the Moorhouse residence once she’s had some more time to settle in?

“I don’t think I have enough biscuits for that.”