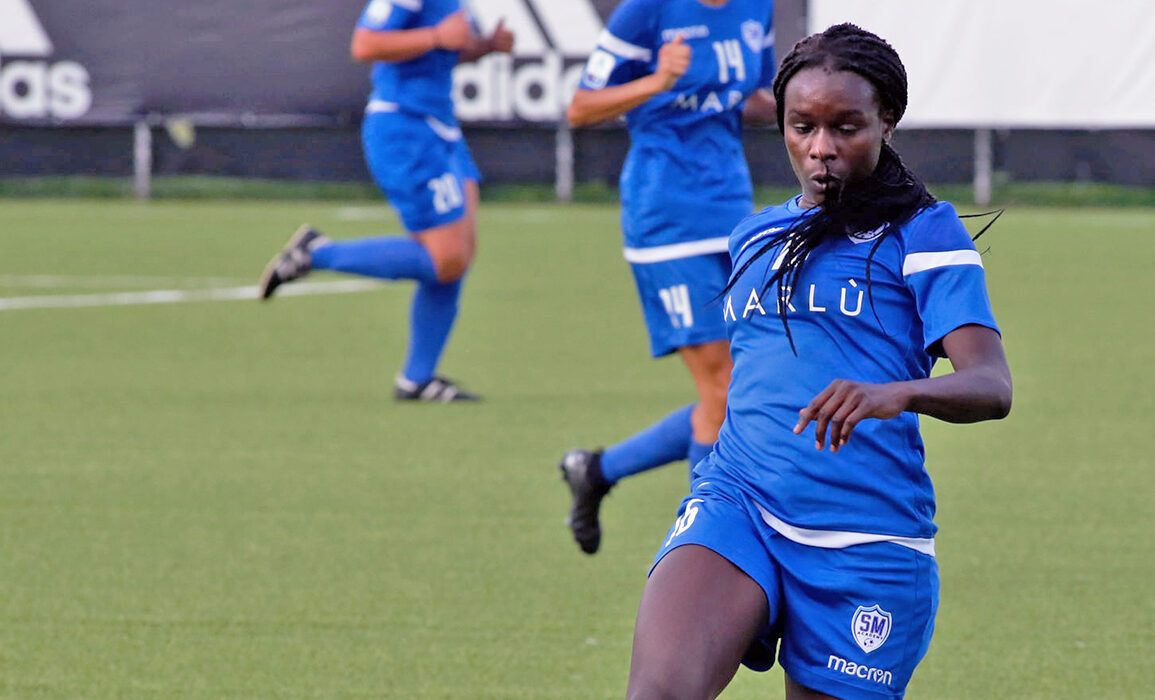 Richard Laverty·
Italy
·October 18, 2020·8 min read
Share
We left before it got really bad — like, the bodies being driven through the city on military style trucks.Karin Muya
There will be few footballers around the world who will be able to say they were exempt from the chaos and tragedy the COVID-19 pandemic has brought upon both sport and society. With the pandemic still ongoing and despite football in many countries moving toward some kind of normality, the normal everybody knew no longer exists, with games still predominantly played in empty stadiums and a whole range of new protocols players and staff must live and work by.

Italy was one of the worst hit countries during the initial stages of the pandemic, with thousands across the country dying day after day as the virus rampaged its way through the European country. In Bergamo, in the northern Lombardy area, the city was hit worse than any other place on earth. At the time, the area was home to former Chelsea and England youth team forward Karin Muya, who had only joined local then Serie A side Orobica a month before the pandemic swept through Bergamo.

Muya’s career began at current FA Women’s Super League champions Chelsea, where she became an England youth team player and did eventually make her league debut, scoring in a 2–3 defeat to Everton in 2013 as a teenager.

With Chelsea not the force they are today and options for young players also not what they are today, Muya was always fairly well set that the next stage of her career would be outside of England, and she hasn’t returned home for football reasons since.

“I’d been at Chelsea since I was about 10, but I’d always remembered growing up I was pretty adamant that one day I was going to America. I didn’t necessarily think I wanted to be a professional footballer, I just liked it and enjoyed it.

“I think I was about 17, playing for England youth teams and it was around the time Emma Hayes came in. A lot of it then was about how then was the time to stay in England because the league was going professional, but I wanted that experience and I always knew I wanted to go to university too.”

She added, “I can see now for younger players in England why some choose to stay, but at that time I wanted to go America, even if just for the experience. I didn’t have any specific expectations other than to just have a great experience. It was a cultural adjustment. You don’t think America is that different to England, but it is, in lifestyle and in football, the way they train even. Americans take things much more seriously, their approach to competition and it’s a unique experience. The resources you have access to as a student athlete is amazing.”

Muya settled on Notre Dame as her university, where she would follow in the footsteps of the likes of Candace Chapman and Melissa Tancredi.

Her time though was a difficult one, Muya picked up two separate season-ending injuries, meaning she would end up spending five years in the U.S.

In her sophomore year, she tore her meniscus before a ligament dislocation in her foot during her final year came at the worst possible time with the National Women’s Super League draft around the corner.

“I wasn’t drafted, but I was invited by clubs to do preseason,” Muya recalled. “In February I’d already signed in France. It’s hard for a foreign player to get drafted unless you are very good or very in-demand. It’s hard to trial too because you need health insurance sorted and a lot of other things, it was easier for me to just play in France.

After a brief period in France, it was January this year when Muya made the move to Orobica, a spell which would be all too brief.

One Step Ahead of the Virus

With just six matches behind her after arriving from France, Muya was forced to flee the area back home to England via a return to the United States where she studied at Notre Dame University, leaving the majority of her belongings back in her now empty apartment in the region.

“When I arrived in January, things were fine,” recalled Muya, now 25. “Then about mid-February is when we started to experience outbreaks, especially in the Lombardy region.

“I was staying in Bergamo and I remember we had from the second week of February a few outbreaks, one game canceled, then training was canceled, then before we knew it, gyms and restaurants and shopping malls were closed.”

Muya, along with the club’s other foreign players, quickly realized the best place for them was not Bergamo as soon the Italian city became the epicenter of the COVID-19 pandemic, and the former Chelsea player booked a holiday to see friends back in the U.S. before returning to London and her family.

“I’d already scheduled it in because it was the international break, so I decided to visit some friends in Chicago. I booked a flight from Milan thinking it might be fine to come back afterwards, but once I was there I had to extend my stay because Milan-Malpensa airport closed down, so I just flew to London from Chicago.

“I went home around mid-March. I kind of left a lot of things there [in Bergamo] because it was unexpected. I think it was around the start of March Orobica sort of officially started to tell the foreign players we should be starting to look to go home. I heard a few horror stories of players being stuck; by mid-March Milan had completely shut down, even the local airport in Bergamo had shut down.”

By the end of March, just Bergamo itself had seen more than 2,000 deaths from COVID-19, with thousands of more infections around the region.

The city became the worst hit location worldwide, more so even than China where the outbreak first occurred.

“We left before it got really bad — like, the bodies being driven through the city on military style trucks,” said Muya.

“We were in our unique little bubble. We just trained and that was it. I had a teammate who was a nursing assistant who worked in a hospital. She worked shifts back to back, going home, sleeping a couple of hours, and then straight back.

“You heard stories of ambulances just driving around to find who could be admitted into hospital and who would be left alone to die because hospitals were so overwhelmed, they had to prioritize. They were getting helicopters to take people to other hospitals in other regions because there was no room left. I think almost everyone knew someone who had died or been badly affected.

“A week after I got home was when the death toll started to get exposed. But you could feel the fear when I was still there. I barely left my apartment except to just train.”

Muya didn’t end up returning after her holiday, certainly not immediately. After departing Italy and the majority of her belongings, she didn’t return until the middle of July, more than four months after she had left.

Even before the Serie A season was prematurely curtailed with six games remaining, Orobica’s fate had been sealed. No wins and a single draw in 16 games left them almost certain to be relegated to Serie B, which was confirmed once the season was canceled.

They were replaced by fledgling club San Marino Academy, based in the micro-state that shares its name. With a population of just 33,000 — just a quarter of the population of Bergamo — the rise of its women’s team has been remarkable, with back-to-back promotions seeing the team go from Serie C to Serie B to Serie A in just two years.

As part of the team’s recruitment drive to step up to the top division, Muya was one of several players recruited, although the forward admits she wasn’t completely set on moving, and even considered walking away from the game completely.

“With everything that’s happened and being completely honest, football hasn’t gone maybe as I would have hoped and maybe it was partly me suffering, going back to America, and maybe not planning as much,” reflected Muya.

“I was definitely just considering stopping after Orobica, just moving on, looking for a full-time job permanently because I have a degree in business. I did an internship a few years ago and I am interested in being a business analyst. I was networking during lockdown but I wanted to give myself one more year, because my season with Orobica was basically a month and a half.”

She added, “San Marino just presented itself and I thought, ‘Oh, this is a great opportunity.’ I’d looked at maybe playing second tier in England and finding a job alongside it, but I researched San Marino and it’s very organized and the way San Marino is, the government has a lot of resources available to the women.

“We train at the main stadium, the facilities are great, we have a nice gym and changing rooms, it’s treated like a professional club. We have a goalkeeping coach, a head coach, an assistant coach, a fitness coach, a kit man, two physios — it’s more professional than I experienced at Orobica. We’ve brought players from Fiorentina, Sassuolo, a Japanese player, and another player coming from Napoli.”

Since we spoke, San Marino has added another English player in the shape of former Arsenal and West Ham United defender Vyan Sampson, but life in Serie A hasn’t been easy.

A 0–10 defeat to Empoli on the opening day was far from an ideal start, but results have been more respectable since. A 0–5 defeat against AC Milan, but only a 0–2 defeat away at champions Juventus, before a 1–0 win against Florentia has pulled them off the bottom of the table and out of the relegation zone, with Muya playing in four of the team’s five games so far.

At 25, she is still enjoying the game and enjoying her time in the small area San Marino provides, but she definitely has one eye on the future amidst what she believes is an “inevitable second wave” of the COVID-19 pandemic.

“I’m kind of going with the flow,” she admitted. “I want to go into some corporate job, something with a business function, but I’m playing it by ear. Maybe I could merge my experience of football, who knows? I do think I want to work in America, I think it has some awesome opportunities and I’m excited about the future. I don’t have a specific plan, I think if you do it never really turns out the way you’d expect.

“If I’m fortunate enough to play for a few more years, but the second I lose the motivation or the passion, I’ll move on to other things because I’m excited for that next part of my life.”