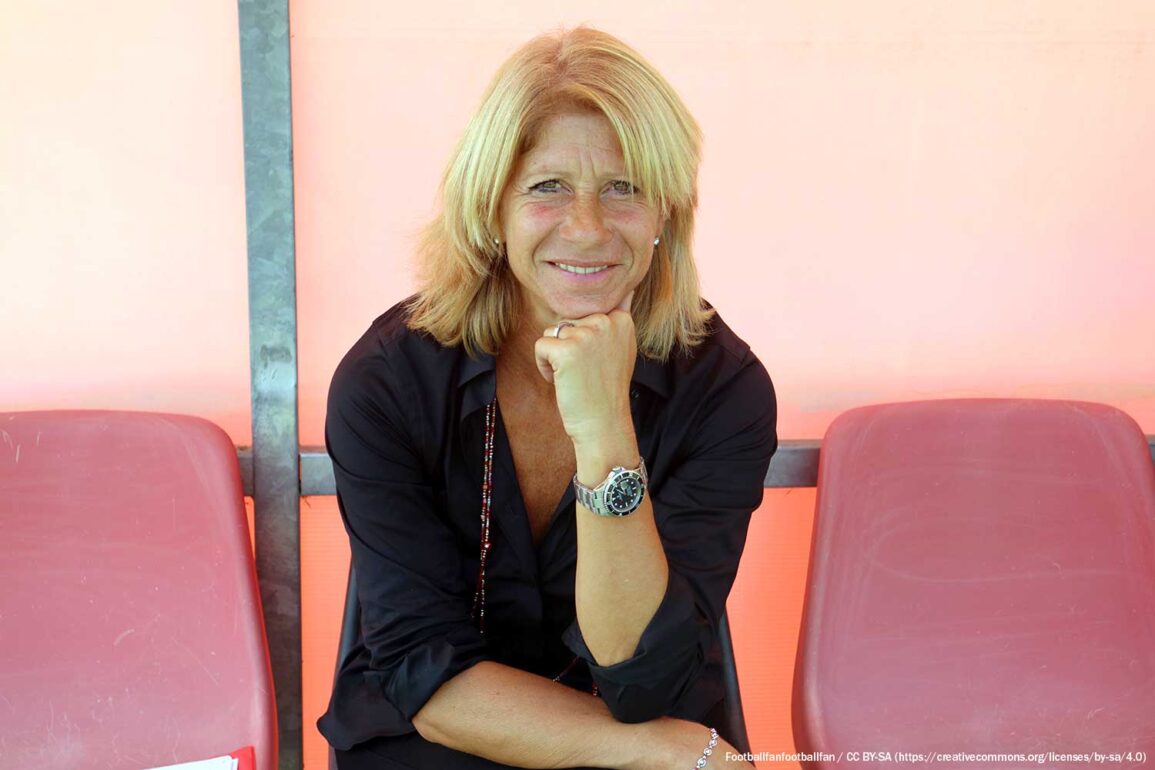 Carolina Morace Recalls the Day She Scored Four at Wembley

Richard Laverty·
Italy
·August 27, 2020·5 min read
Share
When you think of football, you think of Wembley.Carolina Morace
[dropcap]F[/dropcap]or a period of the 2000s, the FA Women’s Community Shield was a regular occasion to look forward to. As in the men’s game, it was a curtain-raiser to a new campaign which saw league winners face off against FA Cup holders.

As women’s football continued to grow, games were staged between 2000 and 2008 — excluding 2007 due to the Women’s World Cup — at grounds such as Fulham’s Craven Cottage, now home of Chelsea Women, Kingsmeadow, and most recently at Macclesfield’s 6,000-capacity Moss Rose.

The competition’s return in 2020 finds a prominent stage for itself alongside the men’s match this Saturday at Wembley Stadium, the first time the national stadium will host the women’s match.

As league champions Chelsea face 2019 FA Cup winners Manchester City, it’s a showpiece occasion that should be an opportunity to show off a whole host of exciting new signings to fans, but the continued COVID-19 pandemic means those fans will sadly not be able to attend to see the likes of Sam Mewis and Jessie Fleming on show.

It’s not the first time a women’s match has preceded a men’s match in England. A range of exhibition matches during the late 20th and early 21st centuries took place for keen early-arriving fans, but it’s the first time both Shield games will take place back-to-back.

While most doubleheaders featured two women’s club teams squaring off before a men’s match, back in 1990 the occasion did see the rare appearance of the Lionesses playing immediately before the Community Shield (or Charity Shield as it was known at the time).

Shortly before Sir Alex Ferguson and Kenny Dalglish faced off in the final Charity Shield as Manchester United took on Liverpool in front of 66,558 supporters, 30,000 of them got to watch an England side take on Italy earlier in the day.

It was an England side that included big names such as future Lioness head coach Hope Powell, Marieanne Spacey, and scorer-on-the-day Kerry Davis, but it was a forward on the Italian side who stole both the show and a place in the history books.

Off the back of a season in which her 38 goals for Reggiana saw them win the Italian league, Morace was on the crest of a wave already when she received the surprise call to inform her the Italian federation had accepted an offer to play at Wembley ahead of the Charity Shield.

“I remember everything, because at that time when the coach called the players, we were on holiday!” recalled Morace, who went on to score 105 goals in 150 caps and manage several national teams, including her own.

“It was in August. The coach just maybe a few days before the match, he called us and I was in Sardinia. I used to go with a physical program from my trainer, so I was pretty fit!

“He told us, ‘I know this match wasn’t in the program, but it’s so important because we are playing at Wembley.’ He explained why it was so important but we didn’t need to know because who doesn’t know Wembley? That was the most important stadium in the world, the temple of football.”

With a hastily assembled squad, the Italians headed for London where they would walk out between the historic old twin towers to face the Lionesses on August 18.

Neither side was at the level they would be today, and if not for Morace, it would likely have been quite a close encounter.

The 26-year-old scored two goals prior to halftime to put her side in command before making it a hat trick in the second half. A historic fourth goal followed late as England pushed to get back into the match in front of their home support.

“Before the match I went onto the pitch,” said Morace. “The coach came over and said, ‘If you score here, you can say you are a real football player.’ I remember this and when I scored one I thought, ‘Oh wow, I scored at Wembley,’ then I scored two, and by the fourth goal, England were all in our half of the field and I got the ball in my half, I just ran and I remember the whole stadium was loud, they were all clapping me even though I was Italian!

“After the match, the England captain came into our dressing room with a ball signed by all the players. In Italy, we didn’t do that so we didn’t know what she was doing. I had to ask her and somebody explained when you score three goals that is the tradition. It was one of the most important things I did in my career.”

Morace doesn’t have the ball anymore, but she knows it’s in a safe place after offering it to the Italian Museum of Football in Florence.

[dropcap]W[/dropcap]ith women’s football not anywhere near as much in the public eye as it is today, Morace has no physical memories of the day she describes as one of the most important in her career, but she remembers the day herself as vividly as ever, bar a few minor details, like the England goal scorer.

When I remind her it was Davis, she says, “Ah, I know her! She played for Lazio for a little bit, a very good player!”

Beyond that though, it’s a day that sticks in her memory.

“There are no pictures and no videos, nothing,” she said. “I don’t have anything. At that time, when we played, we didn’t ever see things back. Now, everyone has a phone in their pocket! I think back then too if our coach saw us taking pictures before the match he would have been angry!

“But I remember Wembley. When you think of football, you think of Wembley. I remember standing outside and I was surprised because it didn’t look like a football stadium, you couldn’t understand it was a stadium until you are inside.”

For a player at the time playing in Italy, who didn’t speak English and playing in a sport as a whole which at the time received minimal media coverage, Morace wasn’t aware of the stature she had and respect she commanded within the game until after she hung up her boots.

“I understood a bit more when I started learning English. I remember meeting Hope Powell and Heidi Store who played for Norway, they used to tell me, ‘We were worried about playing Italy because of you,’ but I didn’t know that when I was playing. I just played for my country and that was that.”