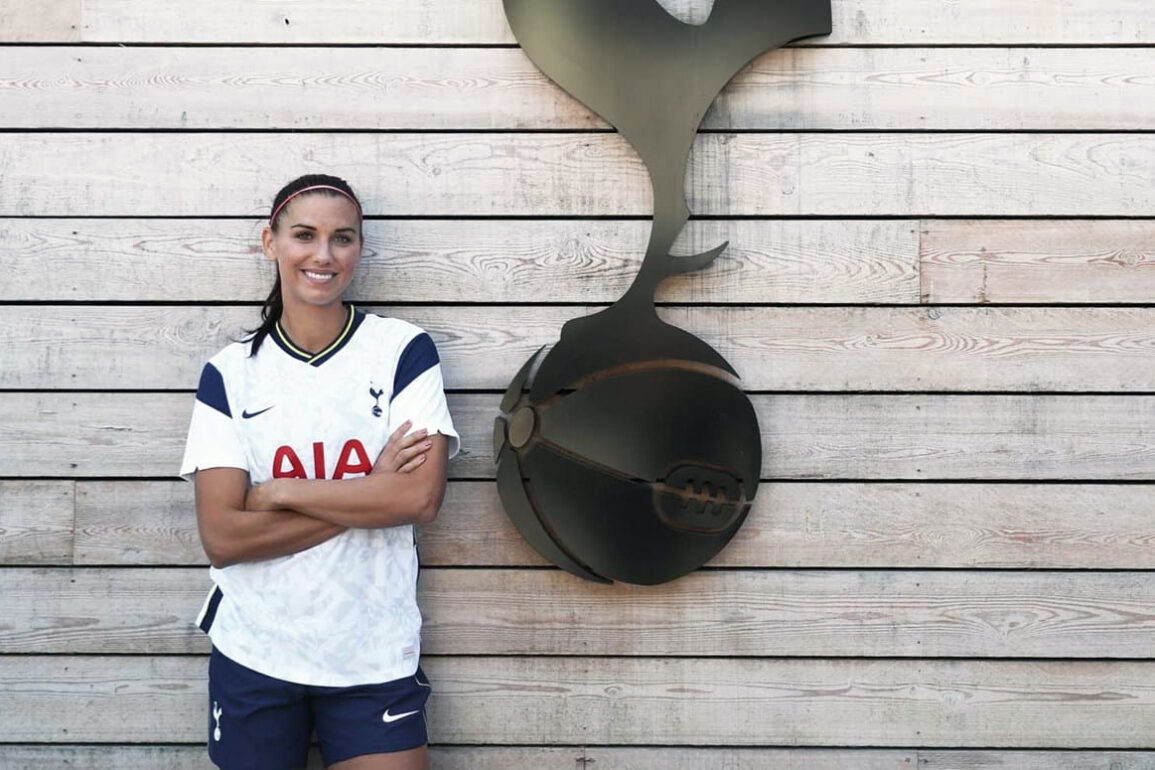 Richard Laverty·
FA Women's Super LeagueUSWNT
·October 2, 2020·7 min read
Share
Alex Morgan says she chose to spend the next few months of her career with FA Women’s Super League side Tottenham Hotspur because of the growth of the league, but she was also impressed by her pre-World Cup visit to the team’s training facilities during a U.S. Women’s National Team training camp. Morgan’s move sparked surprise given Tottenham finished in mid-table last season and has only been in the FA WSL for a year, but it’s another marker of the progress the side has made under long-term coaches Karen Hills and Juan Carlos Amoros.

With fellow Orlando Pride players Alanna Kennedy and Shelina Zadorsky joining beforehand, everything was in place for Morgan to make a smooth transition ahead of a potential debut against Manchester City this weekend.

“I joined Spurs because I feel like the FA WSL has done such a great job bringing over such great talent and competing to be one of the best leagues in the world,” said the striker, who scored six goals at last summer’s World Cup. “I also feel like in the U.S. right now with the pandemic, I didn’t feel very comfortable with the playing situation and the uncertainty in the NWSL.

“After pregnancy, I knew I needed as many games as possible moving into 2021 with the Olympics and I wanted to make sure I put myself in the best position possible to compete for that. I thought that was the best option for me. Joining Spurs was important for me, it’s such a great organization and I had the opportunity to come here before the World Cup last year and see the facilities and the progress the women’s team has made.”

It means another new challenge for a player who is now 31 and has achieved all their is to achieve with her national team. In the last five years alone, Morgan became one of the faces of the new National Women’s Soccer League franchise in Orlando, as well as moving to France where she won the UEFA Champions League with Olympique Lyon.

Morgan’s move to Tottenham is just the latest in a string of eye-catching moves, but one Morgan admitted she didn’t necessarily see coming after giving birth to her first child earlier this year.

“It’s pretty exciting for me because I thought after having my daughter I wouldn’t experience playing internationally again. You look at Orlando Pride and being there for five years, all of the clubs you’ve talked about, the Sounders, Lyon, they’ve been so well-established for so long and it gave me an opportunity to train and play with some of the best players in the world.

“This is a journey for me now to try and help grow this club, bring my experience, my leadership, and my style of play. The football here is quite different to the NWSL so it gives me a new challenge as well and I’ve never been one to hide from challenges. Even at my age now, I feel I have room to grow as a player. I’m in a different part of my life now, having my daughter, being away from my husband, but I’m excited, it’s something new and it came spontaneously and I think that creates even more excitement around it.”

Morgan’s move to Tottenham came as late in the transfer window as was probably possible, so much so that news of the move didn’t break until after the English deadline had passed.

Morgan admitted she wasn’t 100 percent certain on whether she wanted to make the move after adding another member to her family so recently, but knew that for her career and wanting to get back into playing games, a move abroad was likely the best decision she could have made at this stage in her life and career.

“I started looking at other options because I wanted to get in with a team to do team training as fast as possible,” she said. “I knew with Orlando only playing up to four games and not knowing if players would feel comfortable traveling — if I’d even feel comfortable traveling — all of these questions started to arise and I realized even if I played those games I’d be finished in October and maybe not playing regular football until February or March next year.”

She added, “I spoke to my husband at length and we started looking at other options. It wasn’t always my intention to play for another club but I wanted to give myself the best chance to get back playing matches, to feel like myself again, and I knew I needed consistent games for that. I think we started looking Sunday before the transfer window shut and by Tuesday I had a contract drafted up by Spurs. I was 50–50, I wasn’t sure if I was ready to pull my family apart from each other, but I decided to sign later that week. I went back, packed my bags, and came here the following Tuesday, it all happened very quickly.”

With two of her Pride teammates already in London with Tottenham, Morgan admitted she did seek out their advice but the move happened so quickly she didn’t get a lot of time to speak in-depth with anyone about the move.

“Because the decision was so last-minute and down to the wire, I mostly talked to Alanna and Shelina and once I signed, Heather actually text me saying I was crazy, but she respected it,” she laughed. “I appreciated that text, she gave me some tips for London and asked me about the club because she was here a few years ago and has seen the growth since she left here.”

FA WSL the Place to Be

While the U.S. still reigns supreme on an international stage, the COVID-19 pandemic has thrown up a scenario that would have felt more than unlikely at the start of the year with so many household names now flocking to the FA WSL.

Aside from Morgan, four of her USWNT teammates have also come to the league, as well as the likes of Sam Kerr and Pernille Harder, while others such as Rachel Daly and Jess Fishlock have returned after lengthy spells away.

Morgan already has previous experience in Europe thanks to her spell with Lyon, but even though Tottenham won’t be at the level the dominant French giants are, Morgan admitted the competitiveness of the FA WSL as the European game grows was a big attraction for her.

“I think something I’ve really noticed with the FA WSL is the growth of every individual club to create something which is competitive across the board. Not all the resources are put into the top two clubs like I saw in France, and there are things put in place to create that competitiveness.

“The FA WSL has been a popular topic, always gaining popularity over the last few years. You’re not seeing just Man City, Chelsea, and Arsenal, but teams like Man United and Spurs coming into the top division, teams like Reading doing really well, there’s a lot of clubs putting a lot of resources in and that’s what I respect a lot about this league.”

After not making her debut in the FA Cup quarterfinal defeat to Arsenal last week, Morgan could be set for a first appearance when Tottenham travels to Manchester City in the league this Sunday.

With Manchester United soon to follow, the 31-year-old could face Rose Lavelle, Sam Mewis, Tobin Heath, and Christen Press in her opening games in English football, and she’s looking forward to seeing how all of them get on during their respective periods playing in England and the FA WSL.

“Honestly, it’s pretty incredible to have so many U.S. players here, although most landed in Manchester, I’m not sure how I didn’t get that memo!” she joked. “Actually, London is the place to be! I’m so happy for them and their choices; every player had to make a choice for themselves. We all have different reasons behind it and I’m really excited to see all the girls up in Manchester and how they do.”

While Morgan is hoping to make it onto the pitch at some point come Sunday, she’s realistic that her time in England, however short, is going to be a marathon rather than a sprint.

After hardly playing competitive football in the last year and not even being able to train while giving birth to her daughter, Morgan is going to have to work her way back gradually to full fitness.

When she is on the pitch, though, her job will be to bring goals to an ever-growing Spurs side and drag them closer to the more established FA WSL teams, although she did admit the FA WSL won’t be getting a repeat rendition of a certain celebration.

“You won’t be seeing the tea celebration!” she laughed. “I told my teammates they can do it and one of the girls did after scoring a penalty in training!

“I’m hopeful of getting on the pitch this weekend but we’re taking it day by day. We have to look at how long I’ve been out and how long it will take me to get back to full fitness. We have a flexible plan and I’ve had quite a few meetings with our physio staff and the head coach, but nobody wants to see me in a game more than myself because it’s been around a year now since I’ve last competed on the field!”