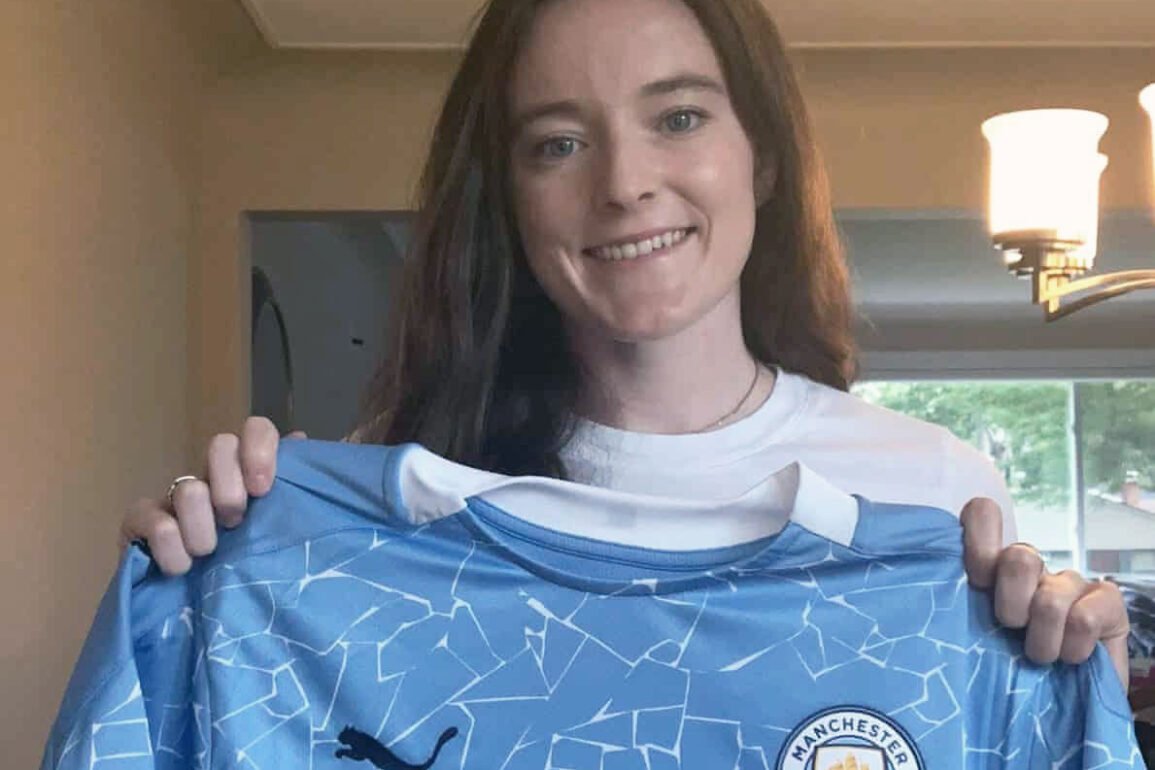 Rose Lavelle on Her Move to Manchester City

Richard Laverty·
FA Women's Super League
·August 19, 2020·5 min read
The club is one of the best in the world and the resources they put into both the men’s and women’s side is definitely something which drew me there. There’s a lot of support, a good environment, and something I felt I needed and something I feel will help me grow. I’m going to experience this huge culture where people live and breathe soccer so I’m really excited for that.Rose Lavelle
[dropcap]R[/dropcap]ose Lavelle says it “felt like the right time” to make the move overseas as growing uncertainty in the United States around the COVID-19 pandemic meant the National Women’s Soccer League schedule was tightened to the one-month NWSL Challenge Cup in July.

Lavelle, who was traded from the Washington Spirit to OL Reign before her move across the pond to Manchester City and joins fellow U.S. midfielder Sam Mewis, said on Wednesday the timing was right for her to join the 2016 FA Women’s Super League champions.

“After the tournament [NWSL Challenge Cup], I kind of wanted to see what was going on with the NWSL and all the uncertainty,” said Lavelle. “I knew at some point I wanted to go overseas and given everything going on over here, it felt like the right time to go.”

Speaking of the trade that was arranged with her move away from the league in mind, Lavelle added, “I don’t know when I’ll be back in the NWSL, but I hoped at some point when I did it would be with the Spirit, but obviously I know coming overseas without a definitive timeline of when I’ll be back put them in a difficult position.

“I understand from the business side of it why they wanted to trade my rights and it made sense. I had to do the best for me and they had to do the best for them, so Richie [Burke] gave me a call and let me know they were trading my rights to OL Reign. I thanked him for everything, we left it on good terms, and I’ve got nothing but good things to say about the Spirit, but Reign is a great club and whenever I come back, I know I’ll be in good hands.”

Lavelle is understood to have signed a one-year deal with Man City with an option for a second year, a deal similar to the one signed by former North Carolina Courage midfielder Mewis last week.

The 25-year-old will become part of what is fast becoming a formidable City midfield available to new head coach Gareth Taylor, and Lavelle said the attention the women’s team gets at the club is one of the key reasons she was attracted to the move, as well as the opportunity to play in the Champions League.

“The club is one of the best in the world and the resources they put into both the men’s and women’s side is definitely something which drew me there. There’s a lot of support, a good environment, and something I felt I needed and something I feel will help me grow. I’m going to experience this huge culture where people live and breathe soccer so I’m really excited for that.

Lavelle is yet to travel to England, though it is understood she will travel imminently and immediately undergo the necessary quarantine period that teammate Mewis is currently undertaking in Manchester.

It means Lavelle will definitely miss the upcoming Community Shield at Wembley at Chelsea and could miss the opening week of the new FA WSL season depending on how quickly she gets down to business in training, but the midfielder said her discussions with the club have been nothing but positive.

“I’ll be heading over there soon. I’ll have a bit of a quarantine period and then if all goes well, I should be with the team soon. The conversations I’ve had with Gareth have been about how he wants the team to play, how the girls are, and how he saw me falling into that whole equation.

“He was somebody who I felt I could develop under, who I could learn from, and would push me to reach my own potential and get better under.”

Lavelle admitted she also discussed the move with now club teammate Mewis as well as more experienced U.S. midfielder Carli Lloyd, who had a brief loan spell with the club back at the start of 2017 and scored in the FA Cup final against Birmingham City at Wembley.

“Me and Sam were definitely keeping each other in the loop with our decisions,” said Lavelle. “I don’t think it was the deciding factor for either of us that the other was going, but it definitely helps to have a familiar face and not just a familiar face but one of my best friends. To experience this with her is going to be really awesome.

“Carli has had nothing but great things to say about it and I knew talking to her it was going to be a great environment. She raved about it, so I’m excited to experience the FA WSL.”

While she accepts she’s not yet overly familiar with what will soon become her new surroundings, Lavelle admitted she’s excited to experience the culture Manchester has to offer when it comes to football, with two prestigious clubs worldwide calling the city their home, now in both the men’s and women’s games.

“I honestly do not know much about the city, but I know the football culture is amazing, so I’m excited to experience that. I have a lot of exploring to do when I get there! I’m sure I’ll look stuff up as I get a little closer but I have no clue, I’ve just got to learn!”

On her new teammates, Lavelle added, “The midfield is going to be really fun with Keira Walsh, Jill Scott, Caroline Weir, and obviously Sam. I think it’s going to be a really fun training environment, I think they’re going to push me, and I’m looking forward to that.”

[dropcap]A[/dropcap]fter it was confirmed on Tuesday only UEFA nations would hold September training camps, Lavelle may not be heading back to the U.S. as soon as many thought, but she confirmed she would be available for any upcoming camps and games thereafter and reaffirmed that U.S. Soccer was fully supportive of her choice to move to Manchester City.

“I let them know I was thinking about going overseas and they were supportive of me and let me make that decision. It was a case of if I stayed in the NWSL, great, and if I went abroad, great.

“With camps, I’m available when needed. I think Sam said it best when she said if I’m not ready for this challenge then I wouldn’t have signed with Man City. All the conversations have been good, they were willing to work with me on it, and they were really supportive.”