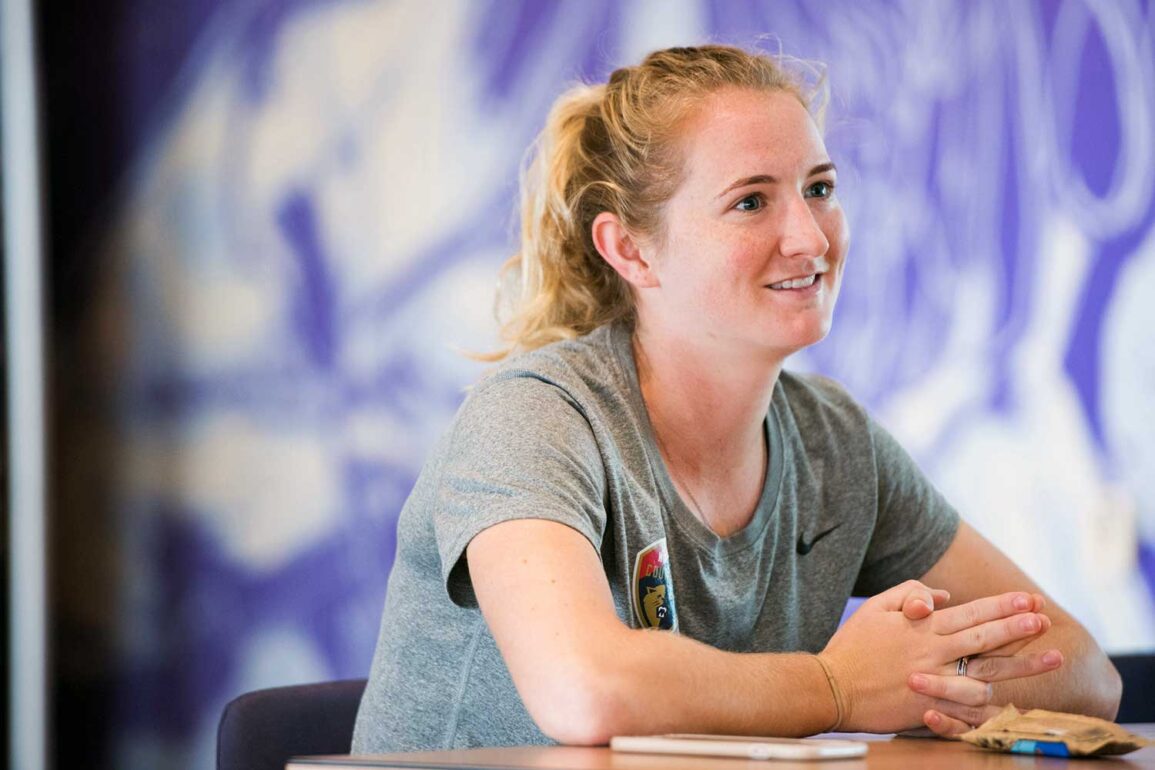 Richard Laverty·
FA Women's Super LeagueNorth Carolina Courage
·August 11, 2020·6 min read
Share
I think when I look back on my career, overseas is something I wanted to do. It will add some depth and experience to my game and Man City is an incredible club.Sam Mewis
[dropcap]S[/dropcap]am Mewis says joining Manchester City is a “great opportunity” and one she didn’t want to turn down after admitting she had the ambition to play overseas at some point during her career.

The U.S. Women’s National Team midfielder was part of both the USA’s 2019 World Cup-winning side and a key part of the North Carolina Courage’s back-to-back National Women’s Soccer League Championships (2018 and 2019).

Mewis’s move to Manchester is her first time playing abroad, and while she has to undergo a routine period of quarantine before she can join her new teammates in training, the 27-year-old is excited about her new challenge.

“Coming to Man City, pandemic or not, is such a great opportunity,” said the midfielder on a live media call on Tuesday afternoon. “I think playing overseas is something which has always interested me. The NWSL Challenge Cup was such a credit to the NWSL but for myself it was a great chance and I didn’t want to pass it up. I can’t speak for anyone else but the NWSL is still a great place to play and I’m sure the FA WSL will be as well.

“I think when I look back on my career, overseas is something I wanted to do. It will add some depth and experience to my game and Man City is an incredible club. I didn’t know I’d get a chance like this, so when I first heard about it my ears definitely perked up. I’ve heard good things from players on my national team who have played here before and I think playing for a club with this reputation is exciting for me.

Mewis’s contact with her new teammates has been reduced to WhatsApp messages but she has had a few phone calls with new Manchester City head coach Gareth Taylor about his plans for where the midfielder will fit into his team when the season starts on September 6.

“I talked to Coach Taylor a couple of times before deciding to come and the way he spoke about what he wants to do here was exciting,” she said. “I felt he could add some depth to my game and we spoke about specifics of that. We’ve spoken on the phone about tactics and what my role might be here. I know the girls really like him, he’s been at Man City a long time, and I think it will be an exciting chance for me to grow and learn.”

Despite a CV that boasts of several domestic titles and a World Cup, Mewis is humble enough to admit she will have to earn her spot in a Man City midfield consisting of three other international regulars in Lionesses duo Keira Walsh and Jill Scott, as well as Scotland’s Caroline Weir.

Mewis, who could make her debut at Wembley at the end of the month should the FA confirm the first Community Shield since 2008 will go ahead between Taylor’s side and FA WSL champions Chelsea, will hope to be involved but accepted she will have to earn the right to play.

“I know a bunch of the midfielders here and they’re so talented. Keira, Jill, and I remember watching Caroline during the World Cup and thinking she was such a great player — so smart and tactical.

“I have to earn my playing time and perform well to make sure I get out there on the field. I hope I can bring my attacking mindset. In America, we play a very aggressive style and while I’ll have to adapt, I hope I can bring that to Manchester City.”

With talk of more NWSL players, national team players or not, seeking short-term moves to Europe amid the current COVID-19 uncertainty, Mewis is the first senior national team player to join the league since Carli Lloyd, Heather O’Reilly, and Crystal Dunn arrived in 2017.

Rumors persist that Mewis’s USWNT teammate Rose Lavelle could also be on her way to Manchester City, but Mewis believes either league will be a strong place for her colleagues to play football over the next few months.

“I can’t speak for anyone else’s situation,” she said. “Some of my teammates have played abroad, but it’s an individual decision depending on where you are in your career and your life. I don’t see there being a huge influx but that’s just my opinion. There could be, the FA WSL is such a great place to play. I feel like both options are great opportunities but I think each individual has to do what’s best for them, so I don’t think there’s a wrong answer.”

On her own situation and decision to swap the U.S. for England, Mewis added, “I think there was a lot of uncertainty for such a long time that it had crossed my mind, but I wasn’t actively seeking anything out. My agent brought this to me over the summer and like I said earlier, my ears perked up because it was Manchester City, an awesome club and I’d heard so many good things about the team and the league.

“It was mutual interest and I’m really fortunate and happy that it worked out because the timing for me did come into it and it’s a key time for me to push and develop as a player. I’m honored Man City were interested and gave me this opportunity and I want to take advantage of it.”

Mewis says she spoke to both North Carolina Courage manager Paul Riley and current U.S. head coach Vlatko Andonovski before moving to Manchester and said she expects to be available for any national team camps should the head coach wish to select her when international football resumes.

On telling her long-standing manager Riley she was leaving the team, Mewis says the Liverpool-born coach was more than supportive of her decision.

“I told Paul about this chance and he was great about it. We have a great relationship and a good understanding, and I knew I had his understanding and support in making a decision that was really good for me at this time. I hope the Courage continues to retain my rights because if I return to the NWSL, I want it to be there. We texted yesterday and he had some suggestions for me for when my quarantine ends, so my relationship with him is still really good.”

Mewis also confirmed that after winning everything there is to win back in the U.S., the opportunity in particular to play Champions League football this season with Man City was a big factor in her choice.

“We had a lot of success with the Courage and we were such a talented team” she admitted. “I’ve always wanted to play overseas and I feel like playing Champions League is on every player’s bucket list. The prospect of winning something I haven’t won before is really exciting. What really drew me here is that desire to keep developing, to keep growing, and to add new depths and skills to my game, and competing for something new is an exciting part of that.”

Someone else Mewis spoke to before heading across the pond was U.S. teammate Becky Sauerbrunn. The Portland Thorns defender spent a short period of time playing in Norway 11 years ago for Røa IL, and Mewis says the advice the center back offered her about adapting to life abroad was more than useful.

“I was talking to Becky and she was telling me about her time in Norway and she said she made herself say yes to everything, and she’s a bit of an introvert. She definitely tried to insert herself into the team, try new things and new adventures, and I appreciated she shared that with me.

“I know Becky and I know her tendencies to be more of an introvert, but it was a reminder I’m not just here for soccer, I’m here for a life experience, so I’ll try to say yes if anyone asks me to do anything!”

[dropcap]I[/dropcap]t turns out Mewis isn’t completely unfamiliar with what she’s getting into, admitting she has watched the Amazon Prime series about the Manchester City’s men’s team, All or Nothing: Manchester City, and that she’s a big fan of one particular City star when asked which English teams she was a fan of ahead of the move.

“I know you guys will roll your eyes but I do like Man City,” she laughed. “I really like Kevin De Bruyne, I’d try to emulate him if I could! I watched the Amazon series a couple of times and I really admire the way the men’s team operates, so I’m excited for their next couple of weeks.

“I don’t know if I’ll be shunned for saying this but Paul is a Liverpool fan and we adopted a bit of that because he was really nice to us when they won! I watched the U.S. teams growing up but watched the Premier League more as I got older and hopefully I can go to a couple of games if it’s safe soon!”