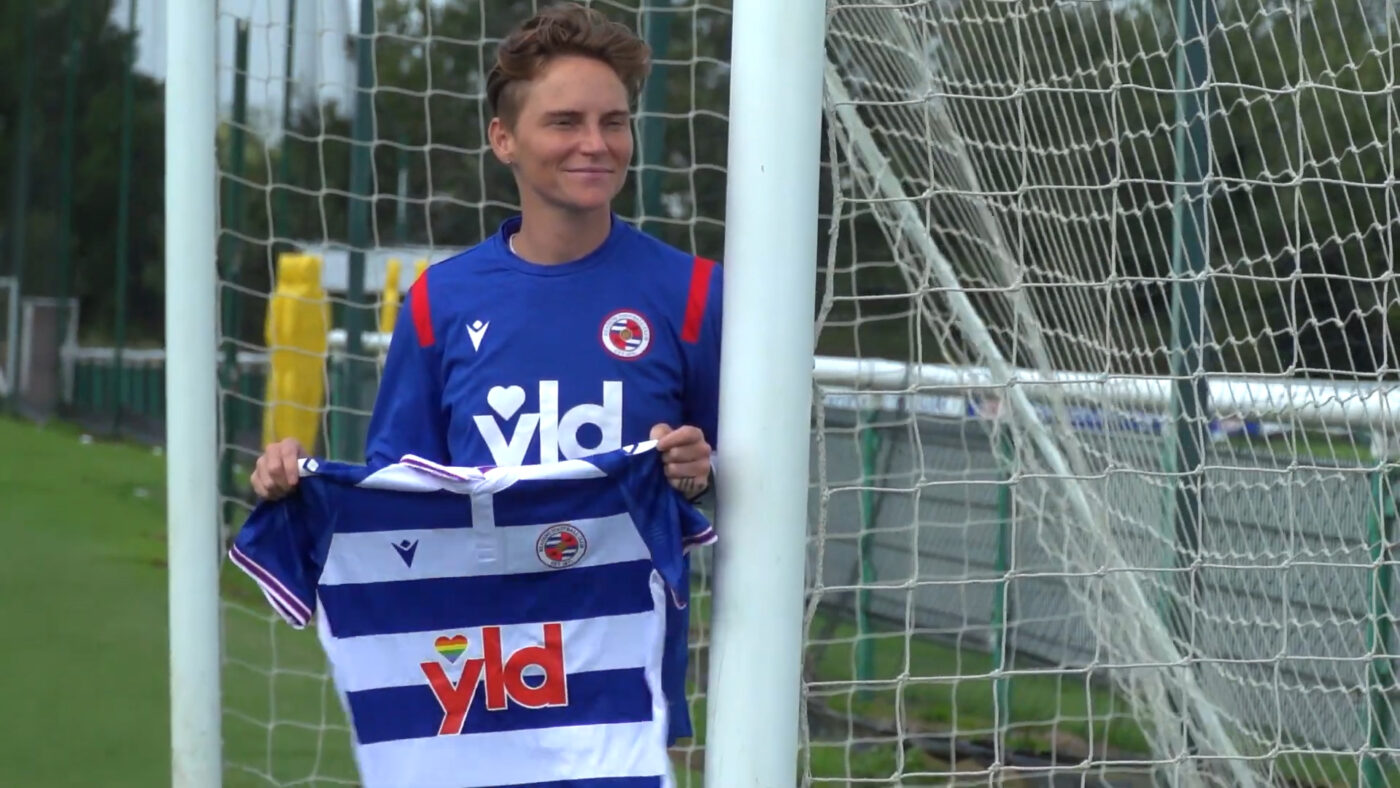 Jess Fishlock on Returning to the FA WSL, Reading, and Team GB

Richard Laverty·
FA Women's Super League
·September 3, 2020·8 min read
Share
It wasn’t whether I should come to England or go to Europe, would the football be better, it was because I wanted to be close to my family.Jess Fishlock
[dropcap]W[/dropcap]ales’ most-capped Jess Fishlock says the current COVID-19 pandemic played a big part in her deciding to return to play in the FA Women’s Super League for the first time in eight years. The 33-year-old left Bristol Academy in 2012 for the then Seattle Reign in the National Women’s Soccer League and has remained with the club, now OL Reign, ever since, with various loan spells at clubs such as Melbourne City, Glasgow City, and Lyon in between.

Fishlock has joined Reading on loan for the new season and will remain in the league until she returns to the United States for the start of preseason ahead of the 2021 NWSL season, and she hasn’t been alone in making the jump across the pond.

“I decided to come home because of everything that’s happened in 2020, the virus, everything,” admitted Fishlock. “I personally found it quite a difficult time to be away from my family. In America, I just didn’t feel right not being near my family during this time. It was something I really struggled with. Making the decision to come back home right now was pretty easy, it wasn’t something I had to weigh up. It wasn’t whether I should come to England or go to Europe, would the football be better, it was because I wanted to be close to my family.”

The Move to Reading

A move to Kelly Chambers’ Reading side provided the perfect incentive to meet Fishlock’s wishes. The club is one of the closest to where Fishlock originally calls home while also providing her with a competitive team, with other additions including former Arsenal duo Danielle Carter and Emma Mitchell, and New Zealand international goalkeeper Erin Nayler.

“It was a pretty easy, straightforward decision about where I wanted to go,” added the midfielder. “I spoke to a few clubs but I kept coming back to Reading in my mind for a few different reasons. One, it’s closer to home, so going home wasn’t going to be a difficult commute. Two, with my Welsh hat on, it’s really nice to play alongside my Welsh teammates again. Three, I like Kelly, I like the coaches, I like the vision, I like where they want to go. Reading have always backed the women’s game as well. You can see with the Madejski, the training facilities, they’ve always done it in a respectful way. They have a lot of respect for women as well.”

Fishlock also admitted the challenge of trying to break into the established top three teams was another reason she joined the club. During her time with Bristol Academy, managed at the time by Mark Sampson, the team always punched well above their weight and after a couple of solid seasons sat comfortably in mid-table. Fishlock believes the club is in a good position.

“I like the challenge of taking the team into the top three. It’s a different sort of challenge to those I’ve usually taken on. I’ve been here for a couple of weeks, I’m really happy with the way the club works, the coaching, the group of players we have. All in all, it’s just kind of fitted really. It fitted what I wanted as a footballer, and what i wanted as a person.

“It’s a very difficult time for everyone with all the restrictions and the protocols, so it’s not the way they would normally do things, but the sessions they put on are brilliant, their response to the restrictions has been really good. The training facilities, the medical facilities, are just at a different level. I didn’t know really what to expect, especially with COVID-19, but I’ve been really, really impressed.”

Fishlock believes it is “touch wood” as to whether she’ll be fit and ready for this weekend’s opening game against Arsenal after coming back from a long-term injury in the NWSL Challenge Cup and having to quarantine for two weeks before she could join her new team mates for training.

If she does, she could come up against former teammate and close friend Steph Catley, as well as her former manager at Melbourne City, Joe Montemurro.

With the new season set to kick off with games shown live across BBC Sport and BT Sport, as well as every other game available live on the FA Player, the game has progressed a long way both on and off the pitch since Fishlock’s last match in August 2012.

“It’s so much more professional,” she admitted. “When I was at Bristol, there were four players who were full-time. Now it’s all full time, great facilities, great training grounds. I’m sat here at the Madejski, it’s just beautiful. Everything’s taken strides since I was last here. Everyone’s on a professional contract; we’re training every day, not twice a week. It’s definitely taken strides.

“It still has a way to go but it’s definitely taken strides. To be honest there was never a thought process about coming home before the pandemic. I had two years on my contract, but I was always kind of hoping I’d come home before I finished. I’m not quite there yet! It’s great timing, a great opportunity.”

One thing Fishlock believes still needs to work on is the way the game itself is covered within the media, and hopes with some of the top players in the world now on view in the league this season, people start to speak more about what’s going on on the pitch rather than off it.

“The one thing for me is that I’d like to see is everybody like you guys just talk about the football. That would help take it to the next level. I think we talk too much about is the men’s club is investing in the women or the women’s crowds.

“I’d like to see everyone take the surround sound away and focus on the football. What’s the tactics? Just talk about football. I think that would take the game naturally to the next level. I don’t think we need to pander around anymore, women’s football is a high-level product and I think we need to focus on that far more than than the other stuff. I think that time has gone.”

As someone who has sampled both the NWSL and FA WSL, Fishlock is well positioned to make a fair comparison between the two, with the NWSL always largely favored as the more competitive league, but COVID-19 may well swing the balance.

With the likes of Mewis and Lavelle at Manchester City and Chelsea breaking the world transfer fee to sign Pernille Harder this week, Fishlock believes the pandemic has worked in the FA WSL’s favor.

“Wait and see how this season goes, but the WSL now has an unbelievable opportunity just because of the way 2020 has panned out. There’s players here now who probably wouldn’t have been here had the situation been normal. I think this season is going to be pretty special. Seeing people like Rose play here at club level will be pretty special. City, Chelsea, look great; Reading. we look great. It’s exciting, it’s really exciting for WSL.

“It’s bridging that gap massively. But before you can say that, you’ve got to see how it works on the field. Just because you’ve got all these fantastic players here doesn’t necessarily mean it’s going to be great. The players might not fit and the product might be terrible. But what I would say is that I think it will be very exciting. Hopefully we do perform and the football will be spectacular. It’s a different world from when I was at Bristol.

“I’ve said from day one the WSL lacks tempo and it lacks competitiveness, but I think right now that probably goes out the window. I don’t think you can say that any more. What you would hope is that when the season kicks off is that this season is definitely the most competitive we’ve had. That it will be so much more exciting and really push teams to a new level or a level they didn’t really realize they had in them — because that’s what happens when you have competitive games week in week out, you raise your game. That’s what we want.”

[dropcap]I[/dropcap]f the COVID-19 pandemic has aided the FA WSL, it’s also thrown Fishlock a lifeline with the 2020 Tokyo Olympics postponed to 2021. Coming off the back of an ACL injury, Fishlock likely had little to no chance of making the Team GB squad, but with a full season ahead of her primarily playing in the English domestic league, it could offer the Welsh midfielder an unforeseen opportunity, but for now she’s just looking forward to being back on the pitch.

“I think anybody would like to be involved,” she admitted. “In all honesty, I’m just concentrating on playing again. It’s been a long time since I’ve been able to get on the field. I’ve got belief in my ability but my focus right now is just playing, and obviously the Euros with Wales is more important. Would I rather qualify for the Euros? Yes. But I don’t think anybody is thinking about a major tournament’s now; they’re just thinking about playing. It’s been so long, we just want to be playing.”

Fishlock missed out, somewhat surprisingly, when Hope Powell was in charge of the last Team GB side to play the women’s football tournament at the home London Olympics in 2012.

The Welsh midfielder believes it shouldn’t necessarily be someone from the home nations who takes charge, but also thinks Phil Neville’s impending departure will potentially make his choices a little easier should he be confirmed as the Team GB head coach.

“I’ve always said — and maybe this is because of what happened before — it shouldn’t be someone from the home nations because I think there’s a subconscious bias which I totally understand. But Phil’s not going to be the England manager going forward, so maybe he won’t have that pressure with regard to picking the England players. I always thought it would be hard for him to not pick an English player for the Olympics and then say to them, ‘I need you for the Euros.’  It’s a really hard position for anybody to be in. I wouldn’t like to be that coach. I don’t think anybody would like to be in that situation.

“I also think it’s really hard to bring in a third party who just comes in and picks a team, so we have to wait. There’s no constant to any of it really. It’s a really hard thing to ask any national coach to not pick some of their players. I wouldn’t ever want to be in that position at all. It would be fun if it wasn’t anyone from home nations, as there’s a different view of it then. But I’ve said all along there’s no doubt Team GB can win it — it’s just a case of getting the team right.”