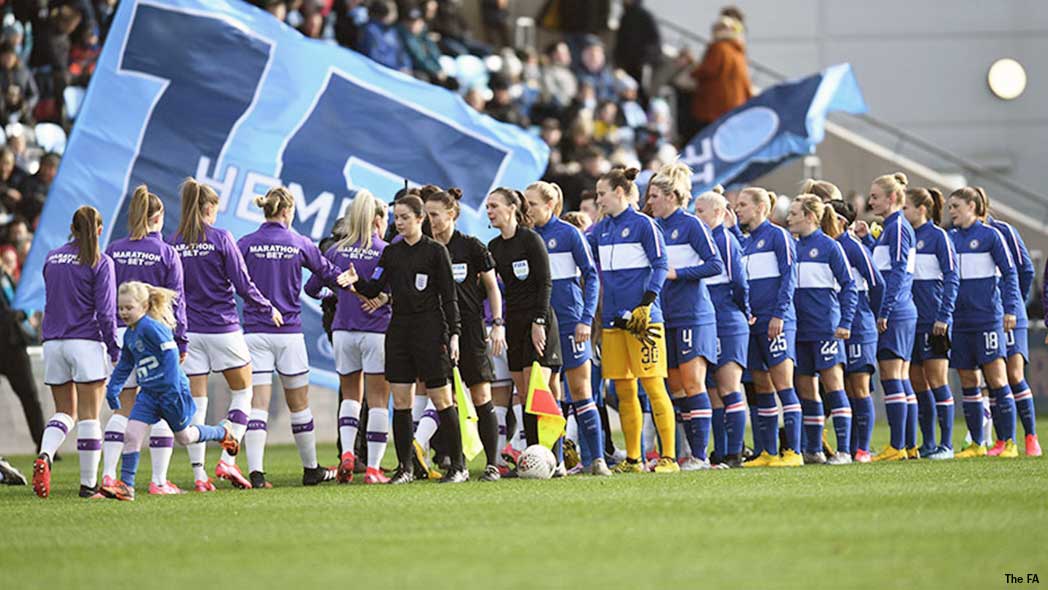 Richard Laverty·
FA Community ShieldFA Women's Super League
·August 28, 2020·5 min read
Share
[dropcap]T[/dropcap]he women’s Community Shield returns after a 12-year absence on Saturday when Manchester City faces off against Chelsea at Wembley Stadium. The showpiece season-opener hasn’t been hosted since Arsenal beat Everton, 1–0, at Macclesfield’s Moss Rose in front of a modest crowd, though a bigger one than will sadly be on show on Saturday.

Like the majority of upcoming games around the world, the match between the nation’s top two sides will be played behind closed doors, but Chelsea manager Emma Hayes believes her players won’t be affected.

“Well, there’s no one here at the training ground so they’ve got daily sessions with nobody listening or watching, there’s not a better prep than that,” said Hayes. “I think this is the third or fourth year with the league professional? You’re starting to see the players become more professional in their approach to it. It’s a job, it’s business, it’s getting yourself ready to go to work every day.

“That’s what I’ve started to see even more of and I’m sure other clubs will say the same: that the players are becoming more and more professional in their preparation for everything. I think that will improve the product even further.”

While the Community Shield is often viewed as an “exhibition match” and there’s no doubt both sides will use the five substitutes available to continue preparing their squad for next weekend’s opening league fixtures, there are several reasons why both will want to win.

Saturday marks Man City’s first competitive fixture since the last time they faced Chelsea, a thrilling 3–3 draw in February which essentially won Chelsea the FA Women’s Super League title given it ended up being the last weekend of games before the COVID-19 pandemic.

Chelsea did play a week later against Arsenal in the Continental Cup final, and they will view Saturday as a chance to reassert their recent authority over City, even if results between the pair have been as close as ever.

City has only lost one of the last six matches between the two and only two of the last 13, but it has been Chelsea who has more regularly ended the season with silverware, especially when it has come to the league title, though City locked out both domestic cups in the 2018–2019 season.

For City, they will look at it as an opportunity to continue their solid record against their rivals, but most of all, new head coach Gareth Taylor will want to show he is up to the task of taking on the best as he prepares for his first competitive match in charge since replacing Nick Cushing.

Taylor played at the old Wembley three times and the current stadium once, and admitted he can’t wait for the occasion.

“It means everything,” he said. “I was so excited when I heard about this game, particularly starting a new job hearing one of your first games will be at Wembley Stadium. It’s just amazing for me. I was fortunate to be there as a player. but to lead a team out is really special for me and something I’m really looking forward to.”

Amazingly, this is the first time the two will have met in a “final,” having met in several semifinals in both the Continental Cup and FA Cup over the past six years — eight semifinals to be precise.

Predicting any outcome is difficult given neither has played a match since February, but the squads don’t look too different, with Chelsea adding three players so far and Man City the same, though Rose Lavelle won’t be available.

Lavelle is now in England and is going through the same quarantine period as U.S. Women’s National teammate Sam Mewis did and is expected to be available for the second weekend of the FA Women’s Super League, but Mewis could well be on show at Wembley on Saturday.

City is easier to read given their openness over preseason games, lineups, and results, while Chelsea has been on radio silence when it comes to their preparations so far.

Chelsea’s squad, though, does look bigger than their rivals after the additions of Jessie Fleming, Melanie Leupolz, and Niamh Charles, while City is still waiting on the potential arrivals of Lucy Bronze and Alex Greenwood, has Lavelle unavailable, and defensive duo Aoife Mannion and Megan Campbell still working their way back from long-term injuries.

“Sam is currently just training with the squad,” said Taylor. “She made a small appearance at the weekend in the training match so all being well, hopefully [she will be involved], we’re looking at working with small numbers in the practice games.

“It’s been all hands to the pump a little bit. Caroline [Weir] had a concussion as well so she missed a little part. We have been pulling together so well and everyone is really looking forward to this final game we have before the season starts. There’s nothing outside of the long-termers. Everyone is moving along well and looking good. You hope in preseason that everyone gains a good level of fitness and stays away from any kind of niggles.”

While City’s squad is incomplete, Hayes admitted she was keen to get her business done early to have a settled squad ahead of the new season.

“We identify our targets so early in advance that for us ideally we get the players in for the beginning of preseason, because I want the opportunity to work with them,” she said.

“All of our players that we’ve brought in are ready for both now, and in a few years for Chelsea. The strategic decisions that we take are never short-term. Our preference is always to have long-term thinking in what we do. I’m really happy with how everybody has settled and the quality in training has gone up so much.

“They’re going to make my life even harder because picking a team from week to week is going to be really challenging because there’s going to be a lot of really strong players on the bench. The acceptance of that from the squad is going to be a challenge for me and my staff, but we also have to make sure that we have a strong enough group that can compete for every trophy this season.”

It won’t just be new signings who will offer intrigue. For Chelsea, there is the likely first appearance of Fran Kirby since November last year, while Man City’s thin squad will likely ensure chances for youngsters Jess Park and Esme Morgan, the latter of whom has returned from a loan spell at Everton. The game could also see Karen Bardsley’s first domestic appearance in over a year.

Hayes also turned the tables on her rivals and believes the pressure is on Man City to succeed after the arrivals of Mewis, Lavelle, and forward Chloe Kelly, but also admitted she is happy to see the very best players coming to the league, even if it is a rival.

“Wow. They’ve spent a tremendous amount of money bringing in some unbelievable players and they’ve already been a top team. The way they’ve strengthened off the pitch, I’m sure their fan base will expect really big things from them. I expect that the competition between us will not change, it’s always neck and neck with everything.

“I’m just so excited to see all this top talent come to the U.K. and it will improve all of our players and games will be even closer because of the quality on show. This is what I wanted for the league. This is, for me, a dream scenario that every team is in with a great shout of winning. I’m just excited to watch the games and if I wasn’t coaching in it, I’m sure I’d be paying to come and watch it.”