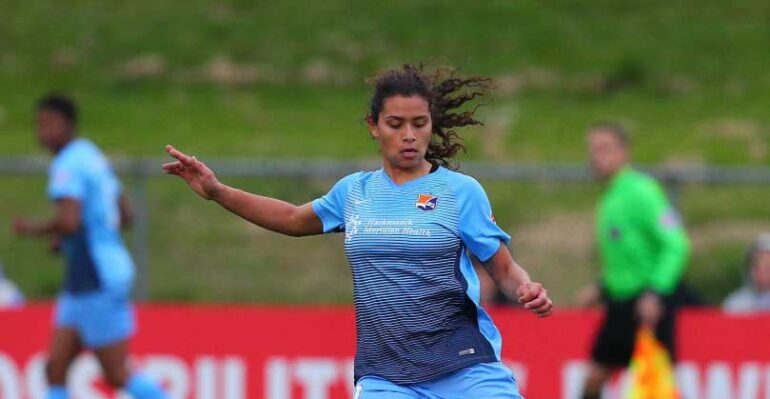 Sky Blue FC defeated the Houston Dash, 2-1, at Yurcak Field in Piscataway, New Jersey, for its second straight win and improved to 3-2-1 in the National Women’s Soccer League (NWSL). This was the second meeting of the teams in the past week after Sky Blue defeated the Dash, 3-1, last week at BBVA Compass Stadium in Houston, Texas. Houston falls to 2-4-0.

Houston started with a new-look backline that included Rachel Daly at left back and Cami Privett in central defense. Andressinha made her first return to the starting lineup since the opening game.

Sky Blue started with a brighter tempo and Nikki Stanton was active early. Houston had opportunity on its right side via Nichelle Prince testing Erin Simon. After last week’s loss, the Dash responded by pressing high and pinning Sky Blue back through the first 15 minutes or so and were much more patient offensively and defensively.

Sky Blue was at its most dangerous when Sam Kerr was creating chances and her teammates pressing when she went forward.

The hosts settled down, though, and put a point on the score board in the 20th minute. It was Kerr who created the chance, earning a foul in the box. Sarah Killion stepped up and converted from the spot to put Sky Blue up, 1-0, and tally her fourth goal of the season; she leagues the league with five goals.

Houston responded in the 40th minute. Kealia Ohai took on the Sky Blue defense on the right side and got to the end line, cut back, and found Andressinha in the middle of the box. Andressinha’s right-footed shot took a deflection off a sliding defender and hit the far post but she followed up on the resulting rebound and poked it home into the back of the net.

The game opened up from the middle of the second half on with both sides looking to break the tie.

Raquel Rodriguez gave Sky Blue the lead in the 84th minute. Second-half substitute Daphne Corboz played the ball into the box off of a free kick where Dash defenders knocked it down. An opportunistic Rodriguez was able to get a shot off that beat goalkeeper Kailen Sheridan near post.

Despite its early success on its right side, the Dash elected to not overload that side, and lacked tempo in its transition. Additionally, Sky Blue gave the Dash space in the middle but the Dash could only generate one dangerous attack down the middle that split Christie Pearce and Mandy Freeman.

Sky Blue will travel to North Carolina for a mid-week game against the league-leading Courage on Wednesday. Houston returns home to host Seattle in the Lifetime NWSL Game of the Week.

Eric LeGrand was the honorary captain for Sky Blue.

Morgan Brian went 81 minutes as she continue to gain match fitness after sitting out with a knee injury.