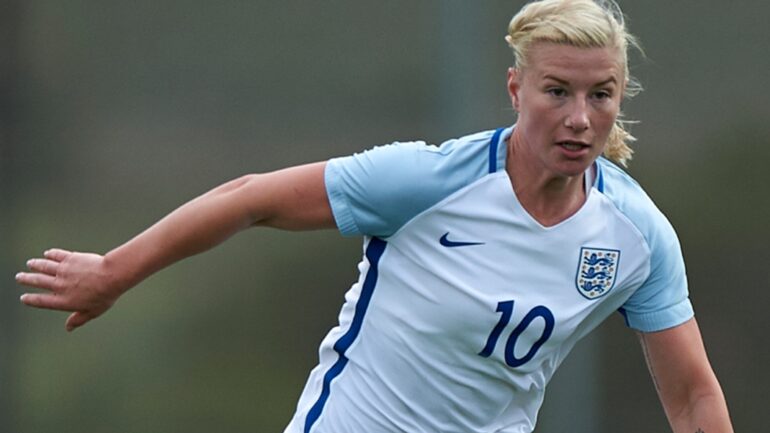 The forward had been in top form for Chelsea last season, ending the campaign as the club’s top scorer but was still to receive a call-up as the World Cup grew closer, a tournament she would miss out on.

The 25-year-old was drafted into a pre-tournament camp along with several other players to gain experience of what life in the senior squad was like, but it wasn’t until last month that she received her first call-up, eventually making her debut in the 3–3 draw against Belgium.

It’s been a bumpy four years since England decided to leave Doncaster Rovers Belles after helping them earn promotion to the FA Women’s Super League, making the big jump from part-time to full-time professional with then champions Chelsea.

“I think the first year and a half at Chelsea I struggled to find my feet a bit,” she admitted. “I moved away from home, everything was different, I went from part-time to full-time, so that was quite a bit of an adaptation. There were some great players in that squad then, especially the forwards, so it was quite difficult. I think I ended up playing wingback for the Spring Series, which I hated, it was a lot of running!”

After a season and a half on the fringes and struggling to earn a regular spot as a striker under Emma Hayes, England was sent on loan to Liverpool ahead of the 2017–2018 season, a decision that kick-started her career and set her on the path to where she is now.

“As much as I didn’t agree with it at the time, it was the right decision for me to go on loan, and going to Liverpool is probably the best thing to happen to me. There was a lot of doubts with how Liverpool was ran and Scott Rogers as the manager, but for me, he helped wonders. He helped me get in that number nine role and really work on my play and I felt like I had a really good season for Liverpool and then managed to kick on even better last season at Chelsea.

“It was a tough journey because in my head any player that gets loaned out you think that your manager doesn’t want you. At Chelsea, no player that got loaned out got brought back so in my head I thought, ‘Okay, they don’t want me anymore.’ But it was changing that mind-set and showing them that I can be the player that they need me to be and, thankfully, I did that. I was really proud of the way I handled it and managed to get back into the Chelsea squad and now I’ve got the nine shirt. It’s been quite a big journey, but I’ve loved every minute of it, with the tears and all.”

It was at Liverpool that “England for England,” chant and all, soon became a thing as Phil Neville took charge of the side after Mark Sampson’s sacking just as her form was hitting its peak for Liverpool.

England scored a brace in the first game Neville watched after taking the job and followed it up with a four-goal haul at home to Yeovil Town, as well as the winning goal that put a fatal dent in Manchester City’s title hopes and effectively sealed the FA WSL for parent club Chelsea.

“My first contact with Phil was actually when I was on loan to Liverpool,” she recalled. “I had a fairly good season there before I got brought back to Chelsea and I had the odd couple of conversations there. I know he’d been to some games I played but that was just minimal contact and then towards the latter end of [the season with] Chelsea.

“I’d say after Christmas when I started scoring some goals the contact was a little more frequent and then obviously I got into the pre-camp before the World Cup to train with the girls, which was really special for me to do that. So it’s been on and off but I wouldn’t be expecting him to be calling me every week. He had a big tournament to prepare for and I guess his priorities was the team, so I completely respected that and then since the World Cup he’s been very hands-on communication-wise and I’m finally here, so it’s been a nice little journey.”

The first person England wanted to tell when she earned her call-up for the friendlies against Belgium and Norway was her mum, Lisa, but as is so often the case in football, news travels fast.

“When I actually found out I was with my teammate so I told her not to say anything, but I rang my mum straightaway and that was it, all the family knew. I was like, ‘Don’t post anything until it goes out.’ You know what parents are like, they get dead eager. But yes straightaway, my mum is always the go to with that one.

“She’s proud. Obviously she’s been on this journey with me ever since I was a kid, coming to every football game. She tries her best to get up and down the country even though she’s crap on motorways. It takes her hours to get to London for Chelsea games. She’s my best friend and she’s my number one fan so she knows everything.”

England jokes her teammates have been quick to “take the mickey” out of her and mimic the “England for England” chant that has become familiar to her, but the chant is no longer needed after she made her long-awaited senior debut last month.

But with the striker in the form of her life and starting the season in spectacular fashion with a long-range winner at Stamford Bridge against Tottenham, England is now looking ahead and targeting an Olympic spot, but she’s realistic about the competition for places, especially in attack.

“It’s going to be difficult, but like I say, all I can do is give him a headache by playing well and performing, it’s his job to pick the squad. It would be pretty awesome if I did, but you can’t really bank on that, so just hope that the season goes well, really.”

England does believe though that the competition for places is “healthy” as she looks to nail down a regular spot in the squad and admits she’s already noticed a difference between club football and international football by training with the squad.

“Training here compared to club level, the standard is so much higher and the expectation from you is greater. That can only push you on and I think if you’re not in this environment to compete and fight then you’ll soon fade out, you’ll get picked off so easily.

“Any sportsperson would know that the competitive edge is something that you have in you and you want to win and you want to fight for it, if you don’t then you’re in the wrong environment.”