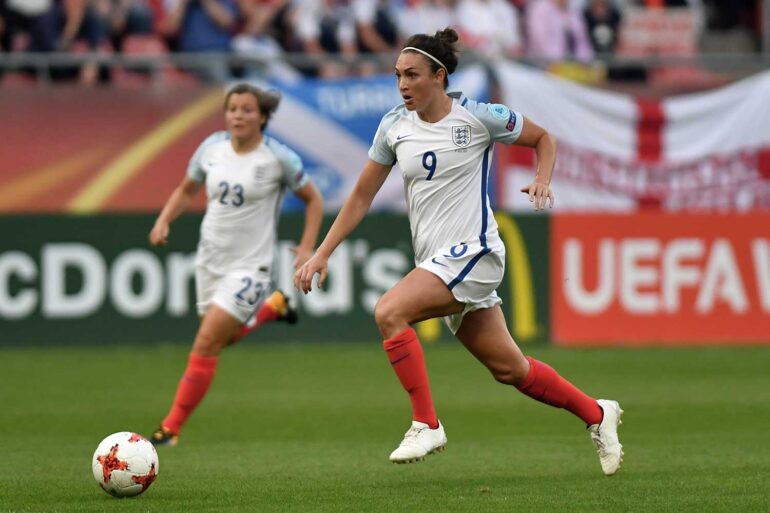 Few got to see the United State’s World Cup-winning celebrations up close more than England forward Jodie Taylor, striker for National Women’s Soccer Leagu side Reign FC alongside the likes of Megan Rapinoe and Allie Long.

While her teammates went on holiday or returned to preseason, Taylor returned to the United States to continue her season with the Reign, ensuring she not only didn’t get much of a break but was also front and center to watch the country that had ended her own World Cup dream celebrate.

“My first home game back they did a ‘homecoming’ as they would call it for all the international players and obviously it was all about the U.S. players because they won, and Megan Rapinoe, so that was a little bit difficult, I’m not going to lie, but great to see my club teammates doing well.

“You see the upside of it,” she added. “There’s been more fans coming to games, more interest, the league itself during the World Cup got an ESPN deal, so it’s nice to be on that side of things, to know that the games are on national TV, more people coming to the games to support. We had sellouts to our games, which is huge, so it’s been good, it has been good over there. It’s coming to crunch time now with the playoffs and it’s all to play for. We snuck in to the top four and we’ve got a good chance of winning like every other team in the top four.”

While Taylor admits it’s been difficult to see the celebrations up close, the 33-year-old says it’s the motivation she needs, even if she and several of the more experienced Lionesses may not get another chance to taste World Cup success.

When asked if it was a positive to be outside of England post-World Cup, Taylor falls on both sides of the argument.

“Yes and no,” she smiled. “It’s hard seeing it in your face every day. They want it — all of the attention and everything they’re getting — so, if anything, it’s more of a motivation probably to say, ‘Right, this is where we need to get to,’ seeing more of the positive side because we’re buzzing [about where the game is going], so it’s not disappointing over there because there’s parades and all sorts. So yeah, maybe it is a little bit easier, but a lot harder in other ways, I guess.”

In other ways, though, going back to the home of the nation that knocked the Lionesses out of the World Cup has been refreshing in a surprising way for Taylor.

While she and her teammates felt England had failed by not winning the World Cup, she admits her club teammates have been complimentary by how close the Lionesses ran the U.S. in July’s semifinal in Lyon.

“They’ve been really respectful,” she admitted. “It’s actually interesting going back because while we’re disappointed we didn’t go as far as we did and not beating the U.S. and not getting the bronze, I then go back to all our teammates from all different countries and they say, ‘You guys are amazing, you really took it to the U.S., we thought you were going to beat them.’

“So, in a way, it was very complimentary. We get put down in our expectations and disappointments whereas, actually, the rest of the world thought that we were really good. It was just nice to hear that.”

Aside from preparing for this week’s international friendlies against Brazil and Portugal, Taylor is now also in the midst of a renaissance in the NWSL, playing a pivotal role in recent weeks in helping her side qualify for the end-of-season playoffs.

Taylor scored in the 86th minute in the vital playoff-clinching match against the Utah Royals before adding to her tally against the Portland Thorns last week, earning her the league’s player of the week award.

With a playoff spot now guaranteed, Taylor admits the league has provided her with a welcome distraction.

“It was a struggle for the first couple of weeks, I’m not going to lie,” she said. “I remember our first game back against Chicago, I was just so out of it, just not ready mentally, physically. To get thrown straight in I was like, ‘I’m not ready for this,’ but quickly after that it was straight back in.

“Your mind-set, it’s just the power of the mind, you’re just getting through. A lot of the girls saying, ‘I can’t believe you’ve gone straight into season, I don’t know how you did it,’ but I think it’s knowing when my offseason is coming up and I’m actually looking forward to that so I think mentally, mind-set-wise, you just get over it and get through it.”

Taylor has regularly gone to Australia’s W-League like many NWSL players during the offseason, although she admits the toll on her body means her decision on a return this year is “to be decided,” with her focus now on remaining fit and fresh ahead of a push to be a part of Phil Neville’s Olympic squad next summer.

That starts with Brazil this weekend, not far from where Taylor won her first cap in Hartlepool, and the striker knows how important it is to keep up her recent good form given she’ll be going into an offseason while most of her teammates are playing regularly in the FA Women’s Super League.

“I must say it’s a bit more difficult now being on a different time schedule to everyone else. It’s offseason whereas everybody else is just starting to get going. I remember the last She Believes, it’s the flip side heading into the beginning of a season when everyone else is flying. That’s difficult, it’s just about making sure you get games and try to find a way to match what everyone else is doing, but at the same time, I do like the summer league.

“That’s probably the challenge now. I think of being on a different time scale to everyone else and it’s just trying to find the best way to fit in with everything.”