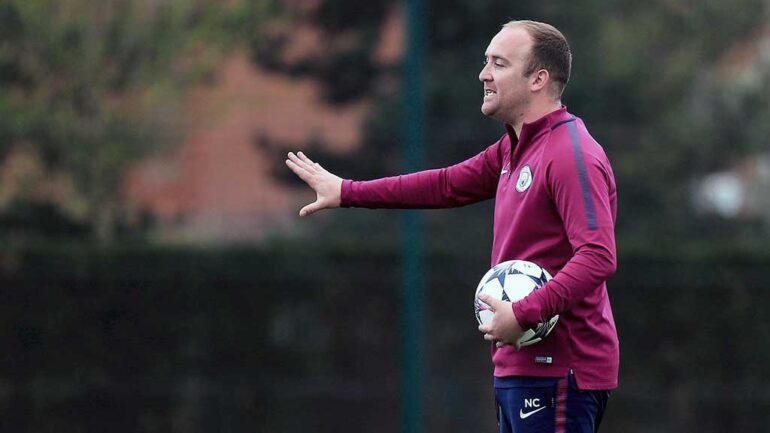 Manchester City Women manager Nick Cushing says the UEFA Women’s Champions League is an “easier game to prepare for” because everyone has the same amount of pressure on them from the off.

As the knockout stage gets underway this week, Cushing knows only too well how quickly the tournament can come to an end after his side exited at this stage last season, losing at home to Spanish champions Atlético Madrid.

City returns to the competition with a perceived easier tie against Swiss side FF Lugano 1976 on Thursday night, and Cushing is looking forward to the challenge that comes with the extra competition.

“As a coach, the Champions League is an easier game to prepare for because they’re a lot more tactical, they’re a lot more structured,” he said ahead of their opening match. “With it being two legs, the games are always a bit more strategic, whereas in the FA WSL, nobody has anything to lose, so teams throw everything they’ve got at us.

“This isn’t to sound arrogant, it’s just how we feel. We tend to come up against everyone’s best performance. Look at Man United, I’m only reading their press — how they were the underdogs, they had nothing to lose, but we had everything to lose — we’re perceived as a team that has to win and we enjoy that pressure. In the Champions League, everybody has the same pressure and the margins are so much finer.”

Recalling his own team’s experience this time last year against Atlético Madrid, Cushing has the perfect example of how fine the margins between success and failure can be when he looks back to 12 months ago.

“Against Atlético last year we were 1–0 up with an away goal and we got knocked out. They scored in the 90th minute and then the first 10 minutes here, and the whole match flipped on its head. We need to embrace that and the strategic part of the game and the players need to embrace it too.”

City reached the semifinals in both of its first two seasons in the competition, but was thwarted on both occasions by Olympique Lyon, with the French side going on to win the trophy three years in a row and they start this season as favorites once again.

Last year’s disappointment has added pressure for Cushing to steer his side into the latter stages, but he says he doesn’t feel “under pressure” to win the competition.

“I don’t feel under pressure to win it, but I feel highly motivated to try,” he said.

“The first objective is to get to quarterfinals and the semifinals because that’s when you’re mixing with the best in Europe. It becomes a real reality that you can win it, but you’re also up against teams like Lyon, Wolfsburg, Barcelona, and Bayern Munich, so it’s not easy.”

Lyon’s success hasn’t stopped them recruiting heavily over the past couple of seasons, with Man City bearing the brunt of their transfer policy.

Lucy Bronze, Izzy Christiansen, and most recently, Nikita Parris, have all left Manchester for Lyon, while other players who featured in their first encounter with the dominant French side have since departed, such as Toni Duggan, Kosovare Asllani, and Carli Lloyd.

Cushing has previously spoken of “succession planning” and doesn’t appear to believe his squad is in a weaker shape than it was before, preferring to focus on the level of talent he still has remaining at the club.

“It would make it harder [to win] if we hadn’t the recruited the likes of Janine [Beckie], Lauren [Hemp], and Ellen [White]. You’re only as good as your recruitment and football has shown me over the last six years that as the women’s game grows, opportunities come up.

He added, “It [the squad] is where I want it to be in the sense of the potential of where we can get to. I watched the game [against Manchester United] back three or four times. I was unhappy on Saturday but I said to the players that we’re unhappy by our own standards because it wasn’t actually that bad, but it was compared to the level we produce.

“We know we can be a lot better, we gave up two chances we don’t want to give away. We were okay in the first, we just weren’t as good as we know we can be. In the second half, we showed how we can dominate teams.

FF Lugano certainly aren’t going to be as well-known to Cushing and his side as Atlético was last year, but should provide a much more stable path through to the next round.

They lost 2–3 at home to Switzerland’s other Champions League entrant — FC Zurich — at the weekend, and Cushing is happy with the research his staff has been able to do on the team, including watching their most recent encounter.

“All the software teams use has the European leagues. Nobody can become anonymous anymore in the Champions League, we’ve got plenty of footage.

“We’ve got their game from the weekend against Zurich which we know is Champions League quality. We don’t tend to talk too much about the opposition because we know if we get things right and prepare to be adaptable and prepare to perform at the level we can, then we’ll be okay.”

Cushing still won’t be able to call on injured trio Karen Bardsley, Lauren Hemp, and Ellen White, but did have more positive news on the latter as well as admitting he’ll have to rotate his squad with another game against Reading in the FA WSL on Sunday.

“Ellen is a really positive one,” he said. “We had a meeting this morning and she’s ahead of schedule, so it’s looking more like three, four weeks than six to eight weeks. Lauren Hemp is coming on, we were disappointed to lose her because she looked so sharp preseason.

“KB is a bit more long-term. We won’t see her anytime soon, it was a difficult injury for her which required surgery on her hamstring. That’s why we brought Karima [Benameur] in because we couldn’t go with one goalkeeper, we probably won’t see her this side of Christmas.”

City flew out to Milan on Wednesday afternoon before heading across the border to Lugano, and will fly back Friday morning after the game before traveling to Reading on Saturday.

It leaves Cushing with just one training session between games to prepare his side, so rotation is inevitable.

“We have to rotate. We can’t rely on 11 players, not just because the games come thick and fast but everyone is training so well. We’ve just done a training session and I honestly couldn’t tell you the 11 to play against Lugano.

“I’ll go back and watch the video and we’ll pick a team based on that and who is in form. You look between form and freshness, we have to find that balance, you all saw our 2017–18 season.”