Janine Beckie’s Manchester City Move: “I Feel This is the Move that Will Take my Game to the Next Level” 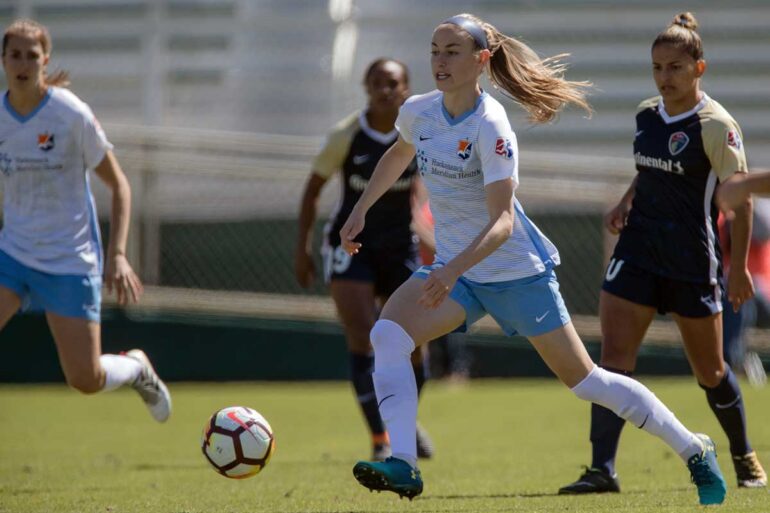 Janine Beckie says the opportunity to join Manchester City was one she couldn’t pass up after an offer came in last week for the former Sky Blue FC forward.

Beckie, 23, has spent the past three years in the National Women’s Soccer League (NWSL) after being drafted by Houston Dash in 2016 but is now set for her first move abroad with Nick Cushing’s side.

“I’d always had my eyes set on coming over to Europe and specifically England,” she told Our Game Magazine. “I’d never really had an opportunity that was catching my eye, nor at the right time in my personal life or my career.

“It’s happened over the course of less than a week so it’s been a real whirlwind. My agent gave me a call and asked me what I thought, I spoke to Nick [Cushing] on the phone, and he told me how interested they were in getting me over there and we started the ball rolling from there.”

The offer came shortly before Beckie was set to travel with Sky Blue for a league game at Orlando Pride last week, a move which meant the Canada international missed the trip, sparking speculation of a move away.

But it wasn’t until late on Wednesday night, together with her agent Alan Naigeon of AV Sports in New York, that Beckie finalized the move to Manchester.

“City had to approach Sky Blue and sort everything with them and that’s tough to get done because a league never wants to lose a player midseason, but they were fantastic and they made it really easy for me. I’m leaving here with good graces. I’ll miss the NWSL, it’s got world-class players and I’m excited to watch the league grow from afar.”

On the race to get everything done before Thursday’s FA WSL transfer deadline, Beckie added: “We got all the papers signed last night.

“I don’t carry a printer and scanner around with me everywhere I go,” she laughed. “I had all these papers that needed signing by multiple parties so it was a whirlwind, but in a short few weeks I’ll be over there and the last few days will all feel worth it.”

Beckie admits she’s never been to Manchester and the deal has been done so quick she is yet to visit her new club, having only ever been to London.

But soon Beckie will embark on her new adventure with the new domestic season starting in little more than a week’s time and the forward is looking forward to the challenge after speaking with Cushing last week.

“It’s not exactly a hidden fact it’s one of the most professionally run clubs in the world. World-class facilities, world-class coaching, world-class players, to any footballer that’s such an ideal situation. They’ve really gained momentum, made it to the Champions League semifinals, and to play in that tournament is a dream of mine.”

Beckie added: “Talking to Nick you get a sense of the kind of guy he is and the kind of coach he is. That was exciting to hear and exciting to hear his plans. They primarily want me to play the number nine role and maybe on the wing from time to time. To be playing for a top team in the Champions League is literally the headline of what I’ve been dreaming of for so long. It really is a dream come true, as clichéd as that sounds, I’m on cloud nine and can’t get wait to get started.”

Beckie’s stats as a striker couldn’t be more different between club and country. In the NWSL she scored just five goals in 53 appearances but she has a goal ratio of almost exactly one goal every two games for Canada, 22 goals in 43 appearances to be exact.

But Beckie isn’t worried about her domestic record and says Manchester City fans can expect plenty from her once she’s on the pitch.

“They can expect a lot speed!” she claimed. “I love to put the ball in the back of the net and I have been known to do that a few times, so hopefully I’ll score some goals and hopefully take this team to potentially a championship.

“I have a unique ability to link players and play in tight spaces and I’d love to think I’m an exciting player to watch. Hopefully, Man City fans get behind us and push us on to what we all dream of.”

But the 23-year-old is relishing the challenge and is realistic about how she’ll have to perform in order to play regularly.

“You can look at it as a challenge or look at it fearfully, but you know you’ll be challenged in a squad like that. I’ve always been a person whose gone towards that, I feel this is the move that will take my game to the next level and challenge me to be better every day, and if I’m not then I’m not on the field, and in my opinion, that’s the way it should be.

“I want to be surrounded by players who have a common goal, who want to challenge each other, and win championships. I’m just excited to be in such a high-class, challenging environment.”

Beckie can also claim to be one of the few Canada internationals to come and play in England, following in the footsteps of midfielder Desiree Scott who spent several seasons in the FA WSL before returning to the United States.

But with fellow stars Ashley Lawrence and Kadeisha Buchanan playing for Paris Saint-Germain and Lyon in France, respectively, Beckie hopes the moves open doors for other Canadian players and offers inspiration to move outside their comfort zones.

“It’s a massive deal to have another Canadian come to Europe,” she admitted. “Kadeisha and Ashley both made history going into the Champions League in France and that’s the level we’ve decided as a group of women we want to perform at.

“Hopefully we are changing the mindset of where Canadians want to go. Not to just stay domestic, you can go overseas, it smashes those insecurities. It opens the minds of the teams, too, to look at more Canadian players because they see how well Kadeisha and Ashley have done.”

[dropcap]F[/dropcap]or now, all Beckie’s attentions to turn to Manchester City and the new FA WSL season. The forward references next year’s World Cup as a motivation in seeking a top-level move but also admits the lure of Champions League football and the possibility of playing at stadiums such as Wembley meant it was an opportunity she couldn’t pass up.

“As a footballer, what comes to your mind is Champions League, those big European names that have become so famous because of the men’s teams but have invested in their women’s team. When you look at NWSL, it’s a fantastic league, it’s very athletic and competitive and very few games that are won by two or more goals.

“But Europe is just so different. It’s football all the time, it’s playing for an FA Cup at Wembley. I’ve watched the men do that so many times on TV and to have that opportunity gives me the chills. I never thought that could be an opportunity for me too growing up. I’m about to turn 24 and this is my reality. It’s a great chance to grow the game for women in Canada, go and see a different country, and what a blessing that is to call this my job.”