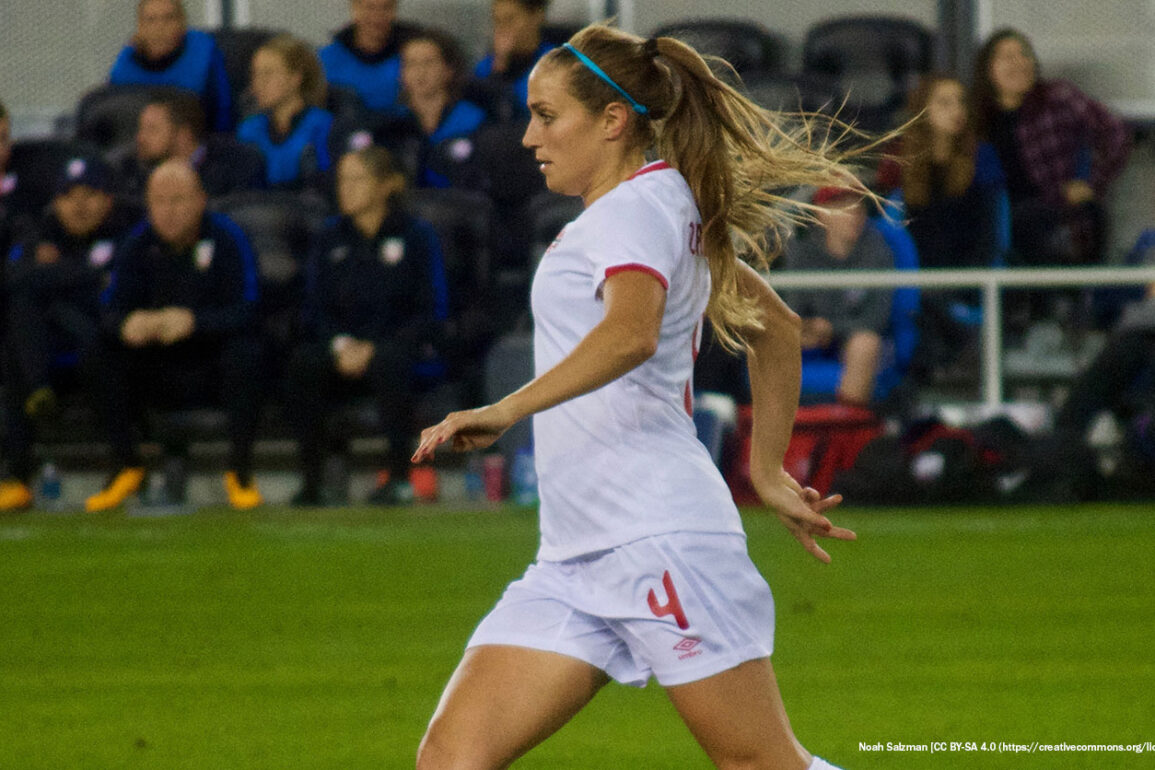 Noah Salzman [CC BY-SA 4.0], via Wikimedia Commons
[dropcap]S[/dropcap]helina Zadorsky is a defender for the Orlando Pride in the National Women’s Soccer League (NWSL) and the Canadian Women’s National Team. A native of London, Ontario, Zadorsky played college soccer at Michigan. In 2016, Zadorsky won a bronze medal at the Rio Olympics.

Here, Orlando Pride teammate Haley Kopmeyer interviews Zadorsky ahead of the 2019 World Cup, where Zadorsky will be making her World Cup debut for Canada.

Haley Kopmeyer: We are here with Shelina Zadorsky.

Kopmeyer: We are here. Shelina, World Cup coming up?

Zadorsky: It is. Very soon.

Kopmeyer: Are you excited?

Zadorsky: We start off against Cameroon, and then we play New Zealand, and then we close out our group stage against the Netherlands.

Zadorsky: Yeah. No, I think it’s a well-rounded group. I think you have the speedy, athletic African nation, and then you go and play a really organized and just sound team against New Zealand. They’re always powerful, big, fast, strong, so that’ll be challenging. Then The Netherlands, I mean, they’ve got some of the best strikers in the world. I think that will be a really big challenge to close out the group.

Kopmeyer: What do you guys got to do to get out of the group stage?

Zadorsky: Of course, we want to start strong. That’s been one of our focuses in being able to start games strong. I think that first game against Cameroon, that’s all we’ll be focusing on. I think our prep is great, but once you hit game time, you can only focus on one game at a time. I think we’ll have to be really sound defensively and watch out for their counterattacks, for sure. Then, hopefully, we can put some attacking flair on and get some goals in there. Then each game, I mean, will have different challenges, but I think knowing that we’re the highest ranked, we want to come out on top.

Kopmeyer: Love that. Obviously, you only know who you’ll play against in group stage right now. Are there any teams or players you’re kind of looking forward to playing against?

Zadorsky: Oh, good show. I think it’s neat just in our footballing world how well you get to know some of the opposition just personally. I mean, obviously playing against the U.S. is always incredible, and that rivalry is very real, so I think it would be awesome to play against our Orlando Pride teammates. At the same time, I think Australia are a really young and exciting team, and I mean the thing is we could meet any number of teams, but overall, I just think it’s going to be an exciting World Cup with a lot of quality players.

Kopmeyer: Do you think this is the deepest the World Cup’s ever been?

Zadorsky: I would say so. Obviously, this is my first World Cup, but just knowing how talented these teams are, and how every game’s going to be a challenge, I think it’s exciting for women’s football.

Kopmeyer: Are there any players on Canada we should keep our eyes on? Or keep our ears out for? Eyes on?

Kopmeyer: Is there anyone on Canada we should look out for?

Zadorsky: Yeah. I like that. Nice. You know what? I am such a fan of Ashley Lawrence. I think she’s just the full package for a footballer, and, I mean, she can whip up and down the sideline. She’s incredibly fit and fast, and I think when she plays fullback for us, she’s an attacking fullback but also solid one-v-one. I think she has an exciting career playing at PSG [Paris Saint-Germain], and she’s just grown a lot in her game, so I think definitely look out for her. Then I think you know that girl Sinc-

Kopmeyer: Never heard of her.

Zadorsky: That one girl? No. Never? Yeah. I know. She’s kind of a legend.

Kopmeyer: She’s coming up on the record for most goals in her career.

Zadorsky: Yeah. She’s coming up on the record. You might want to look out for her. Most goals in international football.

Kopmeyer: Teams might want to keep an eye on that one.

Zadorsky: Yeah. I’d say the most humble one as well.

Editor’s note — In case you’re not following along with the banter, Zadorsky is referring to Christine Sinclair, who is closing in on breaking the record for most international goals (that’s male or female) currently held by Abby Wambach. An up-and-comer, for sure.

Kopmeyer: You’ve been playing in an NWSL season, and most of the girls are in either the NWSL or in their own club environments all over the world. What is it like prepping from afar? Does that make sense?

Kopmeyer: You’re training for another purpose with your own teams, but what’s it like in terms of chemistry to be doing what you’re doing in different places?

Zadorsky: Yeah. I think it’s a good challenge to have, because club soccer’s come such a long way for women’s football, and I think it’s exciting to be playing professionally in one of the best leagues against amazing players each week. I think that alone is amazing preparation.

With that being said, I think we do a good job in having little connects as we call them. We don’t go too many weeks without speaking to our national team, which is nice, and just getting to connect with those players. We always have plans coming into camp and what-not. I think we do a pretty good job picking up speed right where we left off every time we come into camp.

Kopmeyer: Obviously we know what the focus is. But is there anything about going to France non-soccer related that you’re excited about?

Kopmeyer: I haven’t thought too hard about it though.

Zadorsky: Yeah. To be honest, it’s hard to think past that field and the ball, you know? And that trophy.

Zadorsky: Yeah. The job. It’s really hard, you know? Not quite the travel trip, but I think I’m really looking forward to having my mom and my boyfriend there, and my cousin, and just my support system who will be there in France with me for the group stage definitely, and potentially further. I think I’m really excited about sharing that footballing experience in France with them.

Zadorsky and the rest of the Canadian Women’s National Team open up Group E play against Cameroon on June 10 in Montpellier.