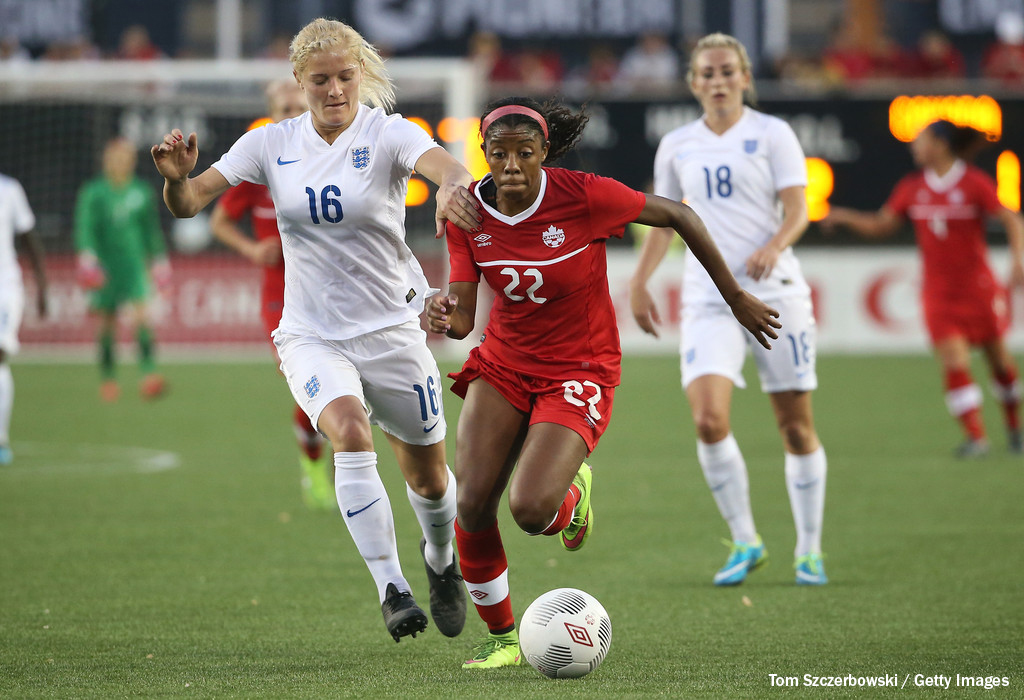 Prepping for the Podium with Canada’s Ashley Lawrence

[dropcap]A[/dropcap]shley Lawrence has been an instrumental and dynamic player for Canada in several international competitions in both the midfield and defensive roles. Ashley Lawrence will be making her second World Cup appearance in France. The midfielder currently plays for Paris Saint-Germain in France, an obvious time zone advantage. We spoke with Ashley about her personal preparation for the tournament as well as Canada’s.

Editor’s note — This interview has been edited for length and clarity.

Nyla Peterkin: Age-wise, you’re relatively young but you have a lot of experience with the senior national team. Do you think it impacts how you interact with your teammates?

Ashley Lawrence: When I look at myself and my role, it’s really changed over the years. This will be my second world cup and I think that I’ve grown a lot just with my experience with PSG, and every day’s a challenge playing against some of the top players in the world. I think that despite my age, I am younger, but I still do have more of a leadership role and link the younger players and newer players on the team with some of the veterans.

Peterkin: This roster is going to be pretty different from your first world cup in 2015. What are your thoughts?

Lawrence: I think that it’s great to see the progression in Canada and with the national team. I feel like from the last world cup, Olympics, every cycle, the team is changing. But that’s just a natural progression. But I feel that it’s positive because to really see the future of Canada, there’s a lot of young players coming through that are bringing new dynamics, just their qualities — things that we really haven’t seen Canadian players do.

I think that it’s an exciting time and going into world cup we’ve really put in a lot work. We’re at the point where we’ve really found a balance of veteran players with the experience but also this new dynamic where now we have really allowed players to excel on the field and just be free and play the game that they want to play, I think that we’re now really not only a defensive team, that we’re physical, and it’s really hard to break us down, but we also have added more in the attack, we have players that can score, that can create, and I just think that we’re well-rounded and definitely a threat going into this world cup.

Peterkin: You’ve played on the back line, sometimes in the midfield. How does this relate to building chemistry with players on both lines on and off the field?

Lawrence: I think it’s huge. It’s great that with the national team, we’re very adaptable. We have players that can play in multiple positions, but we do thrive on our connection, so for me being in the back line, building on partnerships with center backs or even wingers, being a full back, I think it’s really important for me. And that’s one of our key elements to have success and to have results. To be able to play in defense and then go into midfield, I think it’s just the belief that the team has in me and with other players that are able to do the same. And it just allows us the freedom to really bring our qualities and for me, I like to express myself on the field, with my pace added to the attack so I think in midfield that brings a different picture for the team versus when I’m in fullback, so I think it’s cool that I can attack from a different angle or a different area of the field and just pose problems for the opposition.

Peterkin: Is there a highlight you have from World Cup preparation?

Lawrence:  Last World Cup, scoring my first goal for Canada. It’s funny because every time I remember it, I remember a different detail. Whether it was someone in the stands, my family was there, all of my friends, former teammates that I grew up playing with, so that was a really special moment and being in Canada that was really a moment that brings me joy and that I really like to relive. It helps me stay motivated. Thinking of tournaments before of when we were successful, I like to take out bits and pieces from that to really keep me motivated and just remind me that we do belong and we do have the team that can be number one.

Peterkin: Would you say that your approach to the World Cup is different this time around?

Lawrence: The first World Cup being in Canada was awesome to play in front of friends and family, but also really for me to get that experience under my belt. It was awesome to have the mentorship of the older players and that’s what I really want to be for the younger players or even newer players on the team. I think that for me, I have some personal and individual objectives but my role is different in being a leader, being an example and being a voice, and helping the team with anything that I can do on or off the field and just really pushing this team because I know how important it is and it only comes around every four years.

Peterkin: What do you think Canada has to do make it out of the group stage?

Lawrence: I think we have to stick to our game. Tactically, we’ve put in a lot of work. And for us, it’s staying disciplined for 90 minutes. We’re coming up against three good teams that will pose different challenges but it’s important for us to not forget our game: imposing ourselves on opposition and setting the tempo. Once we put the goals in, it’s really about staying present until the 90th minute, 90-plus minute.

Peterkin: How important is it to study and know your opponent’s tendencies or their style of play?

Lawrence: Oh, it’s extremely important. I think at the highest level, it’s really the details that make the difference. For us, we do as much work as we can to know our opposition inside and out but once the game is there, it’s really, for me, which team wants it more. But for sure there’s a groundwork to prepare. We talk about winning our battle; it’s like a 1v1 if I’m a fullback, on that day I want to win my battle against the winger and it’s about beforehand knowing if she’s right-footed, if she likes to cut inside, just little details that can really give us an edge as a team but also then once it’s there during the game it’s knowing that no matter what she will not pass me, she will not beat me, and I think that collectively if we can all win our individual battles and we’ll win the game.

Peterkin: How do you maintain your focus during games?

Lawrence: For myself, it’s actually taken some time to develop it. But typically, during training, during games, I’ve really developed a mental framework of where if something does happen — I have a bad touch or a bad play — it’s just about the next task and refocusing.

I find that before I was really dwelling on a mistake and it could ultimately impact the rest of my game. But over time, with a lot of practice and effort, I’ve really found myself on the field — like, okay, it happened and letting it go so I can move on and a big thing for me is that if I do make a bad pass or a mistake it’s like the next ball that I get is just about keeping it simple and connecting my pass because I think once I make a positive play, I regain my confidence back and then I am able to really be free and play the game that I know how to play.

I think the key is just to not really focus on it; it happened and okay, it happened, but now it’s about moving on and how can you really make a positive impact on the game.

Peterkin: Are there players or certain teams you’re most excited to play against?

Lawrence: I think it’s cool that we’re able to play the Netherlands because we played them in the last World Cup in our group stage. That will be another good matchup because they are a top team and have a lot of world-class players, as do we. I think it will be exciting to have a top game already in the group stage. Moving forward, in order to be number one you have to beat the best. The U.S. is one of our rivals, facing up against them, that would be a huge test for us. It’s awesome that we can play some of the top teams in the world like France, Germany, England. They [England] knocked us out of the last World Cup in Canada, a little bit of revenge or vengeance there.

Peterkin: Which players from Canada should we be on the lookout for to make a big impact?

Lawrence: Kadeisha Buchanan, her qualities coming out of the back. She’s a leader on the team now with 80-plus caps at such a young age and playing for one of the top clubs in Europe — for sure looking for her to lead us from the back. Jessie Fleming in the midfield, she’s a younger player, too, but far beyond her years in playing style and just an engine in the midfield; [she] is really a driving force for our attack and just really fun to watch and she’ll never stop for 90 minutes. Another player is Nichelle Prince. She’s an attacker and she brings all the qualities with her pace, her vision, and her decision-making. I think that in the final third she’s really dangerous for us and creates so much and has been scoring consistently for Canada recently. Those are three players that I think will cause a lot of mayhem for other teams, which I’m happy about.

Peterkin: What’s the mood among the players? Tell me a little bit about that.

Lawrence: The mood is definitely good. We’re in the last stages of preparation and staff and players, we are consistent in our objectives on going in to winning it and being number one in the world. There’s that balance of excitement but also focus because it’s really important for us. It’s for us to really show the hard work we’ve put in and that we’re right now top five in the world, that we’ve been on a positive steady rate and that we want that to continue.

Lawrence and the rest of the Canadian national team will kick off their World Cup play June 10th against Cameroon.