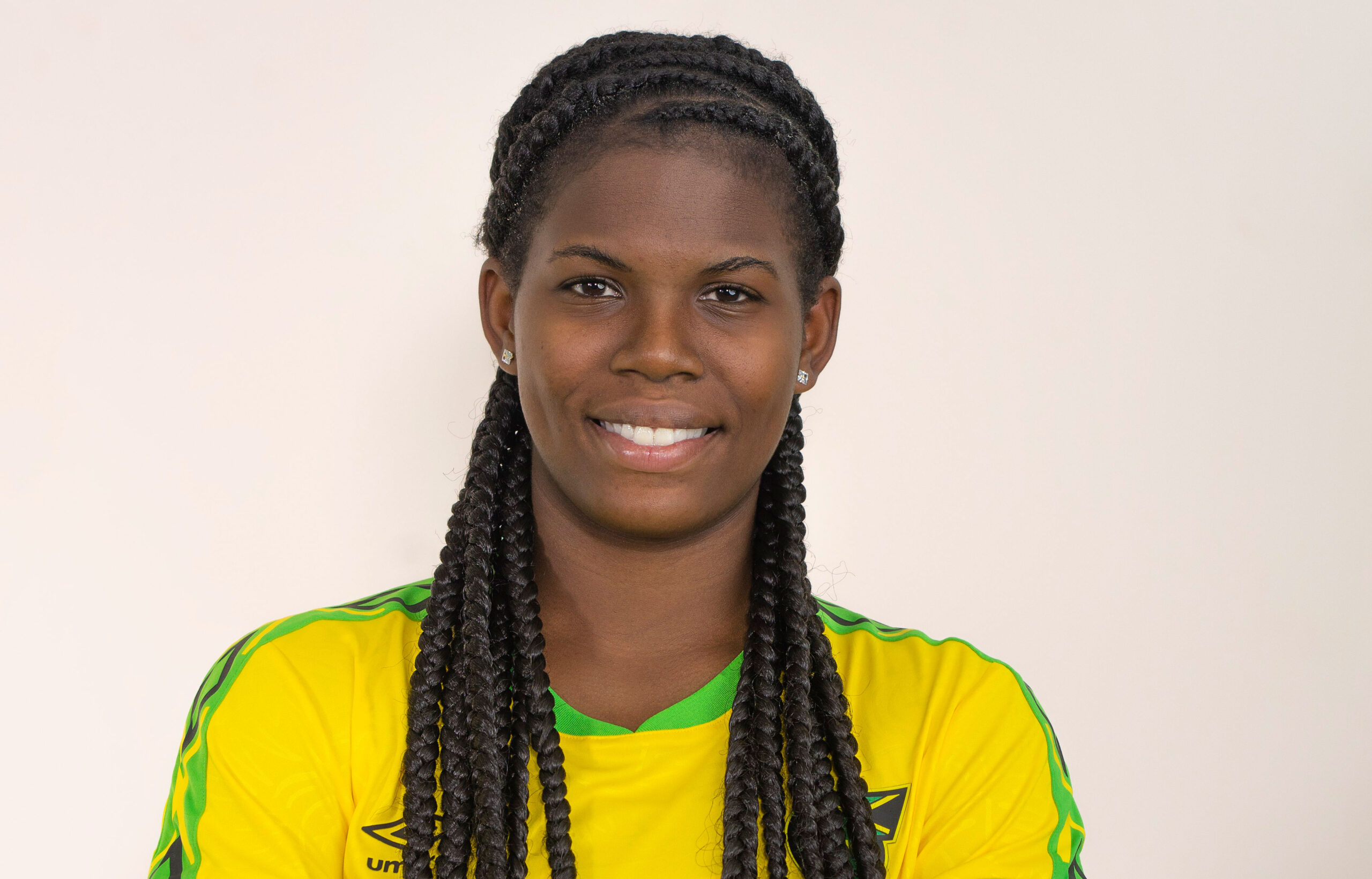 “HAVANA!” the voice on the other end exclaimed.

We quickly caught up and exchanged the latest news in the soccer world. Jamaica’s friendly against South Africa that resulted in a 1–1 tie, the goal scored by Bunny to equalize. The start of my season in Norway and adjusting to my new home. I ask a few questions about her classes at the University of Tennessee and graduation in a few weeks. She is studying communication studies. I reminisce, but don’t miss, when I was still in school and finishing up my last classes to graduate

Bunny was someone I heard about before I met. Being a few years younger than me, our paths never crossed in college. The only things you hear about Bunny are good things. Her energy is contagious, which I quickly found out. I first met Bunny at a Jamaican National Team camp in Jamaica in early January. She greeted me with a big hug and a smile, and said, “Hi, I’m Bunny!” It was my first camp with the team. I was reserved and out of my comfort zone. On one of the many long bus trips during camp, I found myself wrapped in conversation with Bunny.

“Bunny” was a nickname created by Kentardo, Shaw’s older brother, which she chose to embrace. Every Sunday in Jamaica it’s a tradition to drink carrot juice. While drinking the carrot juice, Bunny would also eat a plate of carrots.

“I just liked carrots,” she said.

Her brother one day said, “Hey, you know who else eats lots of carrots? Bugs Bunny.”

After that, there was no turning back.

We spoke largely about soccer, where I had played, where I was playing, and where she intended on playing. I recounted my experiences in the National Women’s Soccer League (NWSL) playing with the then Seattle Reign FC and the Washington Spirit, entailing its many ups and downs. At the time, the NWSL College Draft was around the corner.

“Are you going to enter the draft?

She held back her initial response and laughed

“After all the stories I have heard, not right now.”

“You never want to play in the NWSL?” She debated the question but it was clear the NWSL was not an enticing idea for her at the moment.

“Honestly, maybe in the future, not right now,” she said.

“It’s a young league and is going through growing pains, but I think at some point you should experience the NWSL. So, if not the NWSL then where?” I asked.

Bunny isn’t sure where she will begin her professional career. At the moment, her focus is the  World Cup this summer. She hopes to have a team picked out before that time but for now is still searching.

Before meeting Bunny in person, I knew we came from very different worlds. I spent the majority of my childhood living on a farm in Gainesville, Florida, while Bunny grew up in Jamaica and spent five years in England in her early childhood. Our common passion for the game quickly bridged the cultural gap. She sat in her college dorm room in Tennessee while I sat in my living room in Kleppe, Norway, and the conversation flowed effortlessly.

I’m Jamaican but I didn’t spend my childhood in Jamaica so I asked about growing up in Jamaica.

“What was it like growing up in Jamaica? Playing soccer? Walk me through your day-to-day routine?”

Bunny smiled as she remembered her childhood, then laughed at my question.

“This is interesting. So, I woke up at 7, mom makes me breakfast. It’s already made, cornmeal porridge. Everybody is sleeping and I am up for school. I get dressed and dad comes to pick me up. School is close to his workplace so he takes me to school. We listen to music on the way, typically Dennis Brown and Gregory Isaacs. I get to school and we start with devotion.”

“It’s prayer, we do it with the whole school. There is a big hall and you go in there by your year. Class is from 8:45 to 2:40. Practice is at 3 and it’s right outside the school. It ends at 5 and I put my school uniform back on and I go watch the men’s club team practice while I wait on my other teammates before we head to the city.”

The city she is referring to is Spanish Town Jamaica.

I take my taxi and go home, the Angles route. I come off the taxi and still don’t go home right away and catch up again. I walk into my community; I always stop because my friends are also on the street and you know you got to hang out a little. I go home, change my clothes, eat my mom’s food or my mom’s dinner, and then go by my dad’s and eat my dad’s dinner.”

“What do you mean?” I asked. In my mind, I imagine her walking to her dad’s place and stealing a few bites.

“So, they don’t live together but they live like a minute from each other. So, I eat my mom’s food and then go to my dad’s and eat my dad’s food.”

At her mom’s she would indulge in curry chicken, and then later rice and peas and a slice of fish with dad.

“Did they know that you did this?”

“Of course. With my mom it’s just us when we eat. At my dad’s, my brothers are in the yard and so are friends. They are playing music and dominoes. After my belly is full, I go back to my mom’s, take a shower, talk with my mom, and then go to bed and pillow rock [go to sleep].”

Family is Number One

Family is everything to Bunny. Throughout her life she has experienced the loss of loved ones that made her question the pursuit of her dreams. She recounted as a teenager how the boys would play football in the street as she sat enviously on the curb.

“I prayed and prayed the rain would fall. When it rained, the fields got too flooded and the boys would play in the yard, which meant I got to watch.”

As Bunny grew so did her love for the game. She got noticed by the Jamaican Youth National Team program, which led to more opportunities to play with club teams in South Florida. The more exposure she got, the further from home she found herself. I asked her what her biggest obstacle was. She told me it was being away from her family.

“I cried. When I tell you I cried, I cried like I would never see my family again,” Shaw said.

Bunny’s path took her from weekends away from home to years away from home. The distance was something Bunny has struggled with greatly. After hearing about the pain and struggle I couldn’t help but to wonder why she keeps going? Her answer was simple.

“There’s not a lot of opportunities for kids in Jamaica. That’s why my mom didn’t want me to play. She didn’t want me to be let down. But she also said, ‘I could be the one to make a difference.’ I have an interesting story I use it to inspire younger players, especially in Jamaica. A lot don’t think they are capable. If I can, despite life, why can’t you. When I play, it is a way to show others it can be done.”

In addition to being a role model and image of hope for the young aspiring players in Jamaica, Bunny plays to feel free.

“I had a rough childhood but when I was on the soccer field, I wouldn’t remember what was going on off the field. I remember thinking, “Wow, this is cool,” laughing and dancing like nothing is wrong. I feel free. No worries in the world, other then put the ball in the back of the net.”

Being a part of the Jamaica Women’s National is a new experience for me but for Bunny it’s something she’s known since she was 15.

“What does the Jamaican Football Federation need to do in order to keep growing?” I asked.

“Stop the bias; it is so biased and too old school. Better promotion. When we were in South Africa last month, we went to events where games for their team were being promoted months in advance. We are going to the World Cup and people don’t know. It’s all about the boys. It’s sad. You [the Jamaican Federation] are asking me how to spell my name and I have been playing for Jamaica since I was 15?” she recounted.

Her passion for life is evident in every question she answers. Every question I ask makes her laugh but none more than this one.

“How important is It that Jamaica made the Women’s World Cup for the first time?”

She erupts with laughter and excitement.

“Tell me in words!” I prompted.

“I don’t know how to start that answer. Lady, get yourself together. I can’t even stress how important that is. First thing first, it’s the first time ever. We qualified, I got contacted by all the Caribbean teams and coaches. A lot of people doubted an island could qualify. Not only are we representing Jamaica but the Caribbean. It’s so hard to make it to the World Cup. It’s also so deserving. We talk about what we went through and what we have to go through to get here. It’s like, ‘Wow.’ Usain Bolt, Sean Paul, Shaggy saying congrats. When you have those people saying something you know it’s big-time.”

We talk about the things that have changed since qualifying and the support the team has felt. There is no doubt the support has increased and continues to do so as the World Cup gets closer.

“What do you think Jamaica has to do to make it out of group stage?”

“You mean what do WE need to do to make it out of group stages?” Shaw asked.

I smile in agreement. “Yes, what do we need to do?”

“Who on OUR team should everyone be on the lookout to make an impact?” I asked next.

“Jodi Taylor, she’s young and has so much potential, and Chiney. Chinyelu Asher she’s really crafty,” she answered.

“Alright my last question, who are you most excited to play against in the World Cup this summer?”

“Marta because I like her style of play. I think she’s really creative. Growing up, I didn’t really watch women’s football because I was always with the boys. I would always hear about Ronaldinho, everywhere. I started watching then and he was my favorite of all-time.

Then I heard Marta was the female version of Ronaldinho. I watched her for the first time on a highlight on YouTube; that’s when I started watching female football and Brazil. My idol became my rival.”

Growing up, Bunny dreamed about making it to a World Cup. From the age of 15, she was surrounded by older players whose ultimate career goal was to represent Jamaica in the World Cup. As Bunny’s passion for soccer developed, so did her dreams and aspirations. In the soccer world, the World Cup is arguably the highest level of competition, one in which everyone suits up in their country’s colors and play for something greater than yourself.

“I remember being told, ‘If you make it to a World Cup, your life will change.’ I want to go to a world cup because I want my life to change.”

Shaw and the rest of Jamaica’s National Team open up Group C play against Brazil on June 9 in Grenoble.