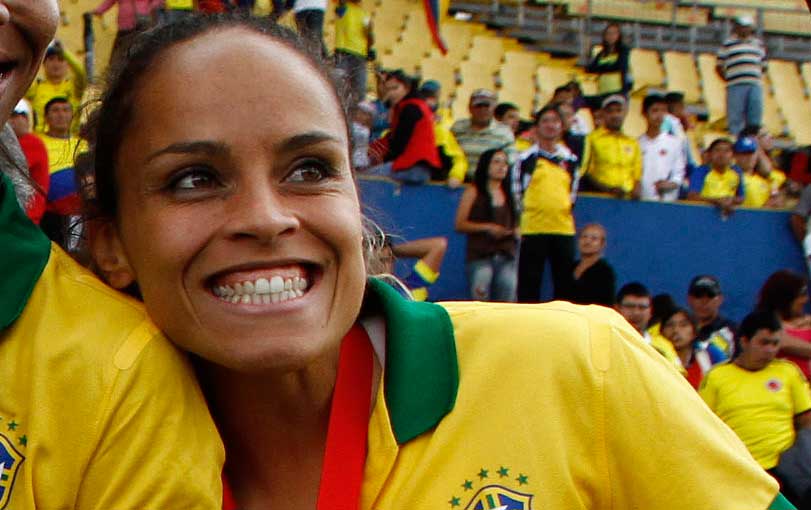 [dropcap]M[/dropcap]onica Hickmann Alves, known as Mônica, is a defender for Corinthians in the Campeonato Brasileiro de Futebol Feminino, Brazil’s top tier of women’s football, and the Brazilian Women’s National Team.

Prior to joining Corinthians, Mônica played for the Orlando Pride in the National Women’s Soccer League for three seasons. In 2014, Mônica made her senior team debut for Brazil in a 0–0 match versus France. The following year, 2015, she scored her first senior international team goal in 7–1 win against Ecuador.

Here, former Orlando Pride teammate Haley Kopmeyer interviewed Mônica ahead of the World Cup to get her thoughts on the tournament and why she joined Corinthians.

Editor’s note — Mônica translated her own answers into English and we’re grateful for that.

Haley Kopmeyer: Tell us about your new team and opportunity in Brazil! What led you to this move?

Mônica: We all have been in a giant process of women’s football evolution and it’s not different here in Brazil. So I understood it was a great opportunity for me to contribute with this evolution and also a new challenge after many years playing abroad. I’ve chosen Corinthians because I saw in the project the beginning of a great work. Corinthians is a very competitive team and it makes me confident for the World Cup.

Kopmeyer: Have you been reunited with King, your beagle puppy?

Mônica: Since I’ve come back I couldn’t meet my buddy. But soon I’ll bring him close to me. King is with my mom, in Rio Grande do Sul.

Kopmeyer: In the World Cup, what does your team have to do to make it out of the group stage?

Mônica: Understand the difficulties and strategies of each team and conquer game after game.

Kopmeyer: In the World Cup, which players and teams are you most excited to play against?

Mônica: I’m anxious to face Jamaica, France, and Germany. These are challenging teams that can surprise everyone, and also Jamaica will be our first opponent.

Kopmeyer: Which players from Brazil should we be on the lookout for to make a big impact?

Mônica: I believe Adriana and Andressinha will be great players in this World Cup.

Kopmeyer: What are your goals for your upcoming time with Brazil and your new team?

Mônica: With Brazil, is surely winning the World Cup.

With Corinthians, is to add value, bring the experience I’ve gained playing abroad, and enjoy what’s happening in the country. To be and to live this evolution in women’s soccer, to be champion of Campeonato Brasileiro [Campeonato Brasileiro de Futebol Feminino, top tier of women’s soccer in Brazil] and Libertadores [Copa Libertadores Femenina, club competition in CONMEBOL].

Mônica and the rest of Brazil’s National Team open up Group C play against Jamaica on June 9 in Grenoble.