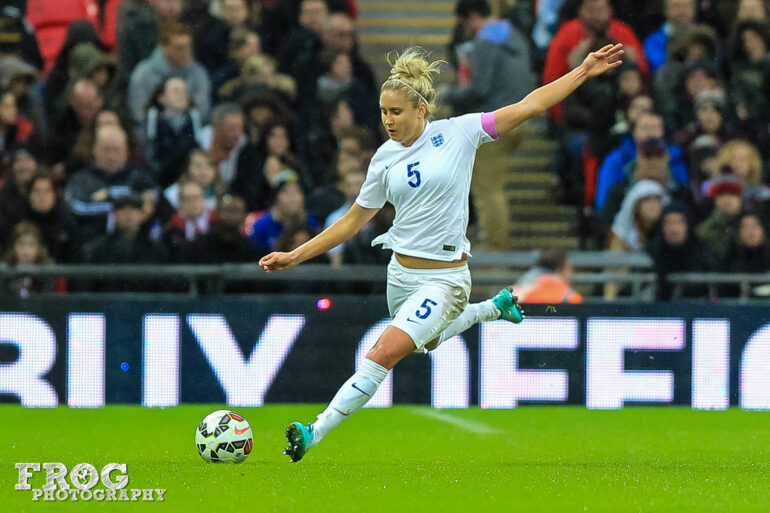 Rachel Daly admits it’s a “disappointing” way to end 2018 after England fell to a 2-0 defeat at home to Sweden in front of 9,500 fans on Sunday, their first defeat on home soil in almost four years.

It marked just the second defeat of Phil Neville’s first year in charge of the Lionesses as goals in the first half from Sofia Jakobsson and Anna Anvegård — her first for Sweden — left England with a mountain to climb and they never really left the base.

“Second half we came out well but it was a little too late,” said the Houston Dash forward. “We didn’t come out first half like we should or like we know how to. Conceding those two goals sets you up for a tough rest of the game.”

Neville gave starts to all 22 regular members of his squad over the course of the two matches against Sweden and Austria, with Daly scoring as a late substitute against the latter before starting as the No. 9 in Rotherham on Sunday.

Echoing her manager’s statement regarding England “needing” a test and a defeat like this to prepare for the World Cup, Daly still says it’s a disappointing end to the year but has enjoyed her first consistent year in the squad under Neville.

“We’ve had a long year. The girls have worked hard but we’re super disappointed to end the year like this. Now we can go away, work hard and come back in the new year and show what we can do.

“I’ve loved working with Phil, he’s very good. He’s clear, honest and open with his communication. We know what he wants, what he expects, and what he demands, and I think it’s been a great year overall.”

Expanding on the past 12 months, Daly added, “We’ve qualified for the World Cup, just missed out on SheBelieves, so I think we’ve done pretty well. We know there’s a long way to go to the World Cup, we know what we need to do to get there. It’s been a positive year but not a positive way to end.”

While her teammates head back to England or Europe to prepare for next weekend’s domestic games, Daly can enjoy some brief time off after her season with the Dash came to an end several weeks ago.

The next time Daly represents her country could be back in the United States with Neville confirming England’s next game will be at the SheBelieves Cup, expected to be contested with Jill Ellis’s side, plus newcomers Japan and Brazil.

“It sounds like it’s different teams this year and it’s a massive test,” said the striker. “It will show us what kind of opposition we’re going to face in France and we need to play these top 10 teams, there’s no better way to test ourselves.

“We’re disappointed and we’ll all go home with our heads down but we did need this. We know now areas to improve on and it’s quite evident in that game what we need to work on. It’s not good to lose but it’s good for mentality to see what defeat looks like and know we don’t want to go there again.”

Sunday also marked the 100th cap for England captain Steph Houghton, who received a presentation the night before the game at the team base and a special England shirt presented to her on the pitch alongside her family.

Despite the disappointment of defeat, Houghton says she’s now looking forward and taking nothing for granted when it comes to how many more times she’ll play for her country.

“With the injuries and setbacks I’ve had it’s been tough but I’ve played a role under Hope [Powell], Mark [Sampson] and Phil,” said the captain.

Despite a special occasion and presentation, Houghton says she’s left the counting of caps down to her family over the past few years as her 100th cap has come closer and closer.

“We had a nice presentation last night. I’ve got a big board with a lot of pictures and a big cake, I don’t know where either of those have gone!

“My dad’s been counting down the caps, he’s been to every game in England and the support from all of them has been unbelievable.”

Houghton was joined on the pitch by dad Len, mum Amanda, brother Stuart, nan Doreen and husband Stephen before the match and after the recent news regarding her personal life, Houghton understandably didn’t want to discuss the matter too much but paid tribute to her family for their constant support.

“This one is for my family and for my husband,” she said. “There’s a lot of lows away from the pitch but also a lot of highs and they’re the people that keep you grounded and focused on what you’re supposed to do.”

With 100 caps under her belt, Houghton is setting no targets after Neville said she could match Fara Williams’ current tally, and also couldn’t pick out her favorite cap so far to date.

“Ooo, that’s a tough one,” she laughed. “Making your debut is always a special one and leading the team out for the first time. Winning that bronze medal also because it changed the interest in this team and this sport.”