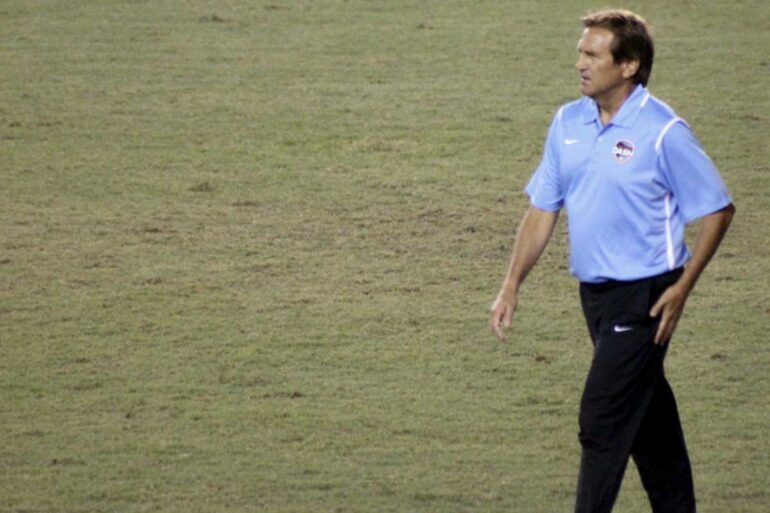 by Victor Araiza from Houston, TX, United States of America [CC BY 2.0], via Wikimedia Commons

Waldrum left his position as head coach of Notre Dame to lead the Dash when the team became the first expansion team to join the National Women’s Soccer League (NWSL) in 2014. In three years with the Dash, Waldrum amassed a 19-39-13 record; this year, the Dash sit at 2-5-0 and are in eighth place. In its short history, the Dash have finished in ninth place (2014), fifth place (2015), and eighth place (2016), and just missed the playoffs in 2015.

“Randy is an excellent coach and a great man. He has been fully committed to the Dash and the pursuit of our goals over the last three and a half years,” Dash president Chris Canetti said in a press release. “Unfortunately, we have fallen short on expectations, and after a tough start this season, we both agreed today that it’s in the best interest of the team to have a new voice leading the group. We believe this team has the talent to be a playoff contender, and we hope this change can help point it in the right direction.”

Via press release, Waldrum issued the following comment: “I spoke with Chris today and we decided that it’s in the best interest of the players and the team to go in a different direction,” Waldrum said. “This is a tough decision to make, but we all want the team to do well. This group has the talent to fight for a playoff spot and there are a lot of games left to reach that goal. I want to thank the organization, the players and the fans for a very memorable tenure here in Houston.”

In past NWSL College Drafts, the Dash have drafted Kealia Ohai (2014), Morgan Brian (No. 1 overall pick in 2015), and Rachel Daly, Janine Beckie, Cari Roccaro (all in the first round in 2016) — and all are still with the team. In addition, the Western New York Flash traded U.S. Women’s National Team midfielder Carli Lloyd to the Dash in 2015.

Despite the mix of young talent and solid veterans, plus internationals from Brazil, Australia, and elsewhere, the Dash have lacked consistency and cohesiveness.

A search in under way to find a new coach Houston Dash President Chris Canetti said in a media conference call following the announcement.

That coach will be tasked with finding the heretofore missing consistency and cohesiveness. Canetti further outlined his expectations for new coach:

“My expectation is that this is a roster full of players that is built to win now and have the ability to win now, with numerous international players who play for their countries and a deep roster of talent. I’ve definitely consulted with some of my friends who are real experts in women’s soccer and asked them about our roster. ‘Tell me about it. What are your evaluations and thoughts?’ And everybody seems to think that this is a team capable of winning.”

Waldrum has been offered a technical advisory role with club.