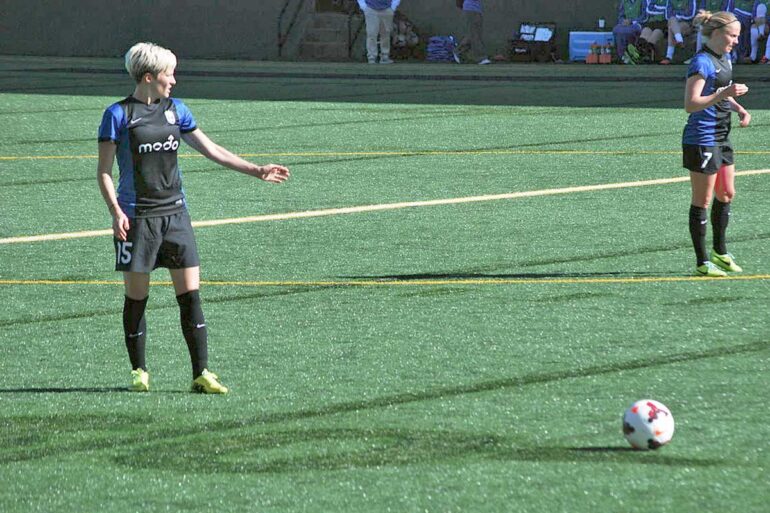 by Hmlarson (Own work) [CC BY-SA 3.0], via Wikimedia Commons

The Seattle Reign FC picked up their first road win of the National Women’s Soccer League (NWSL) with a 2-0 win over the Houston Dash at BBVA Compass Stadium in Houston, Texas. The win puts Seattle in fourth place in the league table while Houston remains in ninth place through seven weeks of the season.

Conditions in Houston were less than optimal with temperatures reaching more than 90 degrees at a local kickoff time of 2 pm. Water breaks were instituted to help keep players hydrated.

Houston pressed early and had success in pinning Seattle into its own half but failed to convert on any of the chances created. The Dash elected to play a more direct game and tried to get in behind Seattle’s backline, and it almost worked just after kickoff after Andressa sent in a ball over the top, looking to spring Kealia Ohai, who was making a run into the space between the Reign center backs. Rachel Corsie was able to recover and slow Ohai down but she found Janine Beckie on the far side of the box. Beckie’s shot was well off the mark and failed to trouble goalkeeper Haley Kopmeyer.

Seattle was patient and looked to transition off Houston turnovers. In the eighth minute, Rebekah Stott started buildup play from the right, passing to Christine Nairn, who sent it to Jessica Fishlock. Fishlock switched the point of attack to the left, finding an open Megan Rapinoe running into the box. Rapinoe one-timed a cross into Beverly Yanez making a run but her left-footed shot sailed over the crossbar.

In the 10th minute, Beckie was slipped in behind the Reign backline by Andressa but her right-footed shot to the far past was well wide. The Dash again got in behind the Reign backline in the 27th minute when Ohai sent a well weighted ball to Beckie, who had a clear path to goal but defender Lauren Barnes matched her well and executed a well-timed tackle to diffuse the dangerous situation.

Barnes with the timing. pic.twitter.com/XGY6y7Ljnx

Houston again in the 29th minute had success finding space in the seams of Seattle’s defensive line but was unable to convert. Andressa sent in a pass that beat the Reign defense but Nichelle Prince’s shot rattled the crossbar.

Seattle absorbed the pressure and struck first on the counter in the 30th minute. Rapinoe played a nice one-two with substitute Katlyn Johnson and got off a shot that took a deflection off a Dash defender and wrong-footed goalkeeper Lydia Williams. The Reign went into halftime with a 1-0 lead.

To Houston’s credit, they opened up the second half looking to score. Prince got a shot off from the top of the box in the 49th minute that beat Kopmeyer but glanced the outside of the post and went out of bounds.

Rookie Johnson, coming on for an injured Beverly Yanez in the 24th minute, doubled Seattle’s lead in the 64th minute. Nahomi Kawasumi sent in a ball from the right that a darting Johnson collected and, using the outside of her right foot, coolly turned the ball to create space and fired a left-footed shot that Williams had no chance of saving.

Houston continued to be dangerous on the counterattack and created opportunities when exploiting  From her right back position, Rachel Daly played a smart pass in the seam between Carson Pickett and Barnes to find Ohai making a diagonal run in behind the center backs. Kopmeyer was forced off her line to shut down Ohai’s shot and Barnes recovered to deflect the ball out for a Dash corner kick.

Kopmeyer made eighth saves, including a one-hander that denied a well-hit Beckie volley in extra time.

The Dash had one last chance after Beckie sent in a cross from the right that Andressa got enough of a backheel on that took a strange bounce and looked destined for the back of the net but hit the far post. Stott cleared the ensuing rebound to preserve the clean sheet for the visitors.

Fair play to both teams who went all out in the heat. Houston will want more than a few of the eight shots on goal back; the chances are being created by the Dash, who now have lost four games in a row, but the finishing is lacking. The Dash sit in ninth place with six points while the Reign improve to 3-1-3 and will be in the top half of the table after the weekend games with 12 points.

Houston will travel next Saturday to face a Washington team that is also struggling. Seattle is also on the move, facing an increasing in-form Chicago team in Chicago.

It was an eventful game, most notably for the injuries that occurred.

Forward Beverly Yanez suffered a deep cut after a tackle in the 24th minute and had to be withdrawn. After the game, Yanez tweeted out her status:

10 stitches will b fine:) SO happy for the 3 points!Difficult conditions, but everyone worked hard. Hope you feel better soon @RachelDaly3.

At the end of the game, Rachel Daly collapsed on the field and had to be stretchered off. The NWSL released the following statement regarding the heat and playing conditions in Houston:

Daly was taken to the hospital and later released. She gave the following update on her condition via Twitter:

Thank you to everyone pic.twitter.com/nWDbt4qRIP