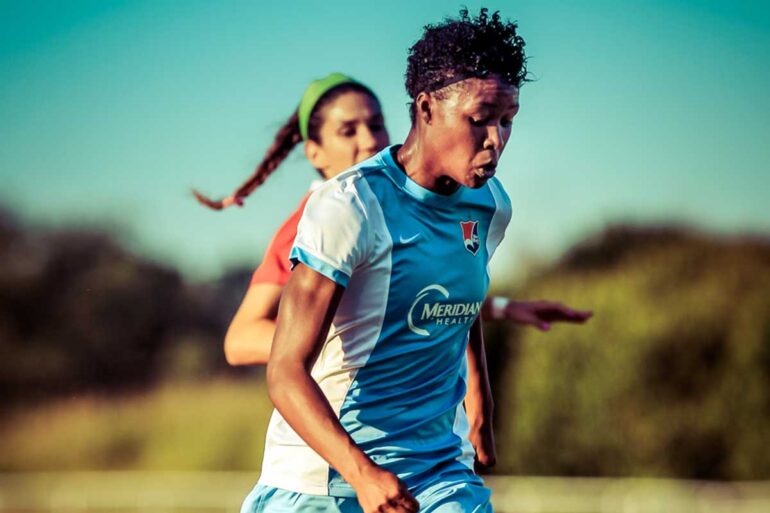 Sky Blue FC defeated the Orlando Pride, 2-1, off a Maya Hayes goal in the 82nd minute at Yurcak Field in Piscataway, New Jersey. With the three points, Sky Blue moves to 4-3-1 in the National Women’s Soccer League (NWSL) while Orlando stays in eighth place at 1-3-3.

The game marked the end of a stretch of games for Sky Blue that saw the team playing three times in seven days, including an away match at Houston. Both teams were without key starters due to injuries: Sky Blue’s Kelley O’Hara was out with a left gluteus medius strain and Orlando’s starting goalkeeper, Ashlyn Harris, was out with a right quadriceps strain.

Stepping into goal for Orlando was Aubrey Bledsoe in her first start of the season and she did well after being tested at the 26th-minute mark and making two key saves.

Orlando maintained the bulk of possession and played in their attacking third through the first 25 minutes. Sky Blue, legs perhaps weary, offered Orland space and time, seemingly content to sit back and stay as compact as possible while looking to play direct off quick transitions. In Sky Blue’s forays forward, it was usually Sam Kerr playing a role, either creating or scoring.

In the 15th minute, Raquel Rodriguez fed Kerr, who turned with the ball and ran into the seam between Orlando’s Alanna Kennedy and Ali Krieger to the endline and cut the ball back toward the top of the box for Madison Tiernan. Tiernan’s left-footed shot was well off the mark however.

The Pride were rewarded for their pressing and possession play in the 18th minute. Marta, dancing with the ball at the top of the box, fed Camila, who sent in a superb ball to Jasmyne Spencer. Spencer was poorly marked by Sky Blue’s defense and took a deft touch to control the ball with her right and then slotted a left-footed shot past goalkeeper Kailen Sheridan to put Orlando up, 1-0.

Bledsoe was called into action twice in the 26th minute. Sky Blue center back Mandy Freeman got on the end of a ball that bounced to her in the box off a corner kick and launched a half-volleyed shot that looked to be the equalizer but Bledsoe spotted it through traffic and made the diving save to knock it out for another corner kick.

On the ensuing corner kick, Rodriguez sent a header to the lower right corner that Bledsoe picked out and saved.

Orlando found success getting forward down its left flank, with defender Steph Catley linking up well with Marta. However, the Pride’s most dangerous chances were formed centrally, usually with Marta running at a defense sitting in low. Orlando might have done well overloading its right side with Ali Krieger and Marta and going at defender Erin Simon, who has struggled with pacy attackers.

As it turns out, Orlando not creating and converting more chances with its possession would prove costly. As the half wore on, Sky Blue started to gain more possession and found the equalizer in the 43rd minute.

The play started from an Orlando defensive switch after center backs were slow in getting back after a corner kick. The height of Kennedy and Toni Pressley make them prime targets on set pieces but also leave the Pride exposed at the back for quick counterattacks. While Sky Blue’s equalizer wasn’t the result of a direct counter, it did take advantage of a backline that gave away too much space.

Sky Blue cleared a corner kick to Kerr, who played the ball out to the right flank to Christie Pearce but Kristen Edmonds, back on defense with Krieger, intercepted the pass and played it back to Bledsoe. Krieger stayed central with Kennedy out right. The Pride backline played the ball to its midfield where Sky Blue’s Rodriguez dispossessed Edmonds and fed it to Daphne Corboz to start the attack. Krieger remained central with Kerr making a run to her right. Kennedy slid centrally to pick her up but Kerr feints as if she’s going to continue her run in behind Krieger and peeled off farther out wide, wrong-footing Kennedy in the process. Corboz took the space Krieger gave her, Kerr held her run (Pressley kept her onside as well), and Corboz laid off a simple pass to an open Kerr in the box.

Both sides opened up the second half with sloppy play, unable to connect passes. Orlando would refocus and start regaining possession. In the 74th minute, Catley served in a terrific ball into Kennedy, who got off a strong header to the lower corner that forced Sky Blue’s Sheridan into a diving save. Sheridan, still on the ground, snuffed out Pressley’s attempt to put the rebound into the net.

As the game wore one, Orlando’s speed of play and ball movement slowed down, allowing Sky Blue’s midfield to gain more possession and controlling the tempo.

The one Pride player who continued to push the tempo was Marta. In the 80th minute, Marta took the ball three-quarters of the field at full speed and launched a shot from roughly 25 yards out that was well off target. The Sky Blue defense did will to stay compact and Pearce stepped to Marta to disrupt the shot.

A Sky Blue turnover in their own half led to a Orlando chance seconds later. Marta fed Spencer out on the left inside the box. Spencer was given space and time but her right-footed shot went wide. The miss set up a goal kick that led to the game-winner for Sky Blue.

Sheridan, with her ability to knock a long goal kick, was the impetus on the scoring drive but it was Kerr who provided the assist.

In the 81st minute, Kerr, given the opportunity to get a head on Sheridan’s goal kick, sent a header down the center of the Orlando defense. Maya Hayes out ran and out muscled Kennedy to get to the ball first. Hayes took a touch to settle the ball and sent a sliding ball past Bledsoe well off her line to put Sky Blue up, 2-1.

Orlando picked up the tempo and pressed to find the equalizer by playing more direct. That’s not the Pride’s strength, however, and Sky Blue was able to withstand the pressure.

Pressley had a good shot in the final seconds but the ball didn’t dip enough to find its way into the back of the net and Sky Blue improved to 3-0-0 at home this season with the win.

The 3-0-0 home record for Sky Blue is the best in team history.