Sky Blue Grabs an Away Win at Houston 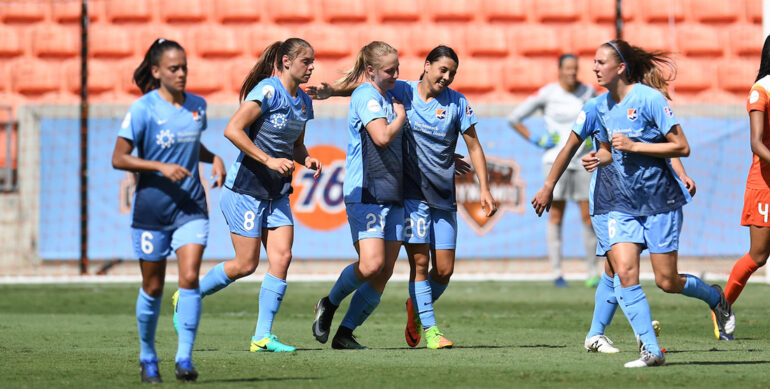 Sky Blue FC defeated the Houston Dash, 3-1, off of goals from Sarah Killion, Leah Galton, and Sam Kerr to improve to 2-2-1 at BBVA Compass Stadium in Houston, Texas. Houston’s Poliana got a goal back in the 76th minute for the home team during week five of the National Women’s Soccer League (NWSL).

For Sky Blue, Christie Pearce returned to the lineup after sitting out the past two games while following concussion protocol. Pearce slotted into her center back position next to rookie Mandy Freeman. Also back into the lineup was Raquel Rodriguez, who missed the last match to attend her graduation from Penn State.

Midfielder Morgan Brian returned to action in a starting role for the Dash after playing 18 minutes in her season debut for the Dash in their loss against the Red Stars last week.

Sarah Killion put Sky Blue up in the 33rd minute after converting a penalty kick awarded after Kerr was fouled in the box.

Kerr assisted on the second goal for Sky Blue with a sublime no-look through ball to Galton, who converted a left-footed shot after taking a touch to round goalkeeper Lydia Williams.

Galton puts Sky Blue up, 2-0. That ball by Kerr tho. #HOUvNJ pic.twitter.com/UcYii07koi

The Dash cut the deficit to one in the 76th minute after Kealia Ohai found defender Poliana with a cross in from the right. Poliana slotted home a right-footed shot past Kailen Sheridan.

It was Kerr, however, who put any hopes of a Dash tie or win to rest after scoring in the 87th minute with a right-footed shot driven low to the far post that Williams had no chance on.

The two teams face each other again on Saturday, May 20, in the Lifetime Game of the Week. Heading into week six, Sky Blue sits in sixth place in the table while Houston is in seventh.

Sky Blue’s Kelley O’Hara was unavailable due to an excused absence.