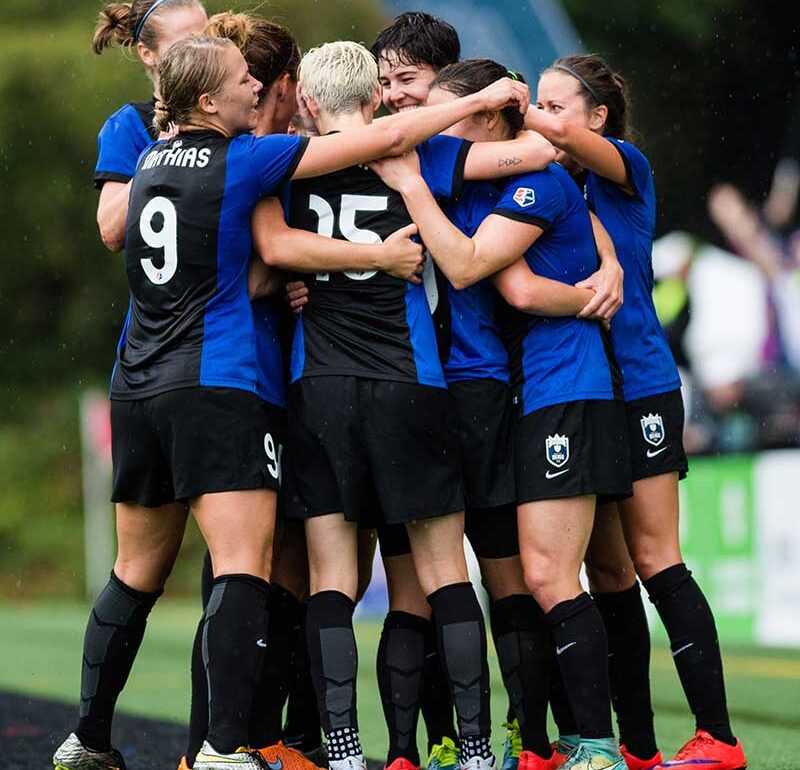 The Seattle Reign FC defeated the Washington Spirit, 6-2, in front of 3,007 at Memorial Stadium to improve to 2-1-2 in the National Women’s Soccer League (NWSL). Washington falls to 1-3-1.

The Reign’s Nahomi Kawasumi led the way with an NWSL single-game record four assists and a goal. Megan Rapinoe netted a brace as well.

The Reign opened up in the 3-4-3 used in last week’s draw with the Thorns, with Christine Nairn returning to the lineup after an excused absence in place of the suspended Merritt Mathias in midfield.

The Spirit started in a 4-4-2 with Cheyna Williams getting the start up top for the first time since being injured in the first match of the season.

The goals came fast and furious in the second half but the opening minutes were fairly even. Washington created chances, including Francisca Ordega finding gaps between the Reign’s center backs, but failed to convert, and Seattle had its way on the left side with Rapinoe sending in a dangerous cross in the 7th minute that Jessica Fishlock brought down on a full run with a beautiful touch but her left-footed shot lacked the power to trouble goalkeeper Steph Labbé.

In the 15th minute, Seattle had a shout for a penalty after Tori Huster challenged Rebekah Stott in the box but the referee held his whistle.

Washington’s defense was content to overload on one side and try to press high; when Seattle was able to break through, however, they had ample space and time.

The match’s opening goal came in the 20th minute by Nairn with the first of Kawasumi’s assists. Kawasumi got it started by dispossessing Kassey Kallman and playing the ball into Beverly Yanez, who played it back into her. Kawasumi made a terrific turn to shield the ball from the Washington defense and laid the ball off to a trailing Nairn. Nairn’s right-footed shot went far post, hitting the post and beating Labbé. It was Nairn’s first goal for the Reign since 2013 — she was traded to Washington in exchange for the discovery rights to Kim Little. She returned to Seattle this year after an offseason trade in exchange for Havana Solaun and the Nos. 3 and 36 overall picks in the 2017 NWSL College Draft.

Seattle’s second goal came in the 35th minute after Yanez put away a Kawasumi cross with the a smart finish with the outside of her foot.

Washington had a good look in the 42nd minute after some good buildup play that saw Ordega get to the end line and pull it back out to Estelle Johnson, who served a ball in that looked to be dangerous enough for Haley Kopmeyer to dive in anticipation of the ball swerving in. It hit the side netting, however. Ordega, such a handful against Sky Blue last week, was contained by Seattle’s back line, notably Lauren Barnes, after the opening minutes.

Kopmeyer was called into action just before the half when she got a hand on Solaun’s low-driven shot to the far post to knock it wide, and the score remained 2-0 for the Reign heading into halftime.

The Spirit regrouped during the halftime break and came out with some purpose. In the 45th minute, the Spirit won possession back from the Reign back line and a miscleared cross bounced to a wide-open Huster at the top of the box but her left-footed shot sailed over the crossbar.

In the 58th minute Washington pulled one back after Solaun converted a penalty kick for a handball in the box. Williams’ shot hit Rachel Corsie in the arm and the referee pointed to the spot. Solaun went right and Kopmeyer guessed correctly but the shot was too strong for her outstretched glove to stop and it was still 2-1 for Seattle.

Cutting the deficit to one energized the Spirit, who pressed and gave the Reign little time and space. Washington head coach Jim Gabarra withdrew Kallman in the 59th minute and switched to a three-back defensive line to cope with the Reign’s flank play.

However, the beginning of the end for the Spirit started in the 68th minute when Kawasumi scored to make it 3-1 after some strong buildup play:

No time was wasted as Seattle added to its tally moments later after more buildup play, including a cheeky backheel pass from substitute Katie Johnson that found Rapinoe making a run up the left side:

This buildup, pt. 2. That Johnson pass tho. pic.twitter.com/mbOVlKJ8Gc

A stretched Washington three-back was just outmatched by Seattle. In the 76th minute, Rapinoe scored her second goal to make it 5-1.

The goal marked three goals within 10 minutes for the Reign, and they weren’t done. In the 79th minute, substitue Lindsay Elston added the final goal to Seattle’s dominant scoreline, taking Kawasumi’s layoff to her in the box on the bounce and rifled it past Labbé.

The Spirit found a goal in the 88th minute from substitute Kristie Mewis, who put a left-footed shot past Kopmeyer on service from Whitney Church.

The score held at 6-2 and moved Seattle into second place in the table ahead of the weekend’s second day of matches and dropped Washington to ninth place.

Kallman was subbed off in the 59th minute, ending her streak of more than 4,000 consecutive minutes played. Mewis played her first minutes since subbing off in the 67th minute against the Spirit’s 1-1 draw with the Orlando Pride.