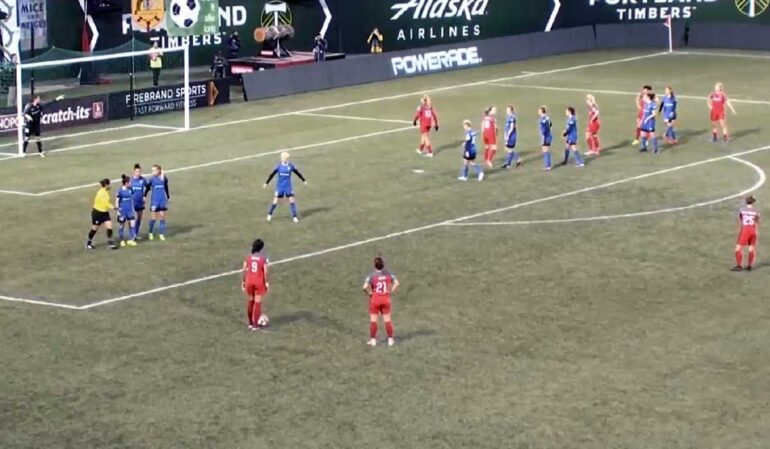 The Portland Thorns FC and Seattle Reign FC drew, 2-2, at Providence Park in Portland, Oregon, in front of a crowd of 16,160 in the 14th meeting between the teams. With the point, the Thorns maintain second place in the standings and sit at 2-1-1. The point brings the Reign to 1-1-2 and five points on the season.

Seattle scored in the first minute via a Jess Fishlock strike from just outside of the box. Fishlock won the ball and fired the ball past Adrianna Franch for her second goal of the National Women’s Soccer League (NWSL) season.

Seattle opened up in a 3-4-3, ostensibly to counter Portland’s strong midfield, with Merritt Mathias pushing up higher and leaving Lauren Barnes, Rachel Corsie, and Rebekah Stott on the back line. Portland maintained its familiar 4-3-3 though midfielders Tobin Heath and Dagný Brynjarsdóttir remain on the injured list.

Fishlock was involved in the next goal as well, albeit an own goal that brought Portland level with Seattle at 1-1. Tracking back and sliding in to deflect a Hayley Raso cross in from the right, Fishlock got a foot on it but directed the ball into the lower corner past her goalkeeper.

Merritt Mathias regained the lead for Seattle in the 36th minute. Mathias pounced on a long touch from teammate Rebekah Stott and slotted a sliding, left-footed shot past Franch.

Franch made four saves on the night, including a key stop in the 78th minute to keep the deficit at one and deny Megan Rapinoe.

The equalizer came for the Thorns in the 82nd minute courtesy of Allie Long. Raso, so energetic all match, took the ball to the end line and sent in a cross from the left. The Reign defense cleared the ball but not far enough and second-half substitute Meghan Klingenberg picked it up and sent in a left-footed cross that found Long, whose header got a little help from the crossbar and found the back of the net. The assist was Klingenberg’s first with the Thorns.

Portland almost won it in the 90th minute when the ball bounced to a wide open Christine Sinclair in the box. Sinclair’s right-footed shot beat goalkeeper Haley Kopmeyer but not defender Lindsay Elston, who was there to clear the shot of the goal line.

Portland hits the road to face FC Kansas City on May 13.

Seattle returns home to host the Washington Spirit, 4-3 winners over Sky Blue FC. In their last meeting, the Reign defeated the Spirit, 2-0.