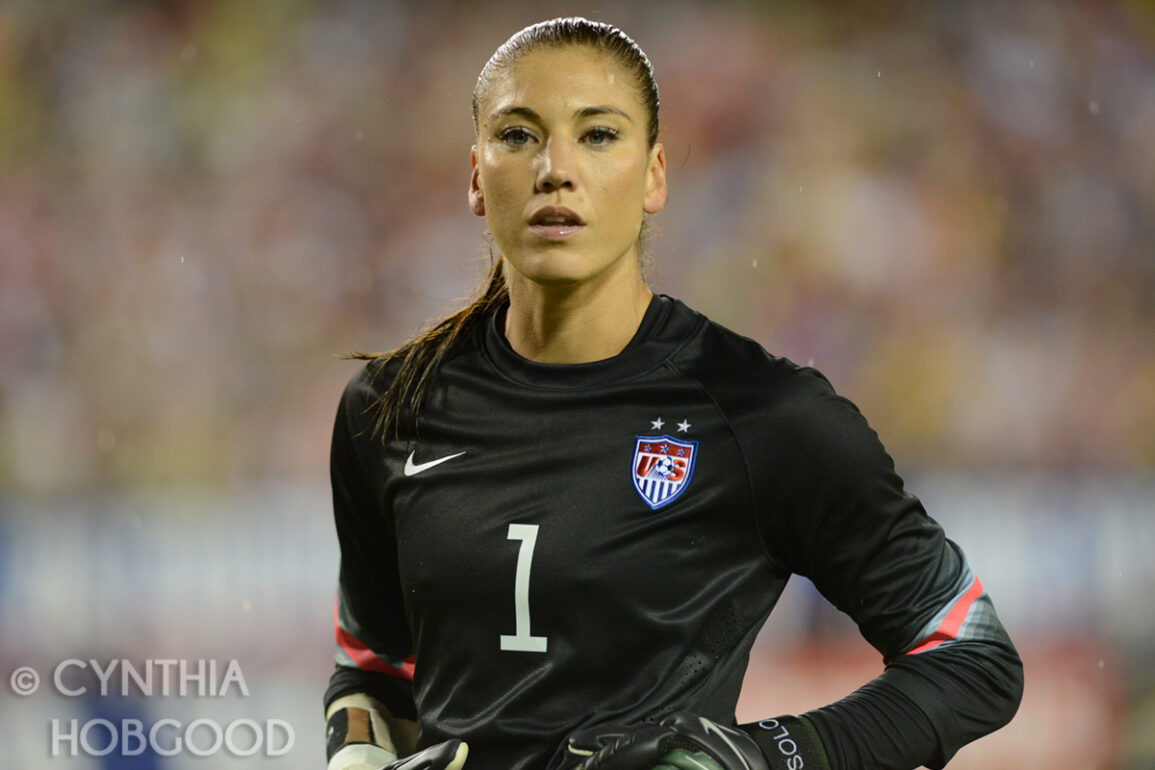 The United States defeated France, 1-0, in a Group G clash in Belo Horizonte, Brazil, on Saturday to take control over the group. Carli Lloyd’s second-half goal was the game-winner but Hope Solo, in her record 200th international appearance, was the difference for the United States.

It was a tale of two halves for the U.S. France started strong and looked like it had every intention to put together a dominant full-game performance. France has the personnel to press the U.S. correctly, and it was evident early with Les Bleues possessing in the midfield and testing the U.S. outside backs repeatedly. Defensively, France’s backline has the speed to match up with Alex Morgan, as was apparent when Griedge Mbock Bathy met her pace early on.

Beating the U.S. means making the backline defend. France did that, using their pacey wide players to keep U.S. outside backs Meghan Klingenberg and Kelley O’Hara on their heels on defense and for the most part, at home on offense. Kadidiatou Diani blew by Klingenberg within five minutes of the whistle, and several times thereafter. France switched the point of attack to the left often, using Louisa Cadamuro and left back Amel Majri to pin back their counterparts on the U.S. right side in Crystal Dunn and O’Hara, respectively.

France had a chance in the 16th minute off a set piece in what would become a familiar theme to the match. Wendie Renard met Cadamuro’s delivery head on and forced a fingertip save from Solo, one of several Solo would need to make in the match. Physically, no one on the U.S. can match up with Renard’s six-foot frame (not many can), and it showed the entire match.

Going forward, the U.S. wasn’t able to generate much and what it did generate was through Tobin Heath on the left side. Lloyd, and at times, Morgan, repeatedly had to drop back to get the ball; at other times, the spacing between Lloyd and Morgan was too wide, isolating Morgan.

It’s one thing to bomb your outside backs forward against teams that cannot match up physically and tactically, it’s another when your opponent can recognize and counter. In the 23rd minute, France showed (almost) how it could be done. Long played a ball out wide to a streaking O’Hara. France’s Majri read it well and was there to dispossess O’Hara. France headed the other way, playing out of the back from keeper Sarah Bouhaddi; the ball eventually landed at the feet of Camille Abily, who had too much time and space, picked out Delie over the top, who was in behind the U.S. defense. However, Delie squandered the chance and and the defense recovered.

The U.S. had moments of the possession game it’s been transitioning to since the World Cup. In the 24th minute, the U.S. strung together a series of passes that looked promising but didn’t produce a shot that troubled Bouhaddi.

In the 26th minute, Cadamuro had too much space and time and picked out a diagonally darting Delie from the right side who again got in behind the U.S. defense. Solo was there to parry away Delie’s left-footed near-post attempt.

The U.S. had a notion in the 30th minute but Bouhaddi tipped Heath’s free kick over the bar.

Solo would be called into action again five minutes before the half after Abily flicked a ball into the box toward Delie, who outmuscled an out-of-position Klingenberg and got a low-driven shot off that Solo smothered. The play started with Amandine Henry winning the ball in midfield and sending the ball out right. Brian tracked back but failed to disrupt the pass into Abily.

The U.S. headed into the break fortunate not to be down by one. Of note, Lloyd and Brian didn’t have much of the ball, and Dunn, such a threat centrally for her club team the Washington Spirit of the National Women’s Soccer League, didn’t have many meaningful touches. What did get going for the U.S. was through space on Heath’s side, and it often came when Brian distributed from a deep-lying position. Long wasn’t as effective in her distribution but did well at times to help the center backs. Lack of movement led to a lack of options when going forward.

The breakthrough for the U.S. came in the 63rd minute after Heath’s shot from the left side was deflected by Bouhaddi off the post and an unmarked Lloyd is there to bury the rebound.

France didn’t roll over. Head coach Philippe Bergeroo inserted Elodie Thomis in the 70th minute for Cadamuro. Cadamuro, so active with Majri on the left in the first half, was quiet for France to open the second half. The U.S. countered with Ali Krieger in for Dunn, who didn’t have a very productive game. O’Hara pushed up and Krieger slotted behind her (a right-side pairing that should get another look).

Renard had a chance in the 73rd when the U.S. failed to mark her on a free kick. Renard was wide open on the service from Abily but just missed getting a hair on it. Henry was there at the back post — having ran by two U.S. defenders for a complete breakdown on defense — but was unable to do anything with the ball that was hit a little long.

In the 77th minute, Jessica Houara sent in a cross from the right that an open Delie got a head on to force Solo to her right for the save. Poor marking led to another dicey moment for the U.S. in the 79th minute. Renard won the ball just past the half and started the attack forward to Elise Bussaglia who found Thomis on the right. Thomis crossed into the box where Delie made a near-post run taking the defender with her, and the cross almost found an unmarked Renard who had continued her run toward the back post and was a fraction late in getting a foot on it. Krieger was there to knock it out and what looked like an almost-own goal in real-time was actually a controlled clearance on replay.

The U.S. held on. France didn’t convert. Solo came up big. Lloyd did, too. And yet, the sky isn’t falling. France was always going to be the toughest test in the group stage for the U.S., a team in transition both in terms of personnel and tactics.

On to the next.

It’s the group stage, and the goal is to move on to the knockout rounds. For France, it will be up to Bergeroo to re-focus and rally a team that came close and will yet again be contemplating missed chances. But Les Bleues showed a fight that wasn’t always there in past performances.

For U.S. head coach Jill Ellis, she’ll have plenty to discuss with her team but this is a team that generally gets sharper the farther they progress in big tournaments. Ellis has chosen a versatile team and the question is whether she’ll show her own versatility and make the necessary adjustments and improvements to prepare the team for the quarterfinals. Last year’s World Cup points to yes.

The U.S., through to the quarterfinals after Australia drew with Germany, faces old foe Colombia in Manaus on Tuesday, August 9. For the U.S., with players ailing and a place secured in the next stage, expect to see changes in the starting lineup. France takes on New Zealand in Salvador.

France versus the U.S. in the group stage was the one circled on most calendars. It wasn’t pretty for either side but it did offer some talking points, most of which, to be honest, aren’t new, but were reinforced in this match.

Solo thrives in these high-stakes situations. It’s when she’s at her best and most focused, and it showed. Truth be told, Solo’s club performance coming into the Olympics hasn’t been the best so the question was there and she answered it. Saturday’s match marked Solo’s 200th international appearance, a record for any goalkeeper.

Taunts from the crowd are old news for Solo. If anything, try being quiet. That might unnerve her more.

France’s best player in the match and gave the U.S. fits on both sides of the ball. In the air, no one can challenge Wendie Renard, and on the ground, she frustrated Heath, Morgan, and Dunn with well-timed tackles to stifle any meaningful attacks. It was Renard who started and almost finished one of France’s best attacks in the match the 77th minute. She’s silky smooth, and at 26 years old, just getting started.

Set Pieces are a Strength and Weakness for the U.S.

One U.S. strength is set pieces. Tobin Heath can whip a ball in to find players or go for goal directly. Julie Johnston is excellent in the air and always a target. Against France, however, man marking on set pieces was horrible throughout the game. An early corner for France exposed the potential for breakdown; the U.S. will have to clean this up because a team more clinical in front of goal will make them pay for sloppy marking.

But France can match up with the U.S. and was able to possess in the midfield, especially in the first half, negating the U.S. transition and buildup play with Amandine Henry and Elise Bussaglia shutting down the middle, and the outside players taking away space for Dunn and Heath while keeping the U.S. outside backs at home. Which leads to…

The Defense Wasn’t the Best

For either team. On the U.S. goal, Lloyd started from the top of the six-yard box and was unmarked in her run to goal. For the U.S., team defense allowed too much time and space. Cadamuro had all the time in the world to pick out Delie’s run in the 26th minute. Renard’s run in from midfield is an example as she ran past three midfielders into space between Engen and Krieger, who has to rotate over faster in that situation. The U.S. center backs were not solid in organizing the line with Allie Long or Morgan Brian, which might have been the result of unfamiliarity with Engen in there in place of Julie Johnston. France showed that speed on the outside poses problems for Klingenberg, and teams would do well to exploit that for a full game, if they can — or until O’Hara is switched back to that side.

Needs more of the ball. Played a part in the goal and in one of the better chances the U.S. had in the 55th minute. It was her smart run up the left that put her in on goal, forcing Bouhaddi to come out to clear. Props to Lloyd for recognizing an offside Alex Morgan and holding the ball.