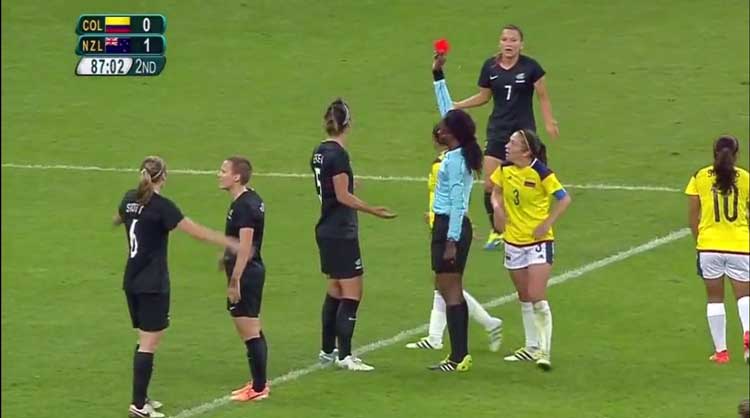 In a Group G match that both sides needed a result in order to keep their quarterfinal hopes alive, New Zealand took home all three points, defeating Colombia by a score of 1-0 on Saturday in Belo Horizonte, Brazil.

Colombia, while allowing New Zealand to control the majority of possession as they did against France on Wednesday, created their best chance of the first half 12 minutes after kickoff. Catalina Usme got behind the defense and latched onto a ball played over the top, only to see her effort go right at the goalkeeper.

But it was New Zealand who broke through on the half-hour mark as a reward for all of their possession up to that point. Betsy Hassett delivered a low cross from the right flank that squeaked past the lunging Hannah Wilkinson to find Amber Hearn. Hearn cooly took a touch and buried the eventual game-winner.

Las Cafeteras broke out of their defensive shell to start the second half and used their pace down the flank, often causing problems for the Football Ferns’ backline. Lady Andrade, who hadn’t seen a lot of the ball in the first half, showed off some nice skill down the left flank. Her cross was lacking, however.

They nearly found the equalizer on the hour mark as Usme’s free kick from an acute angle rattled the crossbar.

Colombia gained an added bonus in the 88th minute after New Zealand’s captain Abby Erceg was sent off for a soft challenge on Tatiana Ariza.

Moments later, Erin Nayler came up with a fine stop to deny Usme’s curling free kick, keeping her side in the lead.

But despite throwing everything forward, Colombia fell short and will need to win their final group stage match and get help elsewhere to advance to the quarterfinals. New Zealand are level with three points in the group, only trailing France by goal difference. Grabbing a third-place spot is possible for New Zealand, even with a loss on Tuesday, but they will need to keep the score close and hope to get favorable results elsewhere.

Both teams have unenviable opponents in their final Group G matches on Tuesday, August 9. New Zealand will be without the services of Abby Erceg due to her red card as they square off against France in Salvador, Brazil. Colombia will take on the United States, the group leaders, in Manaus, Brazil. Both matches will kick off simultaneously at 6pm ET.