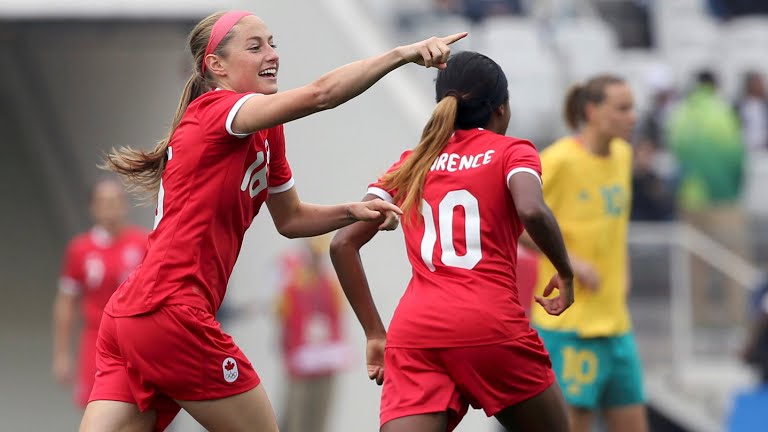 What is it about the Olympic tournament and Canada? Whatever it is, thank you! Canada opened up its Rio 2016 campaign with a 2-0 win over Australia in a Group F match in São Paulo on Wednesday.

Janine Beckie opened up the scoring just 19 seconds into the match, making the 21-year-old’s goal the fastest in Olympic history. Christine Sinclair intercepted a bad pass out of the back and found a wide open Beckie.

Not the start the favored Australians wanted but the Matildas settled down and Sam Kerr caused concern for Canada’s defense a few times, aided by some shaky moment from keeper Steph Labbe.

The record books would get another entry in the 18th minute, this time unfavorable for Canada. Forward Michelle Heyman got in behind the Canadian defense and was brought down by last defender Shelina Zadorsky. Zadorsky was shown a straight red card for denying an obvious goal-scoring opportunity, making it the fastest red card in Olympic women’s soccer history. Down to 10 players, Canada weathered the storm into halftime.

In the second half, Canada was awarded a penalty kick in the 73rd minute after Caitlin Foord was whistled for a handball in the box. Lydia Williams kept Australia in the game by diving to her right to deny Beckie’s kick from the spot.

Jessie Fleming almost doubled the Canadians lead in the 77th minute but Williams denied her in a 1-v-1 while the rebound was cleared to safety by Laura Alleway. Fleming was again in the mix when Canada added to its tally minutes later.

Fleming’s well-weighted ball found Sinclair on the break. Sinclair’s deft touch around an onrushing Williams created the space she needed to loft the ball into the back of an empty net to make it 2-0.

Australia brough on Lisa De Vanna and Kyah Simon for added offense but neither were able to muster anything significant.

It doesn’t get any easier for Australia. Germany, winners against an overmatched Zimbabwe, awaits on Saturday, August 6. Another loss and Australia is likely headed home after the group state. Canada faces Zimbabwe, but will be without Zadorsky, who will serve a one-game suspension for picking up a red card.