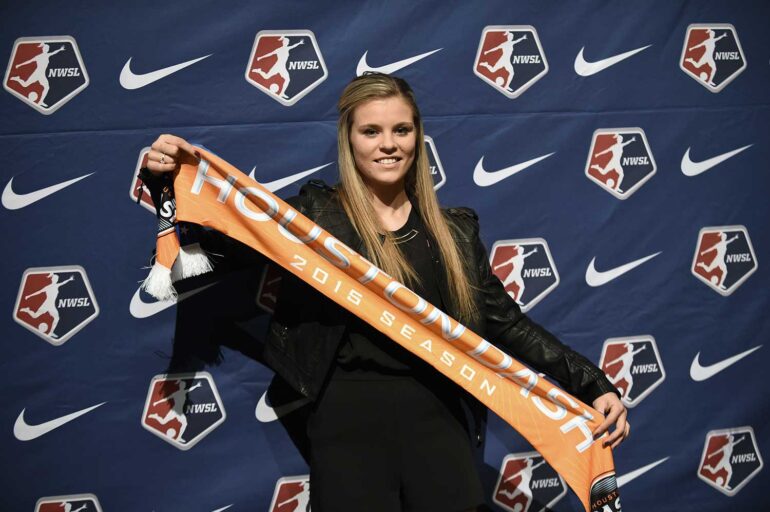 The 2015 NCAA season was a big one for Rachel Daly. The St. John’s senior forward scored 19 goals and broke the school’s career goals and points records with 50 goals and 111 career points, respectively. In addition to being named an NSCAA First Team All-American, Daly won the Big East Offensive Player of the Year award for the second time while also being selected for the All-Big East First Team for the third straight year. And Daly was part of a team that set a new single-season wins record for the school with 15 and won the Big East regular season crown en route to an NCAA Tournament appearance.

The Harrogate, England native saw her tremendous college career come to a close in proper fashion in Baltimore recently after she was selected sixth overall by the Houston Dash in the 2016 National Women’s Soccer League (NWSL) College Draft.

Daly will be part of a trio of first-round draft picks heading to Texas this spring, joining Notre Dame’s Cari Roccaro, who was selected fifth overall, and Texas Tech’s Janine Beckie, who was the eighth overall pick. They will join a Dash team coming off of a fifth-place finish in 2015 after falling six points outside of a playoff berth. Dash head coach Randy Waldrum believes that among the recent draft picks, Daly will be a player who can fit into his plans right away and become a major factor for the team.

“We are going to play her up front,” said Waldrum after the NWSL Draft. “Now with getting her and [Janine] Beckie in the draft, this will give us an opportunity to tweak our three-front system. We could play her as a target along with two wing players. We could play her with a two-front and have someone play underneath, or we can play her out wide on the wing. So I think she can give us the flexibility; but right now in what we have, we will play her right out as our target player.”

“It was a tough decision for me. I spoke to my family at home and I spoke with my coaches and people that have opinions I respect,” Daly said. “But ultimately I think it was the next challenge for me in my career. I’ve played in England, I’ve played at the top level in England, so I think that [playing in the NWSL] was the next step that I wanted to take on.”

Daly took her time to make the decision to ply her professional trade in the United States. But she has had to make tough decisions throughout her soccer career. Before committing to play at St. John’s, she played for Lincoln Ladies in the FA Women’s Super League. However, due to NCAA compliance regulations, Daly had to sit out a year before playing for the Red Storm because she had featured in the FAWSL.

So Daly did exactly that during 2012 season. The former England youth international watched games from the sideline though she was allowed to train with the team. Since then, she’s been a star for the team and in the process, played her entire collegiate career in a new position.

“In my opinion, she has improved a lot since [her first year in college], especially since she is in a new position as a forward, because originally she was a left back when we first saw her,” said Ian Stone, Daly’s head coach at St. John’s.

“When I first saw her, I always felt that she would turn pro somewhere but she has improved enough, obviously, so that she could get drafted in the first round of the NWSL, which in my opinion, is probably top to bottom, the best women’s league in the world.”

Daly’s improvement was something that Waldrum clearly liked when he was going through his notes on draft day. He said it was not only her goal-scoring record at St. John’s that struck him but also her work ethic and desire to be the best that were key factors in selecting her.

“She is highly competitive, she doesn’t like losing in anything,” Waldrum said. “She works her butt off in training every day and talking to Ian Stone about her, he just raved about the fact that sometimes it gets to a point where she gets frustrated where people aren’t working hard enough. And that’s a mentality that a good striker needs. She is not afraid of throwing her body against a goalkeeper or against a defender to fight to win a ball and the opportunity to score a goal.”

The Determination to Succeed

“In a way, her drive is what has gotten her to this point so far,” said Stone. “It wasn’t as easy for her growing up in terms of there wasn’t necessarily opportunities for her. To be honest, she wasn’t brought up with a family where there was a great deal of wealth and there has been a little bit of a battle for her. And that also adds to how good of a soccer player she is. It’s almost — she is, to use the analogy of another sport, a basketball player wanting to get away from the streets of where they grew up on. And it means so much more for Rachel. Soccer is Rachel’s life and she is going to find a way to make it work and that has always been her mentality.”

Anytime you speak with Daly, her confidence about her game is apparent. Players often talk about the internal motivation that gets them to the top. After being selected at the draft, Daly referenced that extra fight in her game and thinks it will be key to helping her fit in with her new team.

“I think I can bring mainly my knowledge of the game and how much I fight to play every time when I step on the field,” said Daly. “I think that is a good character trait for me to present for any team that I’ve played for.”

If Daly can translate her consistent play and goal-scoring rate from the college game to the NWSL, there could be a call-up to the senior England Women’s National Team in her near future. Once a member of the England U-17 National Team at the 2008 FIFA U-17 Women’s World Cup and a participant in England U-19 and U-23 camps, it might only be a matter of time before the big call comes.

With the women’s game receiving a boost in England after the team’s recent success at the Women’s World Cup in Canada, Daly believes more players from England can follow in her footsteps by developing their games in the United States’s college system and then continue to play in the NWSL before getting a full England call-up.

“I think there is a lot of talent in England and I would hope they would come and do what I did and follow their career in education and then play and take it on to the next level.”